State of a Zim worker lamentable 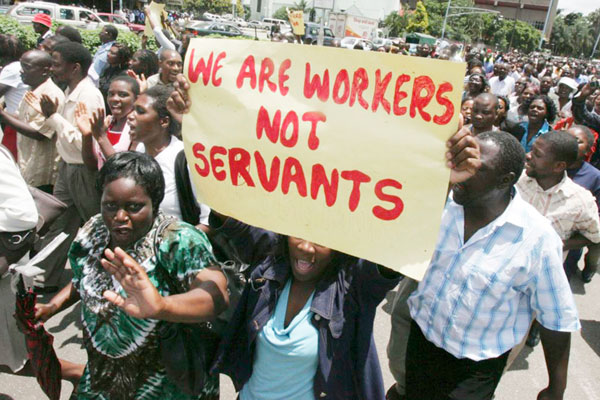 AS the world celebrated Workers Day yesterday, my heart bled with sorrow about the current conditions of the majority of workers in Zimbabwe.

One of the reasons that led to the liberation struggle was the worker’s struggles, need for self determination, equal opportunities and land. But 42 years after independence, workers are now in a worse situation. The gains of the liberation struggle have been reversed by a governance system that is anti-worker and leaders who are greedy, selfish and corrupt.

The struggle for emancipation by the Zimbabwean workers has its roots in the happenings of the late 19th Century. After obtaining the Rudd Concession, the whites rushed to obtain the Royal Charter from the Queen of England.

If one reads this colonial document together with the Rudd Concession, one will realise that it was these documents that stripped the Zimbabweans of their right to own resources and turned them into labourers. The 1893 and 1896 rebellions were efforts by natives to reject being reduced to second class citizens in their own land.

The First Chimurenga was not only a fascinating protest and African struggle rallying against colonialism, but a rejection of the colonial socio-economic system. However due to superiority of fire power, the native lost and the country was turned into a reserve of labourers for the emerging colonial State.

The case of the Zimbabwean worker today is a sad story. Over 80% of the working class is living below the poverty datum line. Many Zimbabweans have been forced to seek refugee in foreign lands where they not only sell their labour cheaply, but under conditions which can be referred to as modern-day slavery.

To make matters worse, the agents of imperialism stripped Zimbabwe of its national dignity by taking away its investment power — Zimbabwean dollar. Without a local currency, Zimbabwe will not be able to create wealth to cause economic growth.

In 1999, workers formed what they thought was a workers’ party to avert a looming economic crisis.

Unfortunately, the neo-colonialists saw through the vision and sneaked into party’s ranks and hijacked the revolution. Instead of championing the cause of workers, the party worked hard to advance the interests of former colonisers. This has been evidenced by its call for the imposition of sanctions on Zimbabwe, political intolerance and hate.

It is also sad to realise that despite having given birth to the party we, the workers and citizens no longer have a voice in the movement.

We the workers and disadvantaged groups of Zimbabwe also realise the spirit of pan-Africanism which fuelled the revolutions for political emancipation. We, therefore, take it upon ourselves to work to rekindle this flame and push fellow workers throughout Africa to redirect all efforts towards getting the continent to take her place at the global table.

It is our right for Africans  to demand humane treatment of their peers and refusal to be referred to as a third world. We have developed cultural values and technologies which have contributed immensely to the modernisation of the world and so we demand fair treatment.

As such, Labour,  Economists African Democrats (Lead) is advocating for the payment of reparations by Britain and other countries that benefited from our mineral resources and cheap labour during the colonial era.

We implore government to give priority to finding a lasting solution to the plight of civil servants, war veterans and workers in Zimbabwe.

The country’s President Emmerson Mnangagwa is on record stating that nyika inovakwa nevene vayo (a country is developed by its citizens), a philosophy we agree to and also add that nyika inovakwa nevene vayo vakaguta, vanezvikwanisiro zvakakwana (a country is developed by its well-resourced citizens). In the spirit of “leaving no one behind” which was this years Independence Day theme, we humbly request President Mnangagwa not to leave the workers behind as they are key enablers of inclusive economic growth. A demotivated worker is unproductive. We demand decent salaries for workers and safe working conditions.

As long as workers are not in government, nothing will change. We will not stop until the means of productions are in the hands of a worker-led government.

We will not stop until we have created a social democratic society directed by a workers’ government. It is time to Lead! Together we can achieve labour reforms while united in our diversity.