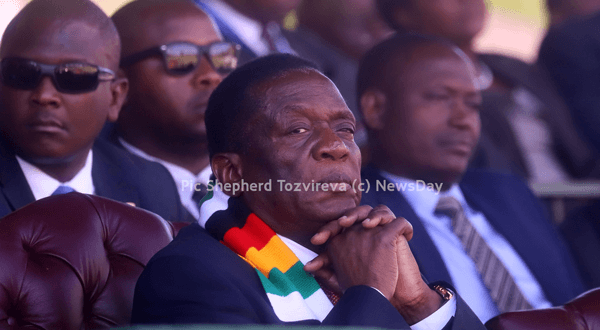 In a joint statement, the heads of mission for Canada, Germany, Netherlands, Norway, Poland, the United States and United Kingdom, also ordered Mnangagwa to stop stifling citizens’ rights under the guise of enforcing COVID-19 lockdown measures.

“We ask the government to move away from such language and instead to deliver on its long-promised reforms and reach across the divides. We hope this government is able to deliver on its initial vision and live up to commitments it made when it came to power,” the diplomats said.

This was in apparent reference to recent government claims that Western diplomats and church leaders were pursuing a regime change agenda by funding opposition activities.

But government immediately dismissed the remarks as misdirected, challenging the diplomats to follow formal procedures if they had grievances against Mnangagwa’s administration.

The diplomates added: “Two years ago in his inaugural speech, President Mnangagwa vowed to serve the country and its entire people. It is in this spirit that the heads of mission express their deep concern with the current political, economic, social and health crisis that most Zimbabweans are facing today,” they added.

The statement came in the wake of a surge in human rights abuses in the country which has seen journalists and several opposition activists arrested for voicing concern over high-level corruption and intolerance to divergent views. Several other activists have also gone into hiding for fear of political persecution, with the opposition MDC Alliance claiming that its supporters and leaders were now under siege.

“But COVID-19 must not be used as an excuse to restrict citizens fundamental freedoms, freedom of the Press, of opinion, of expression and of assembly are all universally recognised human rights and are guaranteed by the Zimbabwean Constitution. The government also has a responsibility to investigate and prosecute those responsible for violating human rights,” the envoys added.

The Western diplomats said they would continue supporting citizens’ quest for democracy.

“We stand with the people of Zimbabwe in their desire for a peaceful and prosperous democracy. It is because we care about the people of Zimbabwe that our governments provide extensive humanitarian assistance to those affected by drought, natural disasters and disease including the new global pandemic of COVID-19.”

“The heads of mission further reiterated their calls for the government to address corruption and the illicit extraction of Zimbabwe wealth for personal gain which continue to undermine Zimbabwe’s development and wellbeing of its people. If Zimbabwe is to reach its potential, its wealth and resources must be used to serve all Zimbabweans,” they said.

They added that Zimbabweans had a right to engage in dialogue to build a better future for their country, but the necessary discussions were being hindered by unhelpful rhetoric and blame assigned to several groups, including diplomatic missions and no-State actors.

Several organisations, regional and international organisations, including church leaders have of late openly expressed concern over government’s clampdown on dissent and arrest of perceived anti-government activists on trumped-up charges.

Contacted for comment over the diplomats’ statement, Information minister Monica Mutsvangwa said: “Diplomats accredited to Zimbabwe have a proper channel of communication through the Ministry of Foreign Affairs of the host government as it is not a letter. Therefore, I have no comment other than to dismiss it.”