Illustrious, dedicated and decorated war liberators who sacrificed their lives at a tender age to the cause of Zimbabwe, national hero Morton “Dizzy” Paul Malianga and heroine Dr Ellen Gwaradzimba (Cde Shee Tapera) were buried at the National Heroes Acre in Harare yesterday. 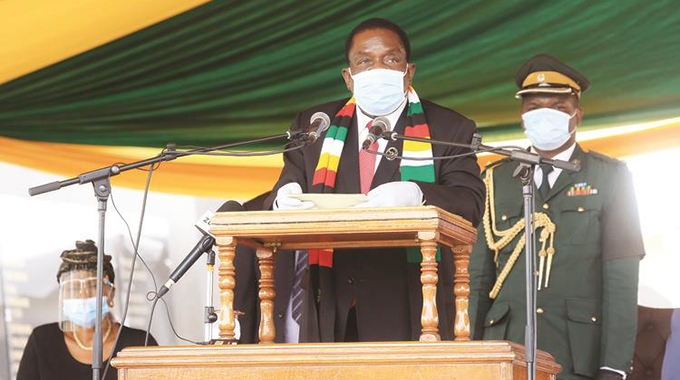 Cde Malianga died on January 15 after a short illness, while Dr Gwaradzimba succumbed to Covid-19 complications on the same day.

The joint burial at the National Shrine was presided over by President Mnangagwa, with Defence Minister Oppah Muchinguri-Kashiri, Information, Publicity and Broadcasting Services Minister Monica Mutsvangwa and Home Affairs and Cultural Heritage Minister Kazembe Kazembe also in attendance, among other senior Government officials and service chiefs. 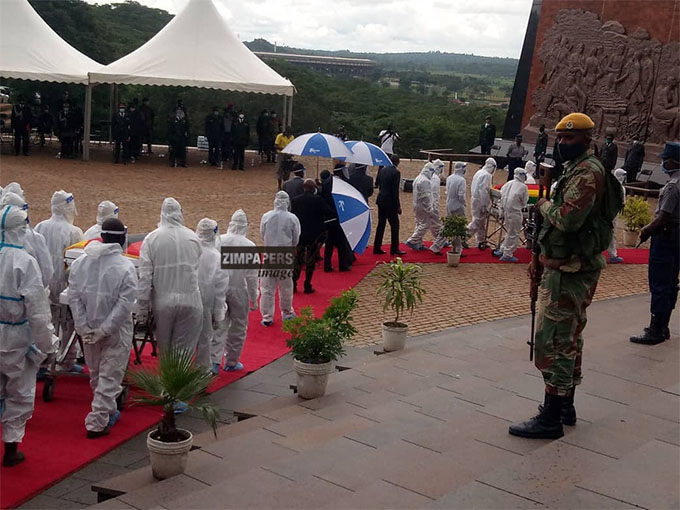 A sparse crowd gathered at the national shrine to witness the double burial, which is the third such ceremony following that of national heroines Cde Victoria Chitepo and Vivian Mwashita in 2016 and Cde George Rutanhire and Cde Maud Muzenda in 2017.

Covid-19 protocols were followed in line with the World Health Organisation regulations during the burial.

A limited number of mourners were allowed and only five members of each family were allowed to proceed to the graveside.

The bodies arrived at the National Heroes Acre around 11am aboard Doves Funeral Services hearses that were being led by two gun carriages. 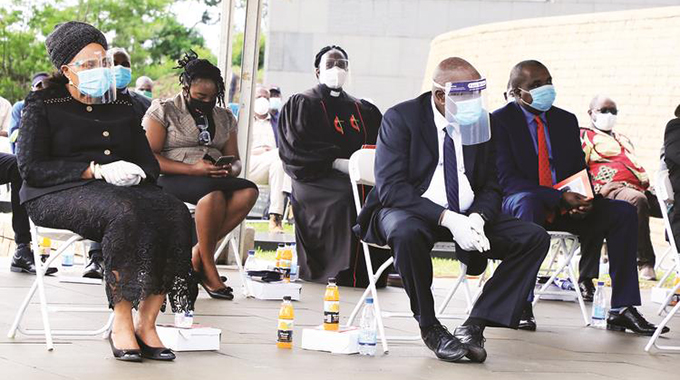 The shrine was engulfed in a sombre atmosphere with close relatives and mourners watching from a distance.

Pallbearers clad in white personal protective equipment pushed the caskets draped in national flags on trolleys to the Tomb of the Unknown Soldier in a slow march.

UMC pastor Reverend Josephine Bopani gave a prayer and short sermon before representatives from the families of the two heroes took to the podium. Rev Bopani’s message gave hope to the people of Zimbabwe traumatised by the deadly Covid-19 pandemic which had killed over 879 people by yesterday.

She read from Psalm 125 verse 1-2 which says: “Those who trust in the Lord are like Mount Zion, which cannot be shaken, but endures forever. As the mountains surround Jerusalem, so the Lord surrounds his people both now and forever more.” 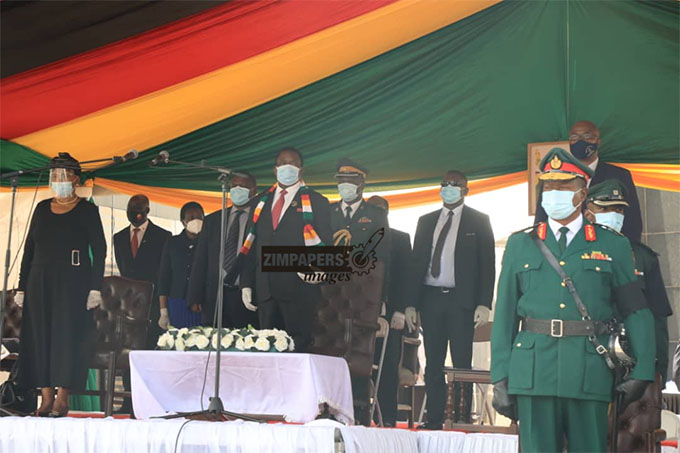 President Mnangagwa will preside over the ceremony

Rev Bopani said Zimbabweans should now look up to God for protection from the pandemic.

Zimbabwe Republic Police choir also put up a polished performance with their songs and dances, with the Imbube Group churning out songs that comforted mourners.

“Malianga was well known for his committed participation in the liberation struggle,” he said. 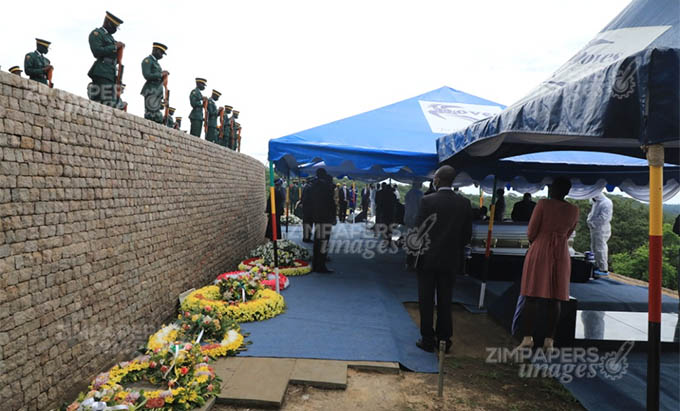 “He was a pastor and at one time a Methodist editor. He was also instrumental in the formation of the NDP.”

Dr Gwaradzimba’s son, Remembrance, eulogised his mother, who was also known as Auntie Gwa, Doc, Cde Shee, Mafirakureva and mother, among other names.

“I called her shamwari,” he said. “She had a unique personal relationship with each of her sons. We had a strong bond with our mother. She had many non-biological children.

“We have lost a confidante, pillar of hope, visionary and a loving mother. We are thankful for the time we lived with our mother.”

President Mnangagwa applauded the two who sacrificed lives, careers and families to break the yoke of colonial bondage that was wearing down the indigenous people in the country. 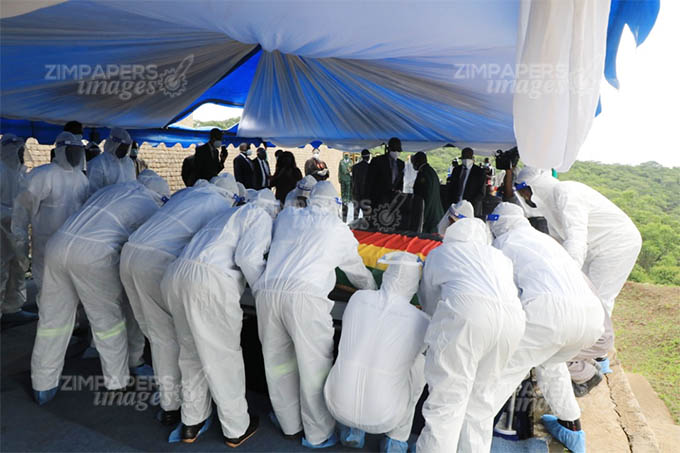 “It was the spirit of patriotism, bravery and selflessness that propelled them to confront the enemy, even from a seemingly weaker position,” he said.

“This conviction to make their individual and collective contribution was inspired by the ideological consciousness for the need to attain sovereign independence and freedom to determine our own destiny.

“Most of our departed comrades, including the two we are bidding farewell today, envisaged a free and prosperous Zimbabwe that knew no discrimination based on colour, race, religion, political affiliation, gender or creed. Until now, this is the Zimbabwe we all want and indeed the Zimbabwe we must all work hard to realise.”

War veterans leader, Cde Christopher Mutsvangwa, said Cde Malianga was there as a young man from the beginning of colonial resistance. 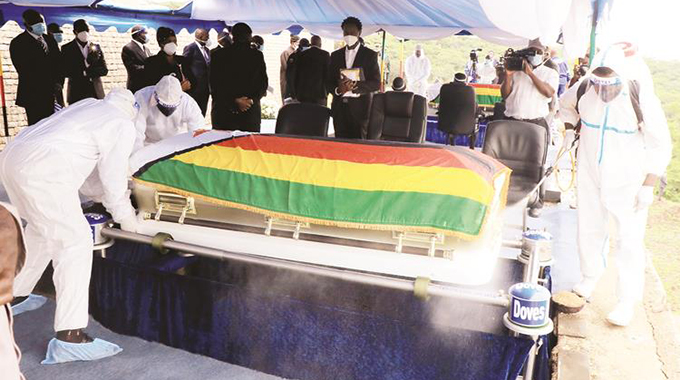 “Now we have our own army, the ZDF,” he said. “It owes its origins to Morton Malianga for organising the pioneer cadres to go for military training and set up the guerilla movement which would become a whirlwind by 1979.”

Cde Malianga was one of the few surviving nationalist leaders of the struggle for national independence.

At independence, he was appointed senator in the first Parliament of Zimbabwe and later held several deputy ministerial posts.

He was a central committee member at the time of his death.

Dr Gwaradzimba abandoned school at age 16 to pursue politics and joined the liberation struggle in Mozambique and later trained in Tanzania. She rose through the ranks to detachment commander level in the provincial command structure.

At independence, she pursued her education and remained active in politics.

She sat on several boards and spearheaded development programmes in Manicaland where she was Minister of State for Provincial Affairs and Devolution until the time of her death.