Farmers are still waiting to realize the dream of Zimbabwe’s fast-track land reform, and their children’s makeshift schools are a symbol of that long struggle.

KAROI, ZIMBABWE — Most students at Tanaka Mandava’s school meet in old tobacco barns. Plaster peels off the walls onto the dirt floors of their classrooms. Panes are missing from the windows, and on rainy days some students must move to avoid getting wet.

Tanaka, 10, is in the fifth grade. Because of a shortage of teachers, students and classrooms, she has to learn with sixth-grade students.

She and her classmates are among thousands of students who attend so-called satellite schools, created 20 years ago to serve black farmers who needed basic services after the government resettled them on larger, more fertile fields. Until then, white commercial farmers owned most of Zimbabwe’s choicest plots of land.

The resettlement program, known as fast-track land reform, promised greater economic opportunity and stability to Zimbabwe’s black majority. But that prosperity has eluded many black farmers. Instead, those in resettled areas remain among the country’s poorest citizens.

Satellite schools are a stark symbol of that stalled progress, as many hobble along with few resources, and annually earn the lowest scores on Zimbabwe’s critically important public exams.

“The main problem we are facing is that parents do not have a source of income to pay school fees and buy books,” says Gracious, the headmistress of Tanaka’s school, who asked not to use her full name because she feared retribution from government officials for discussing the school’s inadequacies. Blessing Tinarwo, 11, a sixth-grade student at a satellite school in Zimbabwe, prepares for a lesson with his classmates. The headmistress of the school says many students’ parents can’t afford to buy textbooks and other materials.

“When we are talking about the coming in of free education, it needs to be targeted at satellite schools so that we can invest in their infrastructure and in making them reasonable schools for the kids to attend,” says Priscilla Misihairimbwi Mushonga, chairperson of the Parliamentary Portfolio Committee on Primary and Secondary Education.

Between 2006 and 2018, the number of primary satellite schools shot up by almost 42% to 1,029, according to government figures. Many of them are found here in Mashonaland West province, where Tanaka’s satellite school is located.

During fast-track land reform, scores of black farmers were resettled in this farm-rich province, 139 kilometers (86 miles) west of Harare, Zimbabwe’s capital. Today satellites make up 31% of the province’s schools — the highest percentage in the country.

“Satellite schools are not going to disappear overnight,” says Caiphus Nziramasanga, who led an education commission inquiry in 1998.

This wasn’t the plan 20 years ago.

Back then, the land reform program handed property to at least 150,000 black farmers with the promise of food security and economic empowerment. Instead, a host of challenges have held them back, including lack of seeds and fertilizer and little access to machinery and financing. As of 2017, the government reported, about 83% of the resettled and communal farmers lived in poverty. 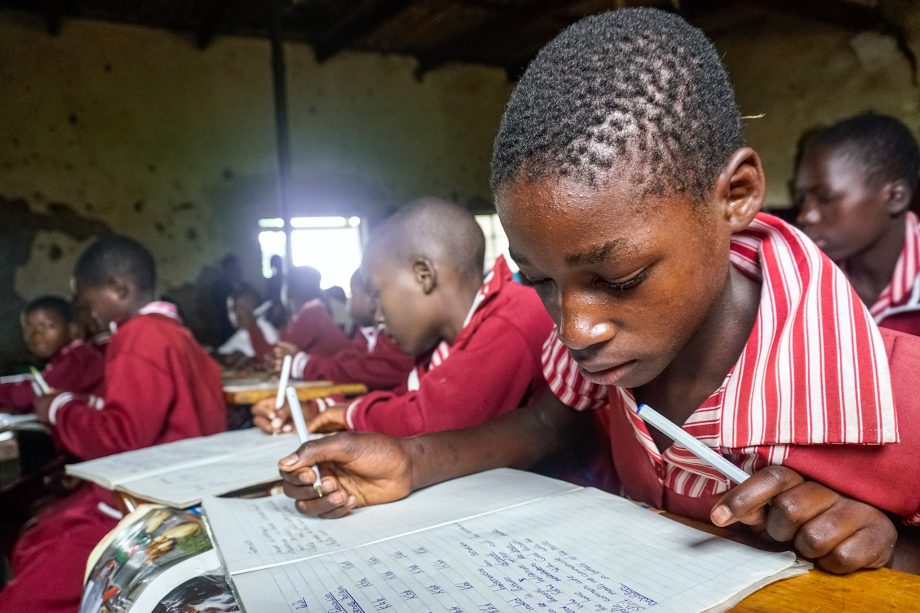 Fifth-grader Faith Muzeya (left), 10, shares a desk with sixth-grader Sarudzai Muchidzagora, 12, as they learn in the same class because there aren’t enough students, teachers and rooms to separate the grades at their Zimbabwe school.

“The infrastructure is bad for most of them,” Mushonga says. “It’s raining now, and some pupils sit outside. Some learn in barns. Reading materials and teachers are limited. This is not an ideal learning setup.”

Tanaka’s school sits a few meters from the Chirundu highway that leads to neighboring Zambia. Nearby are thatched huts and clay-brick houses, surrounded by small patches of farmland.

Built in 2002 for resettled farmers, the school hosts 339 students, from toddlers in early childhood development classes up to seventh-graders. There are seven teachers. (Some urban primary schools enroll as many as 2,000 students.)

The school, which charges fees of 30 Zimbabwean dollars (ZWL) (36 cents) per term, has only one classroom, used for early childhood development students. It offers few extracurricular activities. There are no netball hoops and no football pitch — staples at many schools.

Administrators have managed to buy desks, but students have few textbooks.

Miriam Mangwiro, mother of a first-grade student, wants to send her child elsewhere, but can’t afford anything else.

The lack of proper classrooms is “a health risk,” says Mangwiro, who grows tobacco and maize. “Such learning facilities aren’t good for students.”

Still, Gracious and her staff press on. In particular, they have paid special attention to raising scores on public exams. Since 2017, the headmistress says, her school’s pass rate has climbed from 24% to 34% last year.

“We have managed to do our best,” she says, “despite the challenges we are facing.”