HARARE – Edmund Kudzayi, the Sunday Mail editor has been remanded in custody to Monday pending his bail application.

He is being charged with subverting a constitutional government by attempting to commit an act of insurgency, banditry, sabotage and terrorism. 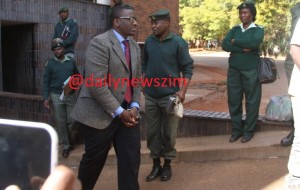 The 28-year-old is also being charged with undermining the authority of the president by publishing false statements prejudicial to the state as well as failing to secure ammunition.

Kudzayi was arrested on Thursday after police raided the Herald House, the headquarters of the state-controlled Zimpapers stable.

Kudzayi was not in the office at the time of the raid but he was later arrested at his lawyer’s offices.

He was appointed to head the Sunday Mail in April much to the chagrin of some Zanu PF heavyweights and seasoned scribes at Zimpapers.

Following his appointment in April, the State media described Kudzayi as “a media consultant with a strong technical background in software development and digital media.”

Kudzayi was linked to the online news website The African Aristocrat which in 2010 published stories about the first family’s personal lives. Kudzayi is also linked to the Facebook page Baba Jukwa.