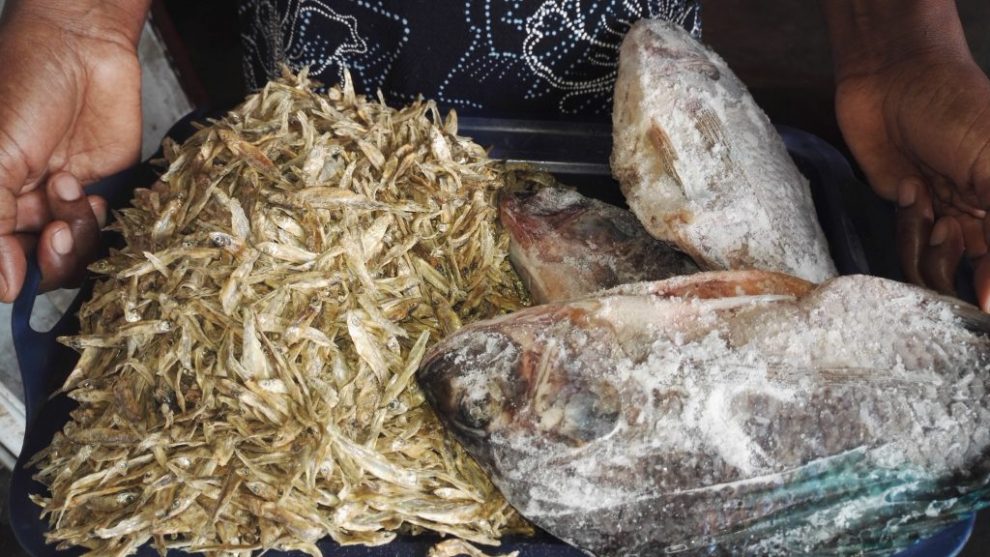 The kapenta (Tanganyika sardine) and bream fish sold by Sarudzai Moyo is a major source of income for her and great source of nutrition in the diet for struggling Zimbabwe families. Credit: Ignatius Banda/IPS

BULAWAYO, Zimbabwe (IPS) – Sarudzai Moyo, a former teacher, has begun a new career as a fishmonger. Once a week she makes the 450km journey from Bulawayo to Binga, on the shores of Lake Kariba, where she buys between 100 and 150 kilograms of fish for resale as the demand for cheaper dietary options increase in Zimbabwe.

Fishermen sell a kilogram of fresh bream and kapenta (Tanganyika sardine) for $1, but back in Bulawayo Moyo sells a kilo for $3.50. A kilogram of beef sells for between $4 and $7 depending on the grade.

Business is brisk, Moyo tells IPS, but with more and more people leaving their formal jobs to pursue other income-generating ventures in sectors already flooded with unskilled labour, researchers say this is putting a huge strain on the sustainability of natural resources such as fisheries.

However, as more nets are cast into Lake Kariba, which lies on the Zambezi valley — a riparian boundary shared by Zimbabwe and Zambia — this has raised questions about the long term ecological effects and how these natural resources will be able to provide a source of livelihood for communities. Especially since the Food and Agriculture Organisation of the United Nations (FAO) says 90 percent of the country’s fish production comes from Lake Kariba where Moyo and others are earning their incomes.

The Barilla Centre for Food and Nutrition (BCFN) has noted that there is a connection “between good nutrition and the environment,” and the need to “take action on education programmes and awareness campaigns to make production and consumption patterns healthy and sustainable”.

In fact, the Food Sustainability Index (FSI), created by BCFN and the Economist Intelligence Unit, ranks Zimbabwe 70.5 out of 100 — where 100 is the highest sustainability and greatest progress towards meeting environmental, societal and economic  for sustainable agriculture.

But in a country where incomes remain low, environmental and sustainability considerations have been trounced by the need to survive.

Tinashe Farawo is a spokesperson of the Zimbabwe Parks and Wildlife Management Authority (ZPWMA), a government department tasked with protecting the country’s wildlife through the sustainable utilisation of natural resources for the benefit of present and future generations.
Farawo says while overfishing concerns have been raised in the past, the continuing entry of new and unregistered players in Lake Kariba has made it difficult to effectively create a sustainable ecological balance.

“Ever since the Kariba dam was built in 1958, the regulation has always been that at any given time there must be at least 500 fishing rigs in order to protect the resource for both current and future generations,” Farawo told IPS.

But a joint Zimbabwe-Zambia fisheries management committee last year found that “kapenta rigs operating on Lake Kariba is approximately 3 times above the optimum”.

With population growth on both sides of the Zambezi and the exponential growth of demand for fish, the number of rigs has ballooned with fish poachers being blamed for ecological degradation.

“Concerns of overfishing in Lake Kariba, especially of kapenta, have been an issue for a number of years now, and the trend has been growing and will probably continue to grow in the near future,” said Crispen Phiri, a fisheries scientist at the University of Zimbabwe’s Lake Kariba Research Station.

“The slowdown in economic performance in both Zambia and Zimbabwe over the last decade or so has led many people to consider fishing or the buying and selling of fish as a full time or fallback livelihood alternative,” he told IPS by email.

“Everyone and anyone can now cast their net and we need scientific explanations about the long term effect of this trend on our fisheries. One of the approaches we have pursued is trying to stem the excessive reliance on the Zambezi for fisheries by decentralising and creating other fisheries projects in other dams across the country,” Farawo told IPS.

Zimbabwe has previously banned issuing of new fishing licences in the Zambezi, citing concerns about the excessive fishing activities.

According to ZPWMA, annual fish hauls at the turn of the millennium stood at around 27,000 tonnes annually but dwindled to the current 15,000 tonnes.

FAO has commented that “kapenta was an important, affordable and accessible source of fish protein and nutrition in a difficult 2007-2008 period when the macro-economic climate was harsh”. Today, Zimbabwe finds itself replaying the hardships of that period, economic commentators say. So it is no surprise that poor families are once again turning to fish diets. Indeed, the FSI ranks Zimbabwe as 53.2 on a scale of 100 for nutritional challenges.

The BCFN says while nutrition and dietary needs is a priority, there is a need to “raise awareness on the systematic connection between good nutrition and the environment, take action on education programmes and awareness campaigns to make production and consumption patterns healthy and sustainable”.

This, BCFN says, will ensure the realisation of the U.N.’s Integrated Sustainable Development Goals and the 2030 Agenda “which are all directly or indirectly connected to food”.

Yet researchers have also found the effect of a warming climate on sources of dietary needs such as fisheries, further compounding the sustainability of those resources.

“In a recent analysis that I and my colleagues did, we concluded that the increase in fishing efforts has been a major factor in the decline of kapenta catches and this has been worsened by the warming of the climate,” Phiri said.

For fishmongers such as Moyo, and the fishermen who supply her fish, these challenges could threaten their livelihoods, and the diets of those poor families who have turned to fish as a cheaper food source.