‘Taken over by monkeys and baboons’ – Zimbabwe Vigil Diary 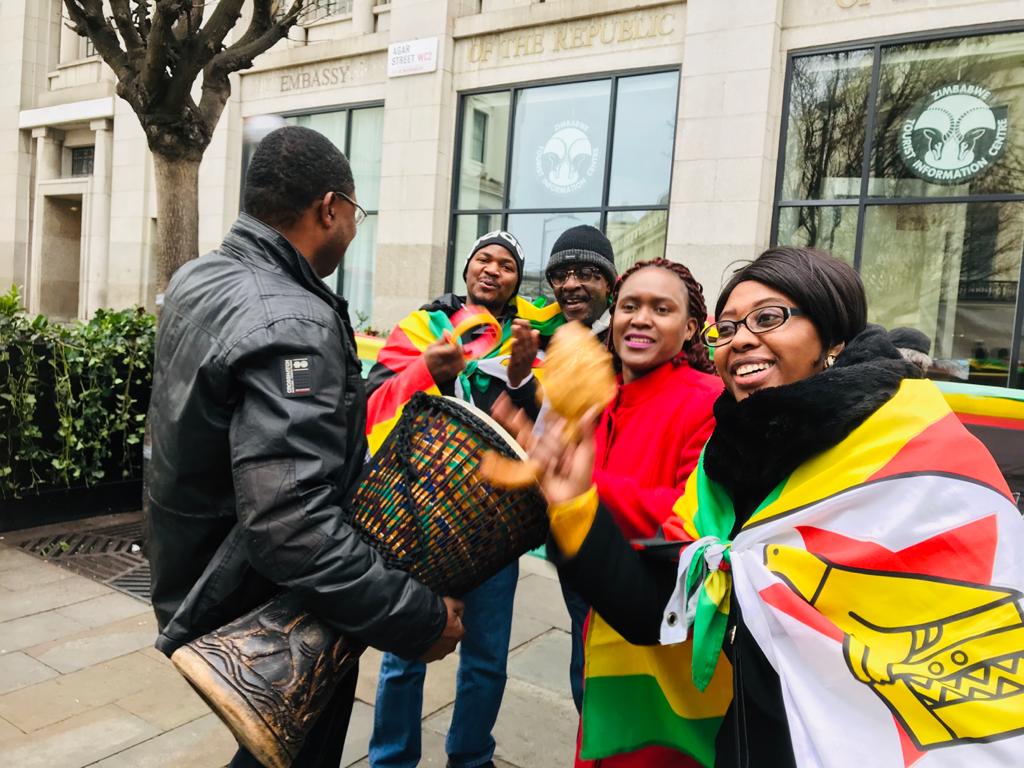 It is not surprising that runaway former minister Saviour Kasukuwere should use Friday’s absurd Mugabe Day to attack the regime which overthrew the former president. Predictably defending Mugabe, Kasukuwere said Zimbabwe’s situation was worse under Mnangagwa who, he said, was protecting corrupt criminal cartels who were raping the nation, bleeding it of billions of dollars (see: https://bulawayo24.com/index-id-news-sc-national-byo-179741.html),

Many Zimbabweans appear ambivalent about the change of regime. They include youths who are meant to be inspired by a public holiday on Mugabe’s birthday. Cathy Buckle in her latest Letter from Zimbabwe says ‘it’s hard to see what our youth have got to celebrate. Unemployment around 90%, inflation over 500%, queues for money, food and fuel and not even electricity today. Hopes of getting a job are extremely slim; manufacturing capacity predicted at 27% this year and a guarantee of tear gas, police truncheons and brutality if you dare to demonstrate.’

Buckle’s comment about a clampdown on dissent is confirmed by a news report of a wave of arrests of people taking part in anti-government protests against the worsening political and economic crisis (see: https://bulawayo24.com/index-id-news-sc-national-byo-179751.html).

In her letter, Cathy Buckle looks at how food aid supposed to feed the hungry is being diverted to the black market by corrupt officials in Zimbabwe and sold in neighbouring countries: ‘A Parliamentary Portfolio Committee heard that abuse of the subsidised maize facility was rife. Senior executives in the government’s GMB (Grain Marketing Board) were implicated: allocating subsidised maize to millers far in excess of their capacity. The millers were in turn diverting the maize to the black market and selling it to neighbouring countries, making huge profits in the process. There were accounts of trucks from the DR Congo offloading copper in South Africa and on their return journey through Zimbabwe filling their empty trucks with our subsidised maize. The corruption extends to border officials who stamp documents with false declarations as to the source of the cargo on trucks which proceed to exit Zimbabwe loaded with our cheap maize.’

She goes on to note that 20 years ago this week the farm invasions began: ‘twenty years later Zimbabwe as a whole continues to pay the price of the destruction of commercial agriculture’ (see: http://cathybuckle.co.zw/looting-cheap-food-from-hungry-zimbabweans/).

Buckle’s comments are backed up by a coruscating news report: ‘Factories grind to a halt as Zimbabwe’s economy implodes’. The article notes: Zisco’s once-imposing steelworks are a series of derelict buildings, rusting pipes and sheets of corrugated iron. As the natural bush encroaches, the buildings are increasingly home to ever-opportunistic monkeys and baboons.’  (See:  https://finance.yahoo.com/news/factories-grind-halt-zimbabwe-economy-050000822.html),