The former Zimbabwe Finance Minister has been convicted and fined for announcing his own results for presidential polls in 2018. 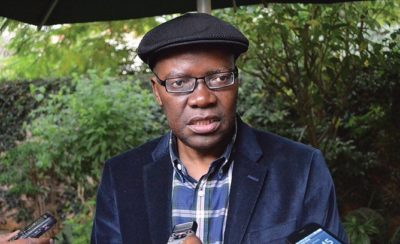 HARARE, Zimbabwe – A Zimbabwe court on Monday convicted leading opposition figure Tendai Biti of an election crime and fined him for announcing his own results for presidential polls last July, which he claimed he won.

Biti, a respected former finance minister, proclaimed his Movement for Democratic Change (MDC) the victor of the contested July 30 poll which sparked anti-government protests that were put down by soldiers.

Six people were killed in the violence.

Magistrate Gloria Takundwa ordered Biti to pay $200 — the price of a full tank of petrol — or go to prison for a week. He was also handed a jail term of six months, which was suspended for five years.

MDC leader Nelson Chamisa, who was in court, said the conviction “casts a very dark shadow on our politics”.

Zimbabwe was thrown into chaos following the elections, the first in the country’s history not to feature former president Robert Mugabe following his resignation in the wake of a brief military takeover in November 2017.

President Emmerson Mnangagwa had promised not to repeat the rigging and intimidation that characterised previous votes, but delays in announcing results enraged the opposition and led to street demonstrations.

Mnangagwa, Mugabe’s successor at the head of ruling party ZANU-PF, was later declared the winner according to the official results, but the MDC claims the election was rigged.

Biti fled the country for neighbouring Zambia at the height of the poll tensions but was returned to Zimbabwe despite seeking asylum, sparking an international incident.

The international community has urged Mnangagwa to guarantee the safety of Biti, who was the internationally-respected finance minister in Zimbabwe’s 2009-2013 power-sharing government.