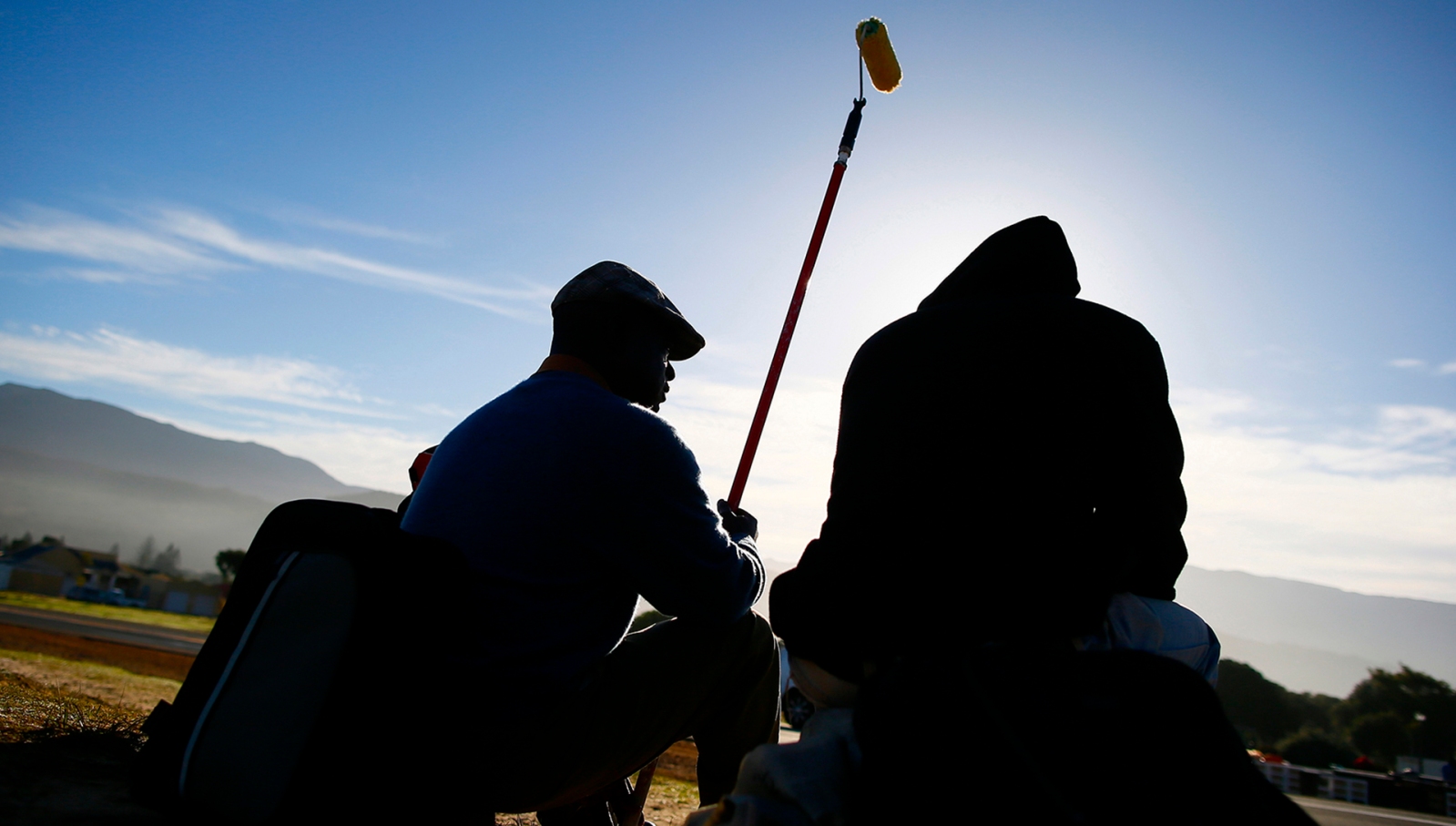 Builders and painters from Zimbabwe wait on a roadside for work in Cape Town. (Photo: EPA / Nic Bothma)

A firestorm of xenophobic threats is still just hot air as the Helen Suzman Foundation pushes ahead to challenge Home Affairs’ decision to terminate the Zimbabwean Exemption Permit.

Trolling, trash talk and threats have been mounting against the Helen Suzman Foundation after it announced this week that it had launched a legal challenge to the Minister of Home Affairs’ decision to terminate the Zimbabwean Exemption Permit (ZEP).

But the chief executive officer of the foundation, Nicole Fritz, is standing firm, pushing back and pushing forward. Fritz says the ZEP, which is a special dispensation permit, is now well over 10 years old and gives legal protection to an estimated 178,000 Zimbabwean nationals to live, work and study in South Africa.

A Cabinet decision in January said the arrangement must be terminated by December. Fritz says options for those who want to apply for other forms of residency permits in time in order to stay in South Africa legally have been “illusionary options”.

“Most of the Zimbabweans in the country aren’t eligible for work permits for critical skills; they aren’t people who can make a considerable investment in South Africa; or will realistically be successful in gaining asylum status, given Home Affairs’ massive backlogs. Many asylum seekers had also started the process, then were diverted to the ZEP,” she says.

The foundation says that given these unrealistic parameters, the termination of the ZEP exposes thousands of people who have made South Africa their home, raised families and built careers here over the past decade, to either be forced to remain in the country as undocumented foreign nationals or to return to a Zimbabwe that is still economically and politically uncertain.

“We are asking for a review of the decision; for the matter to go back to the minister for a decision to be made afresh after consultation and a fair notification period set down. We are also not asking that the ZEP be continued in perpetuity but for fair process,” says Fritz.

The foundation slammed the decision as being made in haste and ill conceived. Fritz points out that the bungled decision saw the minister initially make an announcement in November 2021 to terminate the ZEP, then having to announce a “grace period” of 12 months, but also issuing a directive in January 2022 for banks and other service providers to withhold services to ZEP holders if that person was unable to produce a receipt that they had applied for another visa. The directive was so “ludicrous” given the time frame over the December holidays, Fritz says, that the minister was forced to withdraw it.

Fritz says that, ironically, the ZEP was a “carefully crafted policy” in the wake of post-election violence in Zimbabwe in 2007-2008 as desperate Zimbabweans streamed to South Africa. It was a policy designed with South Africa’s interests in mind, she says. It was meant to reduce the burden on the asylum reception system; to scrap the costs of policing and deportation; and to be able to track and record people coming into the country.

“This policy has not been revoked; there is no new white paper or any kind of new policy. So in the absence of any kind of clear new policy that underpins this decision to terminate the ZEP, one is left to speculate that what is driving this kind of a response is the worst kind of anti-foreigner, xenophobic sentiments.”

Fritz says the foundation will be asking for an expedited hearing in the Pretoria High Court, given that there are only six months left before the December deadline. There are also several other legal challenges against the minister’s decision to terminate the ZEP, and all the challenges may be consolidated and heard together.

Ngqabutho Mabhena of the Africa Diaspora Forum has welcomed the Helen Suzman Foundation court case as a stand against what Mabhena says is “narrowing nationalism and populism in South Africa”.

Mabhena, a Zimbabwean who has lived in South Africa since 1997, says: “Migration is being used as a key electoral question. It played itself out in the local government elections, particularly in Johannesburg, where the parties that were campaigning on this ticket did win some few seats.

“We believe the ANC is also feeling the pressure so it’s taking a right-wing position like other populists because it is scared it might lose the 2024 elections.”

He adds that angry South Africans who are part of the poor competing for scarce resources should recognise that their fight should be against governments across the continent — South Africa included — that have failed to improve the lives of its people.

“Migrants are victims of their own government, they should not be attacking the victims, but the governments that have collapsed their economies,” he says.

Kopanang Africa Against Xenophobia is also raising alarms about the ruling party’s tip toward anti-foreigner sentiments as a populist political tactic.

Dale McKinley, the spokesperson of the group, says: “We’ve been warning that the issue of xenophobia is not driven just by a few individuals or a couple of organisations, but is something very deep-seated.

“What we’re seeing now is that this is being taken to another level, because the ANC has come on board and mainstreamed xenophobia.”

McKinley says the legal challenge by the Helen Suzman Foundation is important to ensure that proper processes, in line with the Constitution, are followed, not necessarily a challenge to have the ZEP endlessly extended.

“It’s unacceptable to have a situation where almost 200,000 people and all of their families are going to be thrown into complete desperation without the chance of having the opportunity to find other options in terms of permits or ways of staying.

“It has to be a process about humanity, dignity and respect,” he says.  DM/MC