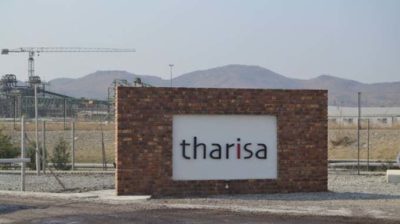 LONDON (Reuters) – Platinum group metals miner Tharisa is expanding into Zimbabwe with a drilling programme that could deliver results early next year and develop the company’s exposure to battery minerals, its chief executive said on Wednesday.

Tharisa is established in the Bushveld region of South Africa, where it is also investing in increasing platinum and chrome output, as it bets on continued consumption, despite expectations of reduced auto-sector demand.

A major use for platinum and palladium is in reducing emissions from gasoline and diesel vehicles. The platinum industry also has its sights on the need for platinum in hydrogen fuel cells, especially for industrial trucks in remote places.

“The world’s parking lots are still dominated by internal combustion engines and will be for some time,” CEO Phoevos Pouroulis said in an interview.

Tharisa is nevertheless looking to diversify its chrome and platinum group metals portfolio with minerals likely to be in deficit in future.

Expansion into the Great Dyke area of Zimbabwe, which is considered to have comparable resources to South Africa’s Bushveld region, can help.

Tharisa has exposure to Zimbabwe through its stake in the Pouroulis family’s Cyprus-based Karo Resources.

Pouroulis said the company had approval for drilling and could probably deliver initial results early next year.

“On the ground, things are efficient and effective and we are pleasantly surprised,” he said, when asked about political instability in Zimbabwe.

In South Africa, redesign of the open pit and investment in equipment have eaten into first-half earnings, but the company said full-year output is on track, as is an expansion plan.

Tharisa’s platinum group metals output in the first half fell 12.2% compared with the same time a year earlier and chrome concentrate was down 16.2%, it said on Wednesday.

However, Tharisa generated free cash flow of $17.1 million and its interim dividend represented a 16% payout ratio.

That demonstrated “the robustness of the business”, Pouroulis said. “We were running at suboptimal levels and we still generated cash.”

Analysts agreed and the share price rose around 1 percent by 0835 GMT.

BMO Capital Markets in a note reiterated its “outperform” rating and said it expected a stronger second half.