The agony of Cyclone Idai victims living with their dead

Source: The agony of Cyclone Idai victims living with their dead – The Standard April 14, 2019 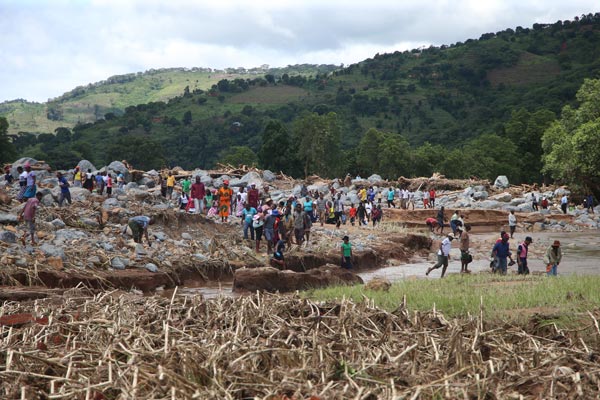 news in depth with Moses Mugunyeki

Sarah Sithole says it will take time for her to recover from the heart-wrenching experience of Cyclone Idai wreaking havoc in Chimanimani’s Ngangu township that claimed the lives of several of her friends and relatives while others were injured.

Sithole, a single mother of one, saw her friends being washed away and killed by the heavy rains induced by Cyclone Idai.

She said the only way to heal the emotional wounds created by the March 16 disaster was to leave Ngangu. Cyclone Idai swept through Mozambique, Malawi and Zimbabwe last month, leaving extensive damage in its wake.

Chipinge and Chimanimani districts in Manicaland province were the most affected with over 344 people confirmed dead so far.

Hundreds remain missing, many of them buried under the rubble in flattened settlements like Ngangu.

“What I saw on that night is disturbing and the moment I try to share with you those experiences, it affects me so much,” Sithole said.

“How can we live alongside the dead bodies of our relatives and friends buried under those rocks?

“Do you think we will forget about Cyclone Idai when we walk on top of the rocks knowing that a friend of mine is buried there?

“The only way I can recover from this is to leave this place for good.

“A friend of mine and her two children died. Her body and that of one of her child were found, but the other one is missing.”

Twenty-two-year-old Tymon Dhliwayo said he was among the survivors who searched for dead bodies after the rains had stopped.

“It was not for the faint-hearted. We had no choice, but to search for people that were missing. Some were found under rocks, in between tree branches and for others, we could find their body parts only,” Dhliwayo said.

“We carried the dead bodies to the school, which was the only safe place on the day.

“The traumatic experiences of that particular week haunt me day and night and it will take time for me to recover.”

Both Sithole and Dhliwayo believe the emotional wounds of Cyclone Idai can heal if people are relocated elsewhere.

A sombre atmosphere is still prevailing in Ngangu, which before the cyclone was a hub of activity, especially at night.

A visit to the area last Tuesday night showed that all was not well in the area. The area had been without electricity since March 16, which exacerbated the situation.

“You came at the wrong time when people are mourning. If you had come before the cyclone, you would have seen that people here enjoy themselves,” said one of the revellers at a beer outlet that was operational that night.

“This is the only place that has power because they use a generator. These guys are making money from charging people’s cellphones. It’s a ‘dark city’, my brother.”

One of the few ladies of the night at the drinking spot, who preferred to be called Nokuthula, said business was low.

“Morale is at its lowest ebb here and our business has been affected big time,” she said.

“However, we are only targeting you guys from outside because our local guys are not in that mood.”

Nokuthula said most of her friends had relocated to other towns, while several families in the area were mulling leaving Ngangu.

“Most of my friends have left this place for other towns where they feel safe as they try to recover from the traumatic cyclone experiences. A number of families no longer want to stay in Ngangu and they want to leave this place,” she said.

Civil Protection Unit Manicaland chairperson Edgar Seenza told a delegation of permanent secretaries led by the chief secretary to the president and Cabinet Misheck Sibanda, who were on a tour of affected areas in the province, that government was working on relocating survivors of Cyclone Idai in Ngangu to Nhuka Farm.

“The hotspots were Ngangu, Rusitu [Kopa] and Machongwe where several homes were destroyed,” he said.

“We are happy with the support that we are receiving from government and several partners.

“However, a lot of work still needs to be done in terms of infrastructure rebuilding.

“A lot of people are still missing, and there is also need to assist the survivors cope with the disaster.”

“I am here to be part of those mourning their departed loved ones,” he said.

“I could have had a show in Chipinge over the weekend, but I had to suspend it so that I join you as we try to recover from the cyclone.”

Tadiwanashe Mutume, a Form Two student at Charles Lwanga High School, said most pupils, particularly boarders, were no longer coming back to the school after two pupils died when a boulder from a nearby mountain hit the dining hall before it collapsed onto a dormitory.

“The events on the day were disquieting. Two pupils and a guard died within the school premises and most of the boarders said they were no longer coming back,” she said.

“We fear that we might have an outbreak of cholera or other waterborne diseases after most toilets in the area collapsed while boreholes were destroyed by the heavy rains,” said Mapahla.

“We are appealing for help to rebuild infrastructure.”

“We are happy so far with what is happening in terms of relief aid distribution,” she said.

“It is being conducted fairly, but from what we gathered, survivors need some kind of emotional healing.

“There is need to provide psychosocial support in the affected communities.”