The fate of livelihoods under Covid-19 lockdown measures

Source: The fate of livelihoods under Covid-19 lockdown measures – The Zimbabwe Independent 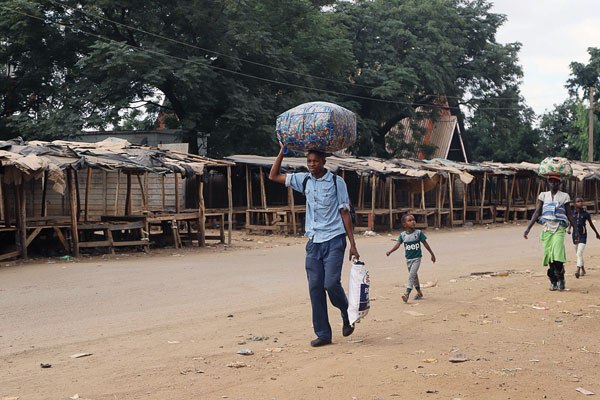 ZIMBABWE like the rest of the world had to contend with the effects of Covid-19 for most of 2020. Beginning in March 2020, the country imposed a number of lockdown measures which among other things curtailed not only the spread of the virus but also economic activity.

When government began to lift restrictions, it did not extend these measures to what we generally refer to as the informal sector. This is despite the fact that the majority of the people are eking out an existence on the margins of the formal economy. Zimbabwe has been shedding more formal sector jobs than it creates every year.

In our survey across 10 provinces, we found that 42% are employed in the informal sector whilst another 10% combines informal and formal sector activities.

The lockdown did not however slow down government’s penchant for changing laws. In one year alone the Government passed 314 Statutory Instruments. Some of these laws served to restrict the movement of people due to the lockdown. Perhaps one of the most important policy measures was the Global Compensation Agreement wherein government committed itself to paying US$3,5 billion to former large scale commercial farmers.

It is important to bear in mind that the livelihoods crisis under discussion has a longer history than widely acknowledged. The crisis is a result of a combination of, on one hand a failure to rehabilitate and align with the rules of the global financial and aid system, a new fascination with neo-liberal reforms without political reforms, endemic corruption within government and on the other hand exogenous factors such as the impact of drought on agriculture and food security, flooding caused by Idai and more recently Covid-19.

A turn to the right

The government of Zimbabwe has since 2018 been engaged in a process of neo-liberal restructuring under the banner of ‘Zimbabwe is Open for Business’. The measures that have been implemented to date are synonymous with the structural adjustment programme of the 1990s. Unlike under Robert Mugabe, the new government has pinned its hopes on attracting foreign direct investment and, in the process, joined the rest of Africa in what is commonly referred to as the ‘race to the bottom’.

The Covid-19 pandemic imposed new challenges on the economy. The informal sector was the worst hit. Government’s lockdowns starting in March effectively closed down informal markets. Formal business also struggled to retain their employment capacities leading to a number of firms cutting down the size of their work force. According to a study carried out by Chaora (2020), 32% of small and medium enterprises (SMEs) that responded to the survey indicated that they shut down operations completely and adopted a wait and see approach. Forty-one percent (41%) closed the physical office and continued to work remotely. Only 35% of respondents remained operational in their office space during the lockdown. Of those who continued to operate 20% indicated they had essential staff only with strict measures in place for social distancing and maintained high standards of hygiene. Furthermore, the majority (95%) of the respondents indicated that the lockdown had negatively affected their finances and prospects for long term viability.

When measured by incomes, own production capacities and remittance support, there is sufficient evidence to suggest that livelihoods deteriorated throughout 2020. Social protection measures such as price controls were removed.

Unlike in 2008 where shops were literally empty, this time around the shops remained full but real demand was suppressed. Earnings and savings were eroded by the shift from the official 1:1 parity between the United States dollar (USD) and the Real Time Gross Settlement (RTGS) dollar. The prices of basic goods moved in alignment with the parallel exchange rate.

In other words, the cost of living in Zimbabwe increased by 279,66% within a space of six months. Fast forward to December 2020, the majority of respondents still earn below US$200, equating to ZW$$17 000. These figures suggest that there has been no significant shift in terms of earning capacities in comparison with the shift in prices. Whilst the cost of living for a family of five has increased by 254,27% from January 2020 to December 2020, salaries have not increased to match this and in some instances have remained stagnant.

Food insecurity has worsened. According to the Zimbabwe Vulnerability Assessment Committee (ZIMVAC)’s rural livelihoods assessment, the number of food insecure households normally peaks between January and March of each year and 2020 was no exception. The Covid-19 pandemic also imposed new threats in an already critical food security situation arising mainly from the prevailing poor macroeconomic conditions.

ZimVAC estimates that about 56,2% or around 5,5 million rural people will be food insecure at the peak of the hunger season from January to March 2021.

It is expected that the 2020 food insecurity will spill over into 2021. ZimVAC estimates that about 56,2% or around 5,5 million rural people will be food insecure at the peak of the hunger season from January to March 2021. This prevalence of food insecurity is one of the highest the country has recorded in the recent past and the data suggests the need for continued support to households to avoid slipping into chronic food insecurity and malnutrition. Subsistence farming families who make up three-quarters of Zimbabwe’s population and produce most of its food have been the most affected.

Livelihoods are usually discussed in isolation from government’s (central and local) policies. The capacity to generate and maintain livelihoods is always either negatively or positively affected by the policy regime in place. Policies with a direct impact on livelihoods range from those purely focused on the economy to those that seek to improve social service delivery.

Despite the direct relationship between policies and livelihoods there are very few instances where those affected by policies are actually engaged at the design level of policy. Our data from field surveys already shows that only 39,82% citizens are engaged in policy consultations.

The lack of broad-based engagement in policy design has led to the formulation of inadequate solutions which do not optimally respond to the challenges on ground. A government focused on strengthening livelihoods should ideally invest time and other resources to adequately consult broadly before coming up with policies or a long-term strategy.

According to findings from our national survey citizens would like the national government to prioritise the following: stabilising prices (62,93%), dealing with corruption (51,28%), fixing cash shortages (41,06%), resuscitating industry (37,55%). Most of the issues raised by citizens are part of the day-today problems they face as they attempt to create or strengthen existing livelihood strategies.

What must be done?

There is increasing recognition that policies need to be coherently implemented over a reasonable amount of time without government changing its course. However, the government has developed a knack of changing policies either through Statutory Instruments or passing new guidelines.

Take for example the inconsistencies around currency of use. For the record, the currency crisis has characterised Zimbabwe since the collapse of the Zimbabwean dollar in the early 2000s and in the process severely affected the generation of long-term sustainable livelihoods.

The half-hearted measures implemented by government for instance the re-introduction of RTGS, bond coins and then bond notes served to create a parallel rate of exchange and undermined the capacity for long term planning and accumulation of savings.

In 2019 and 2020 alone, government shifted from its earlier position of the continued use of the multi-currency regime to a local currency and also recently reversed that to acceptance of the use of the USD. The shifts have affected many entrepreneurial ventures, pensions schemes and in some instances eroded the value of capital goods such as houses.

Usually, it is not necessarily the lack of policy direction but rather the lack of capacity and discipline to implement policy provisions. Over the decades the government has been unable to retain competent and experienced personnel.

Policies and strategies are usually high order documents which are the preserve of the senior bureaucrats but implementation of said policy depends on all officials at head office and also spread across the country. In some instances, policy measures are implemented unevenly.

Planning and working together with non-state parties (not just United Nations entities) but include local Non-Governmental Organisations (NGOs) and entrepreneurs; tapping into the philanthropy space, not only by the rich but also by communities could contribute towards strengthening livelihoods.

Cautious investment by the government in economic activities that have a bearing on broader and equitable consumption and accumulation i.e., small holder farmers, informal traders and micro, small and medium enterprises (MSMEs)/ social entrepreneurs and the creation of low-income housing funds can go a long way towards economic planning.

Murisa is a development practitioner. His research focuses on citizens’ agency & solidarity, philanthropy, public policy, land and agrarian reforms in Zimbabwe and across the continent. He was educated at the University of Zimbabwe (UZ), Leeds (UK) and Rhodes University. Tendai is the founder and Executive Director of SIVIO Institute.