The junta is scoring own goals 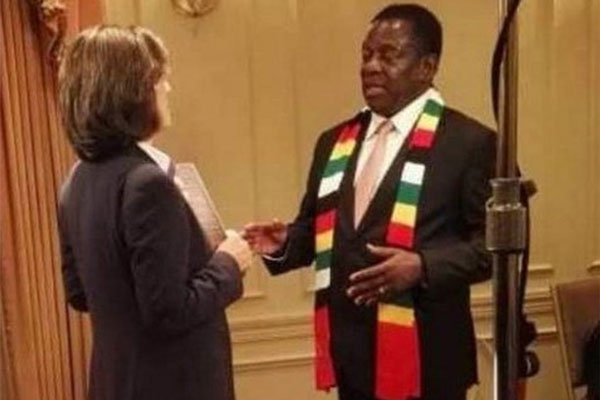 I am sure you have noticed just how serious the internal contradictions within the Junta have become.

On one hand, their spokesman, Lacoste is talking about re-engagement with the international community while the owners of the project are throwing the biggest spanners in the works.

Little wonder some “little nothing” publication was talking nonsense about an alleged president in Southern Africa who has been stripped of all executive powers after his employers, the Junta, felt all he has managed to do is popularise a silly dance routine using his hands while ordinary citizens suffer.

And when ordinary citizens suffer, that constitutes a threat to the continued stay of the Junta in power.

As an example, while the Junta talks about re-engaging the United States where real trade takes place, someone pulls a stinker and sponsors demonstrators to lay siege outside the US embassy.

While the Junta CEO and spokesman is busy trying to kickstart the economy into some kind of life, the real owner of the koundry is busy causing anzhayati in the business sector through works of chandayzement by calling businesspeople terrorists.

With two bodyguards standing behind him, (as opposed to Lacoste who is given one soldier to stand behind him) the leader leaves nobody in doubt as to who the boss is.

Even the winning entries at the show are a reflection of who is in charge.

To hell with such superpowers such as the USA!

If they are going to win, they will win small.

This is our own ZIT PFEE and we will show them who is in charge by not making Americans win anything.

Is it not better to make the ruling Zanu PF a winner as opposed to rewarding imperialists and slave traders?

After all, the party did well to romp to victory given some of the cadres who were deployed as candidates during the elections.

Following the visit to Belarus earlier, and given the kind hospitality which they showered us with, I think the judges at ZIT PFEE felt it in order that we
should show our appreciation by making them winners of some sort.

The new Botswana president really knows how to drive the knife through the heart.

After embarrassing us with his donations of fortified foods and medical sundries, he had the audacity to haunt us again by calling us country X as if we have
no name.

At a meeting attended by a Zimbabwean businessman, the young president though did well by exposing everything that has gone wrong with Zimbabwe.

He mentioned paying investors in a currency of their choice.

That is a subject quite close to many tobacco farmers.

After breaking their backs in the fields and tobacco barns, they are now realising that they have been deped.

The only problem with that is there may be no tobacco farmers to rip off as they will still be counting their losses.

What else is going up?

The Junta must be getting worried. With all these price increases, one wonders what their campaign messages will be come 2023.

Lacoste triggered all the hardships by announcing huge fuel price increases before fleeing to Eurasia.

Now thanks to him everything has gone up.

From bread, to nedicines amid hints that even tollgate fees will go up, meaning costs of travelling will increase further.

Do these people care for ordinary Zimbabweans? Their stay in office can be described in one word.
Failure!

Then there is one gentleman called Edward Graham Cross.

He has been saying a lot of interesting things like how G40 is buying weapons of war.

This Eddie chap, one wonders what exactly is going on. Only time will tell.

So, according to the media, Nero and G40 had come up with a strategy to return Gushungo one way or the other?