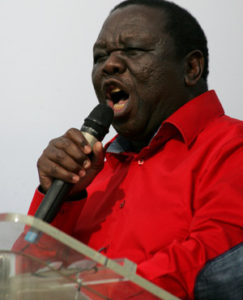 By now, we think we have accepted that it is not enough for the president we all hope for is “anyone but Mugabe”, but have we followed through on that?

What turned the war hero of 1980 with a string of degrees, an air of austere dedication and a mouth full of fine words about reconciliation, into the monster we were glad to see go in 2017?

The simple answer is “We did”, with a little help fom the men in black suits and dark glasses who surrounded him.

We wanted a revolutionary hero to outshine Nkrumah, Nyerere, Lumumba, Gadafi and Che Guevara, so we invented one.

Robert Mugabe had the first qualification; a ten-year stretch in prison. He gained our sympathy when his jailers would not let him go to the funeral of his only son. He gained our support when he made uncompromising militant speeches, in Harare on his release from prison and then from exile. His dash to freedom in Mozambique added to his hero status. We regarded him as a statesman when he made his reconciliation speech on his return to Zimbabwe. We were going to get the changes we had suffered for and that so many had died for, but he was going to be magnanimous towards the defeated. Little did we know! But we wanted to hope.

We may have felt some doubts when our revolutionary leader, unlike Sankara or Castro, always travelled in a bulletproof limousine surrounded by armed soldiers and police; these doubts may have been voiced when people were shot for ignoring the signs warning of a nightly curfew outside State House, but we told ourselves that, with the villains of apartheid South Africa on our border, he needed “security” even if it cut him off from us.

And cut off he was. There were one or two apparently South African attempts on his life in his first year as Prime Minister, but not the 13 attempts which his minders told him had been foiled. (Somebody was trying to isolate him there.) “Security” was tightened so that no voice he didn’t want to hear would be heard in his presence. The same applied to the written word.

How far did he collude in this deception? Did he see beyond the nice new hand-pumped boreholes of all his neighbours at Kutama and the way Ardbennie Road and Pazarangu Avenue were specially cleaned, painted and repaired for State funerals? Was he being fooled or did he agree to it? We may never know.

But the result was, between the security details, the praise singers and his supporters who chorussed “Surely HE doesn’t know about this?” whenever we heard of emerging corruption or “disappearances” of inconvenient people, that be became isolated. In plain language, he lost touch with reality. And we were at least partly responsible.

But have learned anything from all this? Can we honestly say that the “cult of personality” is dead? Don’t we hear otherwise reasonable people praising their chosen candidate to the skies and demanding that party members all give him (or her) unswerving loyalty? Has nobody realised that echoing King Canute’s courtiers who told him he could command the tide of the sea to turn back, is undermining their hero, not building him (or her) up? This is not limited to one party, or to “heroes” of one gender.

Do we really want to be led blindly by an all-powerful, all-knowing leader? That reminds me of the saying about the blind leading the blind; by isolating him (or her) we make him (or her) blind and then we choose to be blind followers of this blind leader.

We were fortunate that Morgan Tsvangirai was more resistant to that temptation than most of the present crop of presidential hopefuls. His death was a loss for all of us; he had his failings, but he remained a simple man, “unfit” as his detractors said, in his suit that sometimes looked as if he slept in it, to line up for a photo with dapper English gentlemen like Robert Mugabe and Thabo Mbeki?

Yes, he may not have been his earlier self in his last illness, but where will we find his like again? We need a man (or woman) like that.