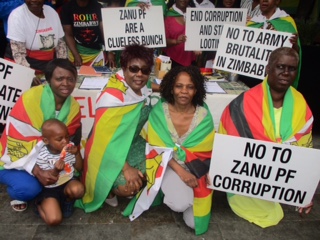 Zanu PF popped the champagne to celebrate Zimbabwe’s promotion by the World Bank from a lower income country to a lower middle economy. Apparently we now have an average annual income of $1,790.

The champagne went flat when it dawned on people that the World Bank might be assuming that we were all soon to be millionaires like in the days of the last Zim dollar. Or, more likely, the World Bank was not factoring in the vast disparity in income between the Zanu PF elite and the ordinary people living on an income far less that $1,790.

This ‘private opulence and public squalor’ was illustrated in the boastful display of wealth by Zanu PF MP Justice Mayor Wadyajena, who reportedly paid $420,000 for a Lamborghini, which he presumably is stupid enough to use on the pot-holed roads of Zimbabwe.

Anyway, it was business as normal for Finance Minister Ncube and Central Bank governor Mangudya who flew off to China in the hope of getting a financial bailout to ease the liquidity crisis, no doubt assuring the Chinese that we would soon start clearing our long overdue debts to them.

The problem is that the Chinese are not amused by the difficulties experienced by one of its investors in Zimbabwe, Sunny Yi Feng Tiles which has ploughed $50 million into its Norton factory which exports 70% of its tiles to SADC countries. The company says it has decided to abandon plans to expand because of persistent harassment and demands for bribes by politicians and government officials. It had been thinking of investing $1.2 billion in Zimbabwe but might now look to Zambia, Angola or Mozambique.

The new Chair of the Zimbabwe Anti-Corruption Commission, Loice Matanda-Moyo, says unbridled corruption is a major cause of the country’s economic crisis. She said she wanted the commission to deal with high profile members of society who had been putting up resistance.

The Vigil wishes Ms Matanda-Moyo luck. Apart from the big players, she won’t have far to look for corruption cases, given the suspension of the Masvingo Provincial Hospital Superintendent and his entire management committee in a scandal over the alleged direction of critical drugs to private pharmacies for resale in foreign currency (see: http://www.newsdzezimbabwe.co.uk/2019/07/entire-hosp-management-suspended-over.html).