‘There is death all over’: Cyclone Idai toll rises above 300

Source: ‘There is death all over’: Cyclone Idai toll rises above 300 – Associated Press 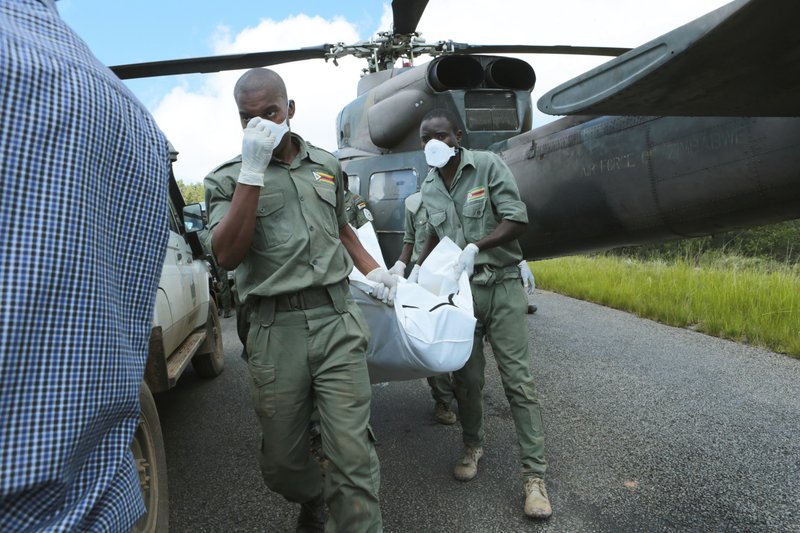 Rescuers carry a body from a military helicopter in Chimanimani, about 600 km south east of Harare, Zimbabwe, Wednesday, March, 20, 2019. Zimbabwean President Emmerson Mnangagwa visited a part of Chimanimnani affected by cyclone Idai and promised assistance in the form of food and rebuilding of homes. Hundreds are dead, many more missing and thousands at risk from massive flooding in Mozambique, Malawi and Zimbabwe caused by Cyclone Idai. (AP Photo/Tsvangirayi Mukwazhi)

CHIMANIMANI, Zimbabwe (AP) — Mozambique began three days of national mourning on Wednesday for more than 200 victims of Cyclone Idai, while the death toll in neighboring Zimbabwe rose to more than 100 from one of the most destructive storms to strike southern Africa in decades.

Torrential rains were expected to continue into Thursday and floodwaters were still rising, according to aid groups trying to get food, water and clothing to desperate survivors. It will be days before Mozambique’s inundated plains drain toward the Indian Ocean and even longer before the full scale of the devastation is known.

People have been clinging to trees and huddling on rooftops since the cyclone roared in over the weekend, and aid groups were desperately trying to rescue as many as they can. The United Nations humanitarian office said the town of Buzi, with some 200,000 people, was at risk of becoming at least partially submerged.

“Floodwaters are predicted to rise significantly in the coming days and 350,000 people are at risk,” the U.N. office said.

Zimbabwean President Emmerson Mnangagwa received a somber welcome in the hard-hit mountain community of Chimanimani near the border with Mozambique. Zimbabwean officials have said some 350 people may have died.

“We do not want to hear that anyone has died of hunger,” Mnangagwa said.

Clutching a bag of his few remaining possessions, Amos Makunduwa described the devastation with one stark sentence. “There is death all over,” he said.

“It is beginning to smell really bad,” he added. “The whole area is like one big body of water, huge rocks and mud. There are no houses, as if no one ever stayed here.”

The force of the flood waters swept some victims from Zimbabwe down the mountainside into Mozambique, officials said. “Some of the peasants in Mozambique were calling some of our people to say, ‘We see bodies, we believe those bodies are coming from Zimbabwe,’” said a local government minister, July Moyo.

Entire villages were swept away, said Gen. Joe Muzvidziwa, who was leading the military’s rescue efforts in Zimbabwe. Some people had been out at beer halls when the cyclone hit and came home to find nothing left.

Mozambique’s President Filipe Nyusi said late Tuesday that more than 200 people were confirmed dead in his country. After flying over the affected region on Monday, he said he expected the death toll to be more than 1,000.

Aid workers were shocked as they arrived in the Mozambique port city of Beira, estimated to be 90 percent destroyed. The 500,000 residents of the city, which has some neighborhoods that are below sea level, were scrambling for food, fuel and medicine.

In footage shot by South African broadcaster eNCA, food and other supplies were dropped from a helicopter to a survivor standing waist-deep in water outside Beira. Another man clinging to a tree branch was hoisted to safety. Rescuers cradled small children, keeping them warm.

“Everyone is doubling, tripling, quadrupling whatever they were planning” in terms of aid, said Caroline Haga of the Red Cross in Beira. “It’s much larger than anyone could ever anticipate.”

The chairman of the African Union Commission said it would provide $350,000 in immediate support to the countries, and the United Nations allocated $20 million.

The European Union released $3.9 million in emergency aid, and Britain pledged up to $7.9 million. Tanzania’s military has sent 238 tons of food and medicine, and three Indian naval ships have been diverted to Beira to help with evacuations and other efforts.

Sacha Myers of the nonprofit Save the Children described overflowing rivers and dams, and said getting in aid was difficult, with roads and bridges washed away or submerged in the region.

Hunger and illness were growing concerns, with crops destroyed and waterborne diseases likely to spread.

“There are large areas where people are really finding it difficult to find sources of clean water,” said Gert Verdonck, the emergency coordinator for Doctors Without Borders in Beira.

“On top of all of that, there’s the issue of how to treat people who fall sick, with so many health centers damaged or destroyed.”