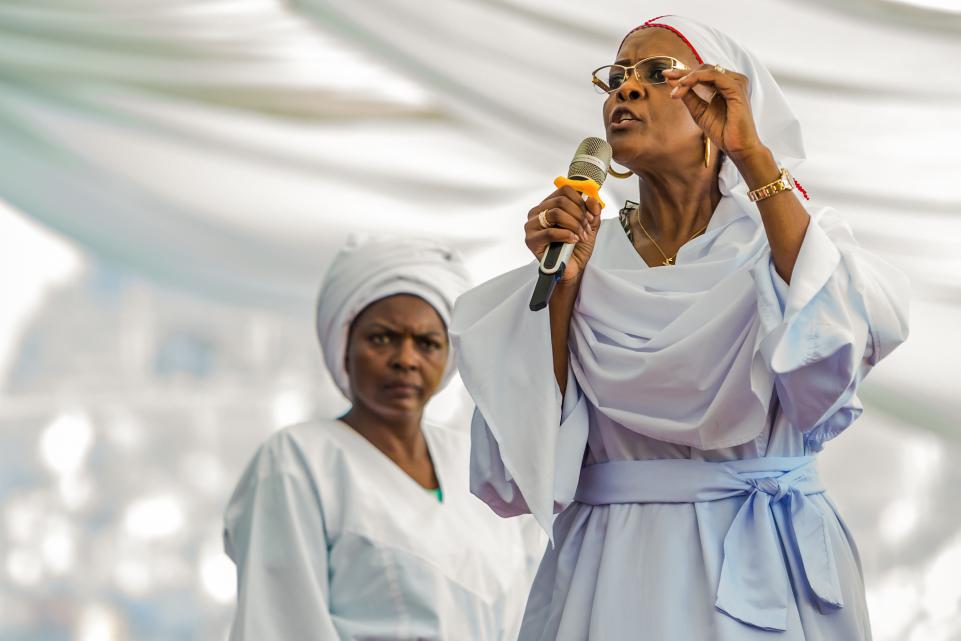 President Mugabe just fired his deputy, leaving the path clear for his wife to succeed him.

Source: There’s a Power Struggle in Zimbabwe and Grace Mugabe is Set to Come Out On Top

Robert Mugabe has been in charge of Zimbabwe for almost four decades and when the 93-year-old president finally steps down or dies, it looks likely that another Mugabe could make a play to succeed him.

The president’s wife, Grace Mugabe, positioned herself as a leading successor to her husband over the weekend and took aim at her main rival for the post, Zimbabwe’s Vice-President Emmerson Mnangagwa.

On Monday, the jabs aimed by the first lady at her opponent bore fruit: President Mugabe sacked Mnangagwa for exhibiting traits of “disloyalty, disrespect and deceitfulness,” according to an announcement by Information Minister Simon Moyo, Reuters reported.

It had been common knowledge in Zimbabwe that the ruling ZANU-PF coalition had split into factions over who should follow Mugabe as president: the G40 faction backed the Grace Mugabe, while the Lacoste faction supported Mnangagwa. But the first lady ramped up the rhetoric against Mnangagwa on Sunday, accusing him of seeking to undermine the president and divide the party.

“The snake must be hit on the head. We must deal with the real snake behind the factions and discord in the party. We are going for the Congress as a united party,” she said at a Sunday event addressing church groups in Harare, the state-owned Herald newspaper reported. She called for all members of the Lacoste faction to be expelled from the party before its congress in December.

Grace Mugabe, 52, has been vocal in calling on her husband to name his preferred successor—and on Sunday, she made it clear that she’d be willing to step into the breach.

“I say to Mr. Mugabe you should…leave me to take over your post,” she said, according to AFP. “Have no fear. If you want to give me the job, give it to me freely.”

The vice-president’s removal was unsurprising given Grace’s comments and some made by the president himself on Saturday. Mugabe threatened to sack Mnangagwa after Grace Mugabe was booed at a rally in Bulawayo, Zimbabwe’s second city. President Mugabe said that he had heard that the booing was pre-organized and blamed supporters of the ex-vice-president for heckling his wife.

“I am getting insulted in the name of Mnangagwa daily. Did I make a mistake to appoint Mnangagwa as my deputy? If I made a mistake I can even drop him tomorrow,” said the president on Saturday. “If he wants to form hs party with his supporters, he can go ahead. We can’t have a party riddled with insulting each other daily.”

Mnangagwa’s departure has undoubtedly strengthened the position of Grace Mugabe, who has swiftly climbed the political pecking order since her marriage to the president in 1996. The relationship began as an extra-marital affair while Mugabe was married to his first wife, Sally Hayfron—who died in 1992—and while Grace Mugabe was a secretary in the president’s office.

Grace Mugabe has already been responsible for the ousting of one former vice-president. In 2014, the first lady led a vitriolic campaign directed at Joice Mujuru, Mugabe’s then-deputy, accusing Mujuru of plotting to kill Mugabe and seize the presidency. Mugabe expelled Mujuru from the party in December 2014, appointing Mnangagwa as her replacement.

Zimbabwe’s ex-vice president, Emmerson Mnangagwa, speaks during the funeral ceremony of Zimbabwean politician Peter Chanetsa at the National Heroes Acre in Harare, Zimbabwe, on January 7. Mnangagwa was sacked from his position on November 6.JEKESAI NJIKIZANA/AFP/GETTY

The first lady is also the head of the ZANU-PF women’s league, a powerful institution within the ruling party, and has been endorsed by the party’s youth league to replace Mnangagwa as vice-president.

But Grace Mugabe’s time at the president’s side has also been littered with controversy. She was recently accused of assault by a South African model, who claimed that the Zimbabwean matriarch beat her over the head with an extension cord after she came to meet one of the Mugabe sons at a Johannesburg hotel in August.

The row sparked a diplomatic incident—President Mugabe came to South Africa several days before a regional conference to smooth things over—but Grace Mugabe was eventually granted diplomatic immunity and later claimed that the model, Gabriella Engels, had actually attacker her with a knife and that she had acted in self-defense.

She has earned a reputation for having a taste for the finer things in life—the first lady is nicknamed Gucci Grace and widely reported to have spent £75,000 (now worth $98,000) on a single day of shopping in Paris in 2003. Her educational credentials have also been the subject of debate in Zimbabwe: Grace Mugabe was awarded a doctorate in September 2014 by the University of Zimbabwe, having only been enrolled at the institution for a matter of months.

The decision sparked outrage in Zimbabwe’s academic community and the president’s opponents often call her Dr. Grace in a sarcastic reference to the alleged educational indiscretion.

With Mnangagwa gone, Grace Mugabe’s path to the top in Zimbabwe seems even clearer. The southern African country—gripped by an economic crisis, high unemployment and civil discontent—goes to the polls in 2018. President Mugabe is set to run as ZANU-PF’s candidate. Should he win, he will have another five-year term that would take him to the age of 99. Were he to pass on before that term was completed, it now looks as though his wife may be ready to succeed him.