THIS IS NOT A MOMENT; IT’S A MOVEMENT. So read one of the placards in the on-going protests in the US over the death of George Floyd. Floyd is fast becoming another symbol like Rosa Parks who, in the 1960s, refused to give up her seat in a bus to a white person and sparked the Civil Rights Movement. 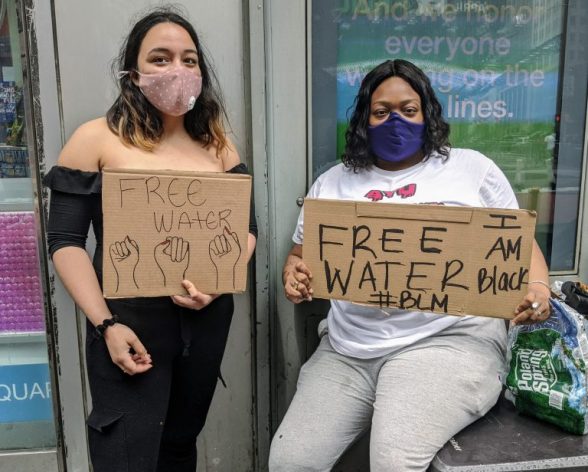 Zekiya Louis (R) and Manuela Ramirez (L) handing out free water to protesters in Times Square, New York during a protest over the death of George Floyd. Credit: James Reinl/IPS

There have been many black deaths at the hands of white police since but there is a consensus that this time it is different. The deeply felt indignity and insecurity that black Americans feel every day found, in this raw incident captured on camera, the spark that brought them, and many others in solidarity with them, out on the streets in cities all over the States and in countries around the world.

It happened in Minneapolis and it now seems possible that, starting in that city, the police all over America will be radically reformed to take into account the sentiments expressed so forcibly during these days of protest. Black Americans have found their voice in a new way and white Americans, and other people generally, have come out in solidarity with them. The time will come when we will stop talking about white and black and there will be just Americans; then the scar of slavery and superiority will finally be healed.

‘I have not come to abolish but to fulfil’.  Human beings have come up with all sorts of laws and customs to regulate society – some good, some bad. But the good laws have outlived the bad and keep pushing their way to the front. After the Second World War the United Nations came up with Universal Declaration of Human Rights on 10 December 1948 and the document was translated into 500 languages. It set out, for the first time, universal standards expressing the dignity and aspirations of all people.  It is an inspiring document but it needs fulfilment.  This is the hard bit. This is where we are now.

If we take the long view we can see the struggle of humanity from its earliest days of self-consciousness to improve how we relate to one another. We have made great progress! You do not have to be an historian to know this.  Even in Zimbabwe, despite all our present grievances, there is a freedom and respect for one another that was not there before independence in 1980. And, going further back, to the days of Lobengula, life was cheap and people could be slain for what today would be minor offences.

And so now modern technology, in the form of the an eight minute clip, has brought us to a new stage of growth and it feels different this time. ‘I am with you always’, says Jesus, ‘fulfilling, not destroying, all the work of men and women over the earth’.