Three activists say they were abducted by security forces after protesting. The government says they faked it, and put them in jail

The mood was somber as magistrate Bianca Makwande read her bail ruling to three members of Zimbabwe’s main opposition party.

Source: Three activists say they were abducted by security forces after protesting. The government says they faked it, and put them in jail – CNN 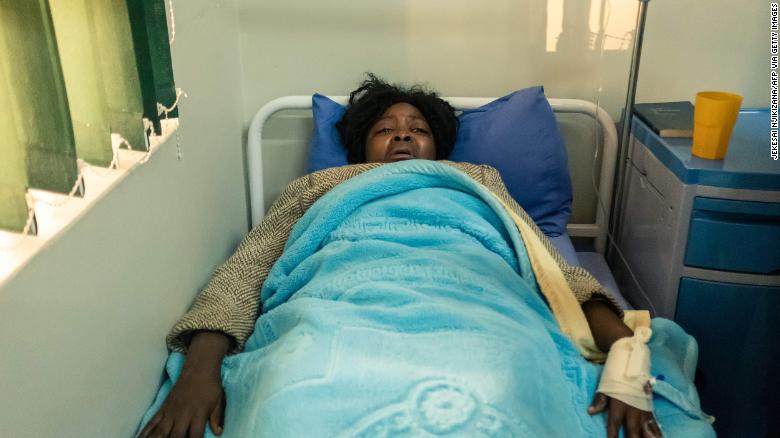 Cecilia Chimbiri lies on a hospital bed at a private hospital in Harare on May 15. She is one of the three youth leaders from the MDC Alliance who were admitted after allegedly being abducted and beaten up by police.

“The state says they faked their abduction, and that cannot be ignored,” Makwande said in court on Monday. “In that regard, bail is denied.”
The women’s family members, their Movement for Democratic Change Alliance supporters, their lawyers and human rights defenders, such as Amnesty International, were left shocked.
The trio — Cecilia Chimbiri, member of parliament Joana Mamombe and Netsai Marova — say they were abducted and sexually assaulted by unidentified government security agents after a protest last month in the capital Harare.
Zimbabwe’s government says no abduction took place and that the women’s claims are false.
After the women were released from what they say was their violent experience, state prosecutors visited the women in a private hospital where they were receiving treatment.
At the activists’ bedsides, the prosecutors charged them with breaking coronavirus lockdown regulations that forbid gathering for protests, before the trio was taken to a remand prison. Last week the state added a separate charge related to telling “falsehoods” against the state.
After being refused bail on Monday, the three women are now back behind bars and awaiting trial.
“It is highly likely that if convicted, they will be given a stiff custodial sentence which may induce them to skip bail,” Makwande said in her ruling.
Home Affairs Minister Kazembe Kazembe said in court last week that the state would offer evidence that the three opposition leaders worked with unnamed embassies and civic organizations to “fake abductions” after contravening the country’s coronavirus lockdown. 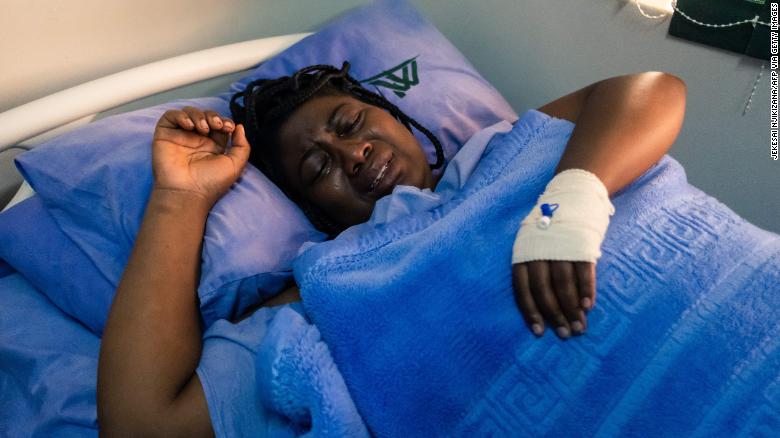 Joana Mamombe lies on a hospital bed at a private hospital in Harare on May 15.
Prosecutors presented still images from what they say is evidence that the women went shopping in Harare at the same time they claim they had been abducted. The prosecutors say they will provide the full video at the trio’s trial.
A government information official told CNN that it will not comment further on the case as it is now in court.
State-controlled media reported on June 14 that the women (and other opposition figures) have been working with foreign embassies to cause unrest in Zimbabwe.
The women’s supporters say the government’s ​charges ​are a clear sign that the tactics of Zimbabwe’s government have changed little since the ouster of the divisive longtime President Robert Mugabe.
“Be strong, I will be fine, mama,” 31-year-old Chimbiri told her mother as she was led out of the courtroom.
Appearing to be in physical pain and close to tears, the three wore matching prison garb of red and white sweaters, green dresses and face masks as they were ushered out by female prison officials. One of them, 25-year-old Marova, was using crutches to walk.
The three are now being held in a maximum security prison, the facility where dissidents are often taken when they are arrested.
The trio is due back in court on June 26, and will possibly get a trial date then if investigations by the state are finished, according to their lawyer, Alec Muchadehama of the Zimbabwe Lawyers for Human Rights group.
The women face a fine, or up to 20 years in prison if convicted.

The women were demonstrating on May 13 to have President Emmerson Mnangagwa’s government release grants to help citizens affected by Zimbabwe’s Covid-19 lockdown that began in late March.
Lawyer Jeremiah Bamu, who is part of the women’s legal team and also belongs to Zimbabwe Lawyers for Human Rights, said the women were stopped at a police roadblock after the demonstration, arrested and taken to Harare Central Police Station. It was there that they were abducted, said Bamu, but what happened next is unclear.
Zimbabwe Lawyers for Human Rights spokesman Kumbirai Mafunda told CNN that the women were arrested at a police check point in Harare and then abducted on May 13, before reappearing in the village on May 15.
Mafunda said that after the women were dumped in the village they were given cell phones by locals so they could call friends and relatives, who then arrived to take them to hospital.
Images of the women’s injuries — spread on social media by the women’s friends, relatives and supporters — and their story of abduction are disturbing.
The women said in court that their attackers were state security officials as they say they picked them up from a police station in Harare after their arrest for protesting, and drove them to an unknown location. There, they say they were asked to drink each other’s urine, before they passed out from a number of assaults.
“I thought they would have first investigated and prosecuted those who abducted and tortured me instead of rushing for us — the weak,” Chimbiri told CNN from her hospital bed on May 27. She appeared to be in a great deal of pain and said she could hardly move.
Chimbiri said she was stripped by the attackers and assaulted. She says she reported the incident to the police after she escaped her alleged abduction. According to the government, no one has been — or will be — arrested in connection with the incident as it believes the abduction was faked.
“This country is not for the opposition or anyone who has a different view to that of the government. I wanted my voice heard. But I was tortured in the process,” she said. “I have lost two teeth, the abductors put a gun in my rectum.
“They just rushed to prosecute us. Surely one day things will be fair in Zimbabwe,” she said.
Muchadehama, the women’s lawyer, said he is challenging his clients’ bail denial at the High Court and wants the charges dropped.
“Bail is a right in our constitution … So it is like they are already serving some sentence,” Muchadehama told CNN.
“All these charges are just meant to cover up for the abduction and torture the state committed,” he said.

Human rights groups and foreign diplomats have slammed the women’s treatment. In a statement Monday, Muleya Mwananyanda, Amnesty International’s deputy director for Southern Africa, said the continued “arbitrary detention” of the three “amounts to persecution through prosecution and is designed to send a chilling message to anyone daring to challenge the Zimbabwean authorities.”
Amnesty has called for their immediate release and for the alleged campaign of harassment of the trio to end.
“These women are victims of an escalating crackdown on the right to freedom of expression and criminalization of dissent. Instead of persecuting them, the Zimbabwean authorities should focus their efforts on holding those suspected to be responsible for their horrifying abduction, torture and sexual assault to account,” said Mwananyanda.
On Monday, the US Embassy in Harare tweeted the United Nations’ demand that the women’s charges should be dropped. “Instead, three victims of abduction, torture, and sexual violence are jailed while their captors remain free,” it said.

UN experts said Zim’s “Targeting peaceful dissidents…is a serious violation of human rights law” and recommended “The charges against the three women should be dropped.” Instead, 3 victims of abduction, torture, and sexual violence are jailed while their captors remain free. 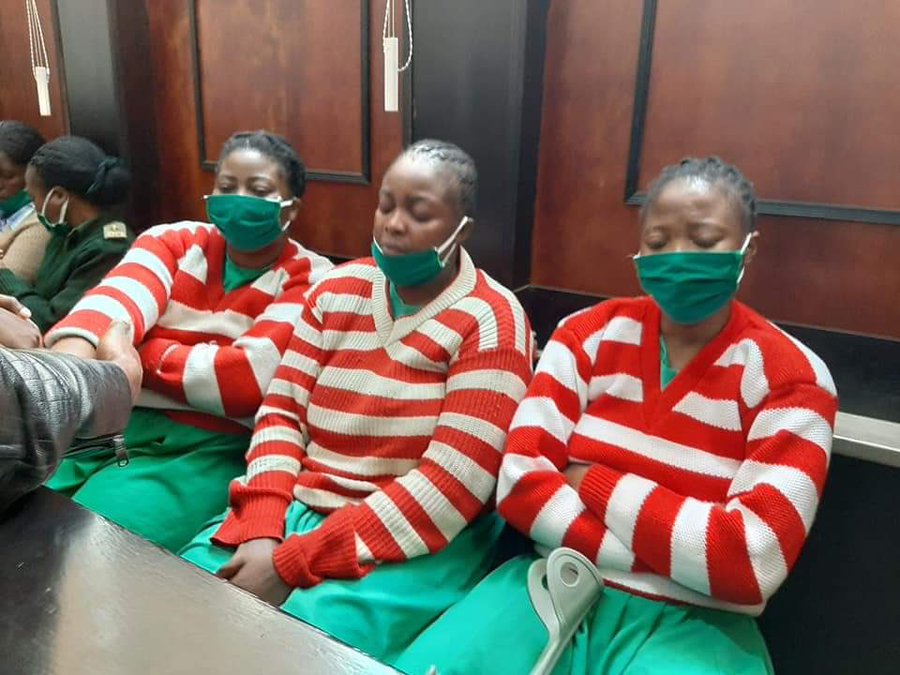 Last week, UN human rights experts demanded that Zimbabwe immediately stop “a reported pattern of disappearances and torture that appear aimed at suppressing protests and dissent,” and called for the charges in this case to be dropped.
“Targeting peaceful dissidents, including youth leaders, in direct retaliation for the exercise of their freedom of association, peaceful assembly and freedom of expression is a serious violation of human rights law,” the UN experts’ statement read.
Political analyst Alexander Rusero, a former senior international relations, politics and security studies lecturer at Harare Polytechnic, told CNN that Mnangagwa’s government can ill-afford the negative blowback given its need for foreign financial assistance to help an ailing economy.
Patricia Chimbiri, 52, watched helplessly, but angrily, as guards led away her daughter into a prison vehicle Monday.
“She may have asked me to be strong [while leaving the courtroom], but clearly she is not. She hasn’t healed from the torture. Instead of concentrating on treating their wounds and arresting their abductors, the government is busy persecuting my daughter and her fellow politicians,” she told CNN outside the court.
“Since their abduction on May 13, when they were abducted and subsequently charged, I have never had a peaceful sleep. I fear anything can be done to them. I feel tormented and it must be worse for her and her friends in the prison in this cold winter.”