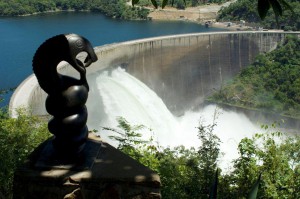 THE Zambezi River Authority (ZRA), which administers the Zambezi River and use of Kariba Dam on behalf of the governments of Zimbabwe and Zambia, has short-listed three contractors for the rehabilitation of the  dam’s spillway.

The $294 million project is meant to improve the dam’s stability and durability.
China Gezhouba Group Company Limited, CMC/ ATB Kariba Joint Venture and GE Hydro France have been shortlisted for the project, according to information obtained by The Financial Gazette.
The winner is expected to be announced in the last quarter of this year.

“The ZRA, on 21 March 2018, started the final lap of the spillway rehabilitation procurement with the launch of the works tender to a shortlist of pre-qualified companies. The procurement is expected to be completed in time for the works contract to be awarded by the last quarter of 2018,” said Munyaradzi Munodawafa, the chief executive officer of ZRA.

“Three pre-qualified companies have been invited to tender for the rehabilitation works.
“The rehabilitation will ensure the continued safe, controlled release of water from the reservoir when this is required. It will restore the Kariba Dam to full operability and ensure its continued contribution to energy security and economic growth, prosperity and poverty alleviation in the southern African region,” he said.

The spillway rehabilitation, which is jointly funded by the World Bank, African Development Bank and the Swedish government, entails the refurbishment of the upstream stop-beam guides and replacement of secondary concrete and the design, fabrication and installation of an emergency gate and a new gantry as additional safety precautions. The spillway consists of six gates through which ZRA releases water into the plunge pool to manage the reservoir water levels.

The project, which is expected to be completed by 2025, consists of two components ― rehabilitating the spillway and reshaping the plunge pool downstream to minimise scouring of the dam’s foundations.
The plunge pool, which acts as a shock absorber for the dam wall’s foundations and surrounding river banks, is said to be eroding towards the dam wall with the possibility of undercutting its foundation.
Left unrepaired, experts say, the erosion of the plunge pool would compromise the dam wall, with potentially disastrous effects on thousands of people living downstream.

The erosion had under-cut and destabilised the wall, putting the structure at high risk of collapse.
Apart from the economic losses arising from the destruction of the hydro power stations, the collapse of the Kariba Dam wall would create a regional humanitarian crisis due to flooding in Zimbabwe, Zambia, Malawi and Mozambique.

ZRA will provide $19,2 million while the African Development Bank and the European Union are expected to inject $75 million and $100 million respectively into the project.

The World Bank will provide $75 million while the Swedish government will inject $20 million.
About $80 million would be used for reshaping and stabilisijng the plunge pool, while the rest of the money would be used to rehabilitate the spillway’s upstream hydro-mechanical facility.

The dam, which has a height of 128 metres, was designed by French engineer and inventor Andre Coyne and was built between 1956 and 1958 by an Italian consortium, Impresit Group.