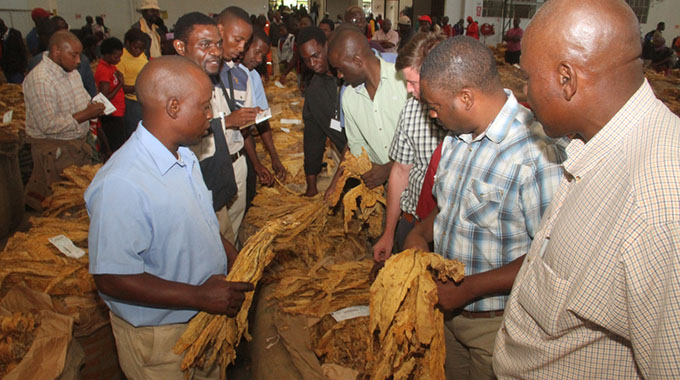 Livingstone Marufu
Tobacco farmers have grossed $398,4 million from 137,3 million kilogrammes that have been delivered 42 days into the 2018 marketing season, a gain of more than $50 million on revenues realised during the same period a year ago. During the same period in 2017, farmers earned $348,8 million after delivering 122,7 million kg.

According to Tobacco Industry and Marketing Board (TIMB) daily tobacco trade updates, of the $398,4 million earned so far, contracted farmers have pocketed $348,7 million after delivering 116,1 million kg, with the auction floors accounting for only $59,7 million after taking delivery of 21,2 million kg.

However, the tobacco export proceeds are $85 million shy of last year’s figures for the same period.
During last year’s comparative period, tobacco exports generated $205,2 million from a total of 42,6 million kg.
Tobacco is presently being exported at an average price of $4,43/kg compared to $4,81 (during) the same period last year.
Tobacco is Zimbabwe’s biggest foreign currency earner followed by gold.

Last year exports of the “golden leaf” topped $900 million, which was a marginal decrease from the $933 million posted the previous season.

Across the country, the area put under tobacco has slightly decreased from 110 518 hectares last year to 104 397ha.