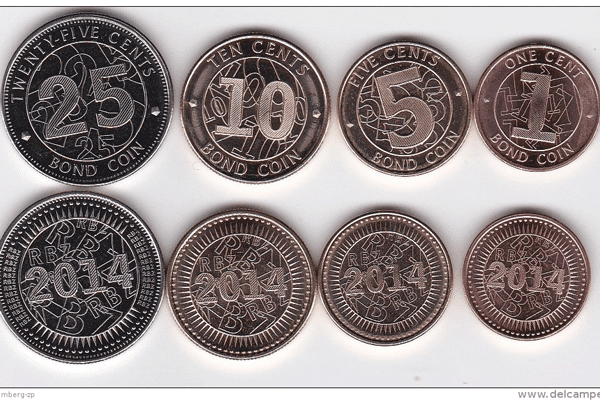 Weary commuters and citizens have urged government to act against informal businesses that are rejecting 50 cent bond coins, a situation that is now adding pressure on the cash crisis.

Informal traders and transport operators in Zimbabwe’s capital are not accepting the coins as legal tender weeks after the 25 cent coins faced the same fate, effectively taking them out of circulation.

The coins were at par with the US dollar when they were introduced in December 2014, but have become victims of the local currency’s loss of value since government scrapped multi-currencies in June this year.

The coins are also being rendered irrelevant by rising inflation which hit 440% in October.

A survey conducted by NewsDay Business in the suburb of Mbare, on Friday, confirmed that 50 cent coins were being rejected by traders.

A buyer at the Mbare Musika flea market, who identified herself as Mrs Moyana, voiced her frustration to the paper over the phenomenon.

“These people are taking advantage of the situation just to manipulate us and it is very unfair considering the fact that the cash-out outlets in the same area are giving us these coins. Right now, I cannot order my fruits because that is all the money I have,” she said.

“Even in the locations the same is happening. I just thought it would be different this side, but I was wrong. Government should do something about this because this is becoming too much.”

NewsDay Business noticed a vendor who was rejecting the 50 cent bond coins and asked him why he was doing that.

“We cannot take these coins because they no longer have value,” said the vendor, who asked for anonymity.

Last month, the Reserve Bank of Zimbabwe introduced new $2 and $5 dollar notes that would be used alongside the already circulating bond notes and coins.

The central bank made the move as the reintroduction of the local currency as the sole legal tender resulted in a significant shortage of hard cash.

As such, both Treasury and the central bank have not announced any plans to stop the use of existing bond notes and coins from being legal tender.

Vendors Initiative for Social and Economic Transformation director Samuel Wadzai said the 50 cent coins were no longer valuable despite acknowledging that the coins are still legal tender being issued by the central bank.
“It has to do with the quantity of the coins. These coins are now too many, yet, they do not have value. It becomes inconvenient to carry a bag of coins at the same time carrying goods. We are calling upon the authorities to introduce notes to replace the coins,” Wadzai said.

“I do realise that the coins are still legal tender. But, it is a plea that we are sending to the government to introduce notes so that we can trade conveniently.”

Apart from traders, kombi operators have also decided to shun the 50 cent coins at a time most of the commuting public rely on these vehicles.

He added that coins were also rejected when commuter omnibus operators buy spare parts, sellers opting for local notes and foreign currency instead.

“For us there is no policy of rejecting coins, but situations force us to do so. The major issue is on refuelling. Fuel stations are rejecting coins saying that it takes time to count them in a situation where there are long queues,” he said.

“Moreover, where we buy spare parts, they do not accept coins and it will be cheaper for you to buy spare parts with notes and United States dollars than coins, that is if they accept them.”

The rejection of the 50 cent coins come at a time the authorities are trying to promote the Zimbabwe dollar.