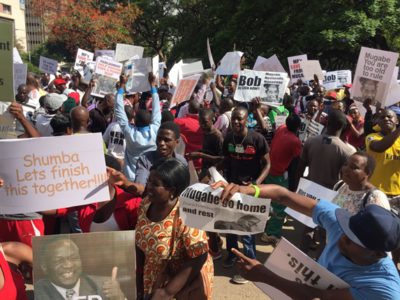 caption: Crowds outside Parliament in Harare

MDC leader Morgan Tsvangirai arrived outside parliament half an hour ago ahead of the impeachment vote.

His car was surrounded by a crowd of supporters who had been waiting outside parliament and across the road at Africa Unity Square where he is expected to address the crowd. He said the impeachment was a method to help kick out the veteran president Robert Mugabe. He said  people should make their voices heard that Mugabe should be ousted. “Zanu-PF’s culture, policies and tendency for violence must end. The liberation phase was one phase. The democratic phase was another phase. We are now finishing the agenda that the liberation fighters fought for.

He told the crowds waiting outside Parliament: “What you have started and what you doing is to show that the liberation of Zimbabwe was not an end in itself. Never again must we have a situation where the people must take up arms against the government.

“It is now time to put our heads together so that we can build a Zimbabwean that we can all respect and that we can all admire. It is my wish that everyone has a meal, that young people are employed,” he said.