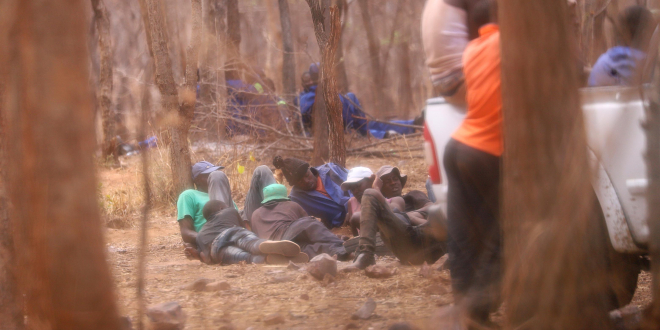 Reports coming from Maungwa’s Wickman 23 Mine yesterday said the Gorerino and Shantelle gang overpowered Maungwa’s workers and took over the mine and brought in an excavator to conduct mining operations on his claim.

They went on to destroy his truck which he uses to transport ore from the mine in full view of Zimbabwe Parks and Wildlife Management Authority (Zimparks) rangers.

Maungwa’s workers have been displaced and are reportedly hiding in the hills of the game park fearing for their lives.

In an interview yesterday, Maungwa confirmed the new development and said he has lost a lot of property and his gold ore to the gang.

“They have dispersed my mine workers, damaged my truck by defaulting its tyres and stole the gold ore. Right now there gang members are mining from my gold pits with their excavator and they also burnt down the entire mining infrastructure at the site. My boys are now hiding in the Hills fearing for their lives. Nine of them are seriously injured and seeking treatment,’ Maungwa said.

He said he has failed to find help from the police, Zimparks and other relevant authorities as they afraid to confront the gang members because of their political backing.

“Police went to the mine on Monday after I had made a report of assault against my workers and blocking of my trucks which were removing gold ore from the mine. This was after the High Court ruled in my favour instructing that I resume operations. However they refused to enforce the order or arrest the assailants even after being identified in their presence. I am being treated like this by the police yet I have court orders to show that I have been reinstated to mine and allowed to operate,” he said.

Contacted for comment yesterday, Mashonaland Central police spokesperson, Fedelis Zhewu yesterday confirmed that they have been some disturbances at the mine and police were still investigating.

“There’s something happening there, but the reports are not being done in earnest as there are reports and counter reports. We can’t be seen to be siding with one side but investigate and establish the truth. We are going to meet a team coming with the dispol and we that’s when we are going to get the true picture,” Zhewu said …….