Source: UN Calls For Increased Aid To Zimbabwe – The Organization for World Peace 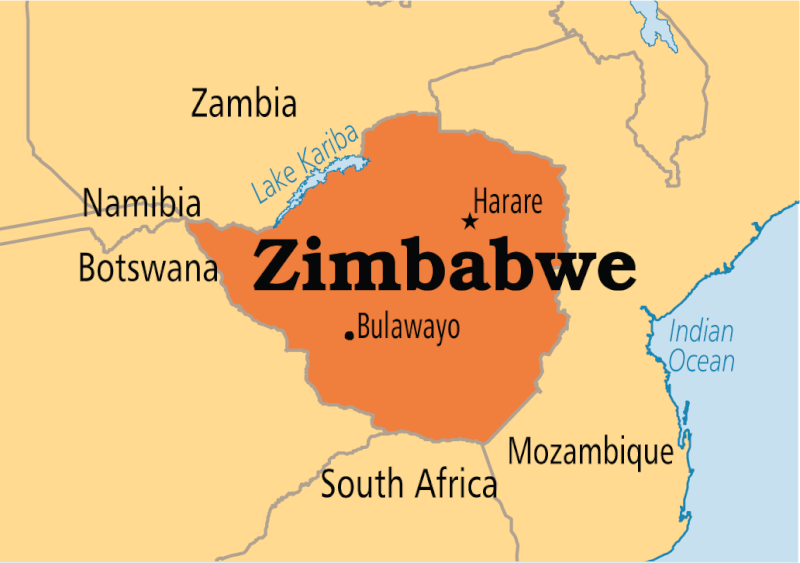 According to the United Nations (UN) World Food Programme (WFP), nearly 8 million people in Zimbabwe face food insecurity in the midst of extensive drought and an ongoing economic crisis in the country. The WFP now plans to increase the number of Zimbabweans it provides aid to, to 4.1 million, doubling the current number assisted. However, they need $293 million in the first half of the current year to provide 240,000 tonnes of aid. 2.2 million people in urban parts of Zimbabwe are at risk of starvation, along with 5.5 million in rural areas.

The WFP has warned that food supplies in the country will run out early in the year, without urgent assistance being provided. In 2019, like the two years before it, Zimbabwe experienced droughts which were worse than any in the past 40 years. Alongside these profound drought conditions, which are an issue throughout southern Africa, the country is also experiencing an economic downturn that is the worst in a decade. Some of the highest inflation rates in the world make food purchases increasingly unaffordable for an increasing number of Zimbabweans. The Zimbabwean dollar, first introduced in February 2019, lost 85 per cent of its value against the US dollar from February to December 2019. From a local perspective, such inflation means that bread costs 20 times what it did six months ago, and furthermore this means less meals, increasing debt, and children being forced out of school, among other consequences. This hyperinflation and rising food prices also mean that the WFP has switched from cash assistance in rural areas to direct food aid.

Niels Balzer, the WFP deputy director for Zimbabwe, said “As things stand, we will run out of food by end of February, coinciding with the peak of the hunger season — when needs are at their highest.” “Firm pledges are urgently needed as it can take up to three months for funding commitments to become food on people’s tables.” A spokesman for the southern Africa WFP operations, Gerald Bourke, said “Inflation is a rampant problem and people said, ‘We’d prefer the food.’” He also said “This is certainly the worst we are seeing in southern Africa.” Acute hunger has become an increasing issue in urban areas, beyond being prevalent in rural regions.

Zimbabwean President Emmerson Mnangagwa blames US economic sanctions placed on the country in 2003, during the long-time rule of the late former President Robert Mugabe. In October, Mnangagwa told supporters at a rally “The continued judgment setting of Utopian standards for Zimbabwe are callous, vindictive and should not be allowed to continue … enough is enough.” He has also said “I’m aware of the pain being experienced by the poor and the marginalized. Getting the economy working again from being dead will require time, patience, unity of purpose and perseverance.” It is evident that the situation in Zimbabwe is both ongoing and worsening. The different strands that contribute to the crisis call for multifaceted and consistent support from the international community that targets the most vulnerable in the country. The relatively slow acceleration of aid efforts to address the growing crisis indicates that there are various shortfalls in aid resources. Alongside international aid, there is a need for greater efficiency, transparency, and accountability in the government of Zimbabwe, so that it can appropriately assist Zimbabweans and stem further deterioration in trust towards the government. The lack of proper resource management and infrastructure maintenance, while the leadership in Zimbabwe has prospered from corruption, further contributes to a climate where many in the country are left struggling with their basic needs. Addressing these internal factors must accompany international aid efforts, to maximize the effect of efforts to support those severely impacted by the ongoing crisis.

While once known as the breadbasket of the African continent, hunger and starvation have become major problems in Zimbabwe, alongside the economic crisis that includes a 300 percent annual inflation rate. This inflation rate is the world’s highest, according to the International Monetary Fund (IMF). Maize meal, a dietary staple, doubled in price in November 2019, while even from early December to late December, prices of goods have increased significantly. The policy of dollarization, introduced in 2009, which allowed the US dollar and other foreign currencies to be used as legal tender, was dropped by Mnangagwa. The newly introduced Zimbabwean dollar dropped rapidly in value, leading to goods priced in that currency to dramatically increase in price. Exports from Zimbabwe have dropped, along with remittances from the diaspora, which have been an important source of US dollars.

Ursula Mueller, UN Deputy Emergency Relief Coordinator, tied the crisis in Zimbabwe to the climate crisis that has gripped southern Africa. In a telephone interview, she said “This is not just a food crisis. It is a wider more complicated situation.” Calling for investments to address the root causes of problems in Zimbabwe and other countries, she said “We need to move out of this cycle of dependency.” Ultimately, the ongoing economic and food crisis in Zimbabwe needs a concentrated and comprehensive approach so that the continuing harm that is on an increasing number of Zimbabweans can be minimized. In a country of about 14 million, knowing that over half the population faces food insecurity is a dire fact that requires urgent action. Inaction or insufficient action will allow the situation to further deteriorate, placing more people at risk and further deteriorating the fabric of Zimbabwe.