UN special rapporteur Alena Douhan is forced to change her one-sided itinerary on a propaganda trip to Zimbabwe. 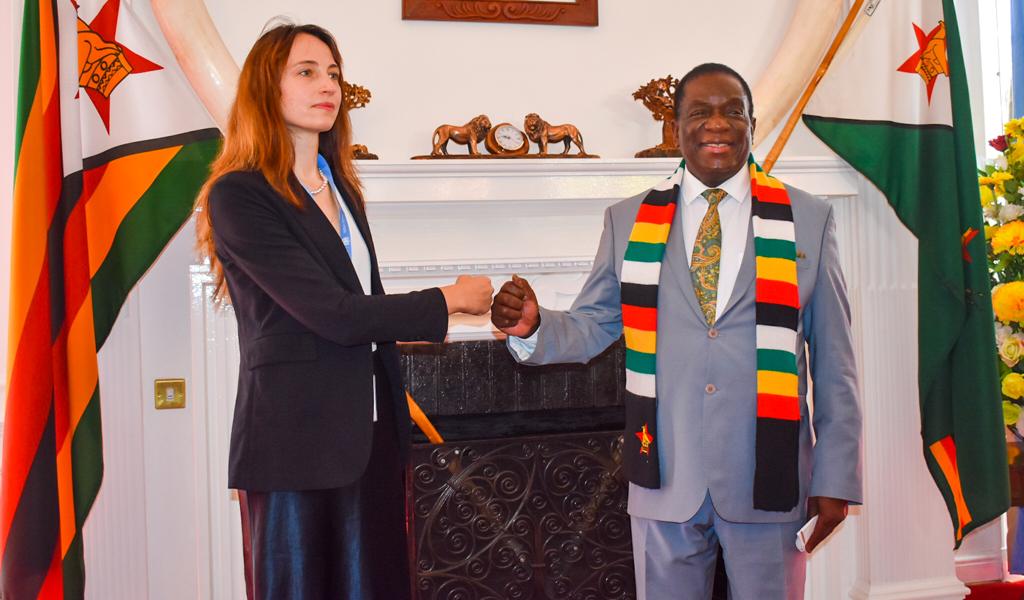 In wake of criticism for her one-sided itinerary designed to support the rights-abusing Zimbabwean regime’s efforts to remove international sanctions, UN envoy Alena Douhan was forced to change tack by inviting submissions from opposition voices during her visit to the country.

A Belarus academic, Douhan was appointed in March 2020 by the UN Human Rights Council as its second “Special Rapporteur on the negative impact of the unilateral coercive measures.” The Cuban-backed post was created in a 2014 resolution sponsored by Iran on behalf of the Non-Aligned Movement, and was designed to define Western sanctions against rogue regimes as violations of human rights.

Her first report to the UNHRC complained about Western sanctions that target the regimes of Iran, Syria, Venezuela and Cuba. Instead of calling out their gross abuses, Douhan blamed problems in those countries on Western sanctions. In February 2021, she undertook a major propaganda visit to Venezuela, portraying the Maduro regime as a victim of U.S. sanctions. Maduro cited Douhan in his latest speech to the UN General Assembly.

Douhan’s latest visit is to Zimbabwe, a country rated “Not Free” by Freedom House and sanctioned for its poor human rights record by the U.S., the UK the European Union and others.

Zimbabwe’s regime invited Douhan as part of its campaign to lift international sanctions. “We welcome the UN Special Rapporteur Dr, Douhan, who is coming to interact with our people to unpack the effects of sanctions,” said a spokesperson.

“It was a pleasure to welcome the UN special rapporteur for human rights to Zimbabwe,” said President Emmerson Mnangagwa, after meeting with Douhan in the capital Harare. “Her 10-day trip aims to assess the impact of punitive economic sanctions on ordinary Zimbabweans. These sanctions are illegal and hurt the most vulnerable in our society.”

Despite the regime’s claims that international sanctions have undermined the Zimbabwean economy, the reality is that the U.S., UK, EU and others have applied targeted sanctions to individuals and companies linked to the ruling Zanu PF party’s human rights abuses and not against the country itself.

Douhan  to Meet with 26 Regime Ministers

In addition to a meeting with the president, Douhan’s initial itinerary included individual meetings with an astonishing 26 government ministers as well as other officials.

Notably, however, the supposed human rights expert did not plan to meet with members of the opposition or civil society.  Neither would Douhan be speaking with the media as, according to government officials, this would “jeopardize” her mission.

Bizarrely, though, Deputy Foreign Minister David Musabayana claimed that “as a government, we are not even privy to whom she is going to meet. She just said non-governmental organizations (NGOs), civic society groups or any other interested groups would also be involved.”

“As government, we have been asked to stay away from her. We have not looked for her or phoned her. I don’t even know where she is and what she is doing because it is her independent research. She has her own systems on how she is going to navigate, to get the leads and get the information that she needs,” he said.

Is sending 26 ministers to meet Douhan the government’s idea of staying away from her?

The top-heavy emphasis in her itinerary hardly comes as a surprise given Douhan’s previous visit to Venezuela, of which a U.S. State Department spokesperson noted: “Instead of meeting with NGOs, independent journalists, members of the opposition, political prisoners, and other victims of harassment and attacks directed by Maduro and his supporters, the UN Special Rapporteur visiting Caracas spoke almost only to regime insiders and others the regime authorized.”

This sentiment was echoed by UK-based Zimbabwean academic Alex Magaisa, who said “the so-called special rapporteur who comes from Belarus, one of the world’s biggest human rights violators, which is also facing sanctions, is hardly an honest broker. Her itinerary, which is brazenly one-sided, is a clear indicator that the script has already been written in advance.”

Eventually, perhaps under pressure to at least give the impression of balance, the Office of the UN High Commissioner for Human Rights Commission (OHCHR) released a statement inviting submissions from all interested parties saying that Douhan “would also like to meet with non-governmental, business community, civil society organizations and opposition, in particular, those whose activities may be affected by unilateral coercive measures, as well as academics with specific expertise in this field.”

The statement is similar to comments Douhan made during her Venezuela trip where she claimed to have “sought to meet the widest range of people to listen to their experience and insights,” including opposition members. Whether she in fact will meet with and listen to Zimbabwe opposition figures is the question.

If her Venezuela mission is any guide, Douhan’s report to the UNHRC on Zimbabwe, due next year, will likely call for the lifting of sanctions with little or no consideration for the regime’s abuses that prompted them, blame Western democracies for problems caused by Mugabe and his successor, and turn a blind eye to the government’s oppression of the Zimbabwean people.