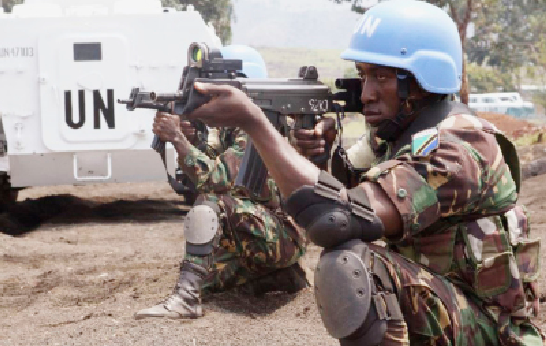 On May 29, Zimbabwe joined the rest of the world in commemorating the International Day of United Nations (UN) Peacekeepers. The day acknowledges the contributions of the “blue helmets” and honours more than 3 700 who have lost their lives serving the cause of peace since 1948.

It is a poignant reminder of the dangers confronting a multitude of peacekeepers serving in increasingly challenging volatile environments around the world. Indeed, peacekeeping has developed into a signature enterprise of the UN, with the global body spending US$6,8 billion in 2017/18 to maintain around 100 000 peacekeepers deployed in 14 operations worldwide, compared with just US$500 million at the end of the Cold War.

Zimbabwe was once one of Africa’s post-Cold War peacekeeping powerhouses in the 1990s, with its troop contributions surging past the 1000-mark annually. Over the past two decades, the country’s contributions to UN peace operations have been modest amid domestic economic decline and a toxic political environment.
In 2017, Zimbabwe had less than 100 of its uniformed forces serving in Sudan and South Sudan (this made Zimbabwe the 71st and 28th largest contributor of peacekeepers in the world and Africa, respectively).

Significantly, the changes in the world’s geopolitical and security terrain, including the emergence and influence of new threats, technologies and actors, have impacted on conflict dynamics and the roles and functions of UN peace operations since Zimbabwe’s heyday.

Zimbabwean service personnel were then part of traditional deployments to “keep the peace” in post-conflict countries like Liberia and Sierra Leone. Current UN peace operations are often confronted with more complex and dangerous environments where there is “no peace to keep” like in the Central African Republic (CAR), the Democratic Republic of the Congo (DRC), Mali and South Sudan.

As a consequence, contemporary UN peace operations are dogged by six key challenges:
l Purpose and relevance;
l Safety and security of UN peacekeepers;
l National caveats;
l Protection of civilians (POC);
l Western troop-contributing countries’ (TCC) disengagement; and
l Sovereignty.
Firstly, UN peace operations are grappling with answering questions as to what purpose they are being mandated for, and how the global body can make them “fit for purpose.”
Specifically, are peacekeepers there to monitor peace or to enforce it, and are they suitable for either mission? There remains concern about the so-called “Christmas tree mandate” dilemma, where template language for military and technical tasks routinely appear in UN peace operation mandates, which do not match political realities in troubled host countries such as CAR, the DRC, Mali and South Sudan.

The UN Security Council is therefore confronted with crafting political solutions, which can guide the design of focused and tailored mandates as well as deployment of effective peace operations, which can create peace and make it last.

Secondly, the safety and security of UN peacekeepers has been increasingly under threat over the past five years, due to deployment in countries mired in active conflict, culminating in 2017 being the riskiest year in a quarter century for UN peace operations. In December 2017, the UN released the report Improving Security of United Nations Peacekeepers (informally known as the Cruz Report), which recommended a fundamental shift of peacekeeping toward a more “proactive posture,” requiring that peacekeepers use “overwhelming force” in the face of hostile actors. This raised concern among risk-averse TCCs in a manner closely connected with the next two challenges.

Thirdly, given the dangerous context in which UN peace operations increasingly deploy, some TCCs have invoked national caveats to limit the roles of their personnel while on peace operation duty, thereby impeding the capacity for vigorous action required by robust mandates.

New caveats produced in the course of peace operations regarding the use of TCCs military contingents, particularly undermine the chain of command and the effectiveness and integrity of operations on the ground.

For instance, the Indian contingent of the UN Organisation Stabilisation Mission in the Democratic Republic of the Congo (Monusco) once reportedly resembled bystanders to mass killing, rape and terror, having refused to follow orders given by the UN Force Commander.

Congolese rebels were also able to seize the eastern town of Goma under the watch of the largest peacekeeping force in the world. It is little wonder that the Cruz Report has demanded an end to the practice of adding onerous caveats to troop contributions.

For instance, the UN Mission in South Sudan’s (UNMISS) military component has found it physically impossible to provide physical protection to civilians. Additional limitations are posed by UNMISS’s strictly impartial mandate, slow force generation, significant logistical and accessibility challenges, requirements of troop rotation, and early warning mechanisms that are unable to predict everywhere that violence against civilians will occur.

This led some to sarcastically label UNMISS — “UN Missing in South Sudan.” The UN Multidimensional Integrated Stabilization Mission in the Central African Republic (Minusca), was ineffective in protecting civilians from violence as it had too few troops, who lacked the right skills, equipment and coordination.

In the DRC, the “blue helmets” were once perceived as “tourists in helicopters” by Congolese civilians still subject to grisly killings and rapes in the North Kivu region. Furthermore, sexual exploitation and abuse (SEA) by UN peacekeepers remains a scourge in some host countries.
Fifthly, over the past decade, participation from TCCs from the Western Europe and Others Group (WEOG), which includes Australia, Canada and New Zealand, tailed off as UN peace operations shifted to Africa. In 2016, there were no longer any WEOG countries in the Top 20 contributors to UN operations. Analysts saw this as a form of “apartheid peacekeeping” where mostly rich and powerful countries on the Security Council are reluctant to put boots on the ground as frontline peacekeepers but are prepared to send the poor to fight and die in volatile African theatres.
Troop contributors to Africa-based UN peace operations mainly came from either the continent itself or a few key Asian countries with less advanced equipment, limited air and sea lift capacity, including Bangladesh, India and Pakistan. Their ready contributions are partly driven by the economic rationale of making money for the countries and their security services. Even so, rapid deployment remained a challenge for the UN, with operations such as UNMISS taking long to reach 85% deployment.
Lastly, the issue of national sovereignty is another constraint to UN peace operations, which find it difficult to operate in countries where the governments do not want them. For instance, the UN has had to endure the Congolese government’s request for it to withdraw the long-running and taxing Monusco (whose acronym analysts say appropriately rhymes with “fiasco”).
UNMISS finds itself in a dilemma where, on the one hand, it needs to maintain the consent of the host nation for its ongoing deployment in South Sudan, while on the other hand the operation is tasked to protect civilians, with the use of force if necessary, including from government forces and militias.
Recalcitrant governments are somewhat emboldened by the emphasis of some Permanent Five members of the UN Security Council, particularly China and Russia, that peace operations must respect the sovereignty and wishes of host countries.
Way forward
Notwithstanding the above challenges, the UN can enhance peace operations and improve mandate delivery in the field.
Firstly, in line with the recommendations for strengthening the quality of peacekeeping in the 2015 High-Level Independent Panel on Peace Operations report, the UN Security Council should prioritise political solutions during mandate design.
The council should allow frank inputs and real involvement of other peacekeeping stakeholders to ensure realistic, focussed and tailored mandates. This can help avoid a superficial “one-size-fits-all” peace operations approach and facilitate a sustainable case-by-case approach that can promote the deployment of peace operations that are “fit for purpose”.

The rules of engagement must also be flexible and adapted to ensure strong missions capable of protecting peacekeepers and civilians. UN member states need to deliver on their pledges of logistical support, including air and sea lift capacity, to further reduce force generation and deployment times.
Thirdly, UN peace operations should continuously engage with host countries and local communities in order to design better protection strategies that more effectively improve the lives of the people they are deployed to serve and protect.

Fourthly, UN member states have to support anti-SEA initiatives not only rhetorically but also financially to ensure victims’ support, and TCCs have to take appropriate measures to prevent SEA and ensure criminal accountability of its perpetrators.

Lastly, any national caveats beyond the national restrictions expressly accepted by the UN secretariat at the outset of peace operations should be treated as disobedience of lawful command. Caveats need to be tackled by improved planning, dialogue and leadership to address friction between the UN and some governments of TCCs over who has ultimate command over peacekeeping troops.

Zimbabwe has an illustrious UN peacekeeping record. It has also not been averse to deploying personnel on the frontlines of non-UN missions. One such, was the controversial military intervention launched in partnership with fellow Sadc states, Angola and Namibia, into the DRC in support of the Kabila regime, between 1998 and 2002.
Although Zimbabwe has downscaled its troop contributions to UN missions, keeping an eagle eye on their contemporary challenges and prospects would do no harm for when the country’s political leadership decides to re-enter the peacekeeping game in a big way.

Dzinesa is a freelance peace and security researcher, author of disarmament, demobilisation and reintegration in Southern Africa and co-editor of Peacebuilding, Power and Politics in Africa.