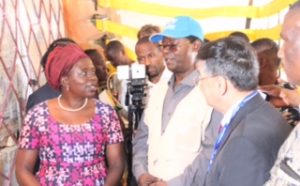 “The devastating cyclone has left people in dire need of humanitarian support,” said UNHCR Country Representative Robert Tibagwa while handing over the airlifted relief items at Robert Mugabe International Airport. “UNHCR supplies will help provide shelter and basic items to survivors, including women and children, as they have lost everything.”

UNHCR is part of humanitarian team working in close collaboration with the Government of Zimbabwe and other humanitarian partners to ensure people receive the required assistance and are protected from risks and dangers. UNHCR has also deployed a team of emergency experts to support relief efforts. 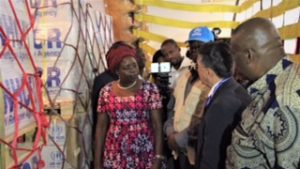 In Zimbabwe, it has been reported that Tropical Cyclone Idai has displaced an estimated 90,000 people in nine districts mainly in the eastern highlands part of the country. The cyclone has reportedly killed over 200, with some 300 still missing and has affected 270,000 people. Vulnerable people, including women and children, are at risk and in need of relief and recovery support. About 95 per cent of the infrastructure, including schools, roads and bridges have been damaged in Chimanimani districts.

Zimbabwe hosts some 20,000 refugees and asylum-seekers mainly in Tongogara Refugee Camp where some 1060 houses were damaged by Cyclone Idai affecting some 5,300 people. The water and sanitary infrastructure was severely affected leading to a shortage of clean drinking water.

UNHCR is grateful to its corporate partner International Humanitarian City (IHC) which has donated the aid flight.

The airlift is part of UNHCR efforts to provide aid to thousands of people in Malawi, Mozambique and Zimbabwe. A plane carrying UNHCR relief items arrived in Maputo, Mozambique last week. Another flight is on its way to Malawi today (Sunday).