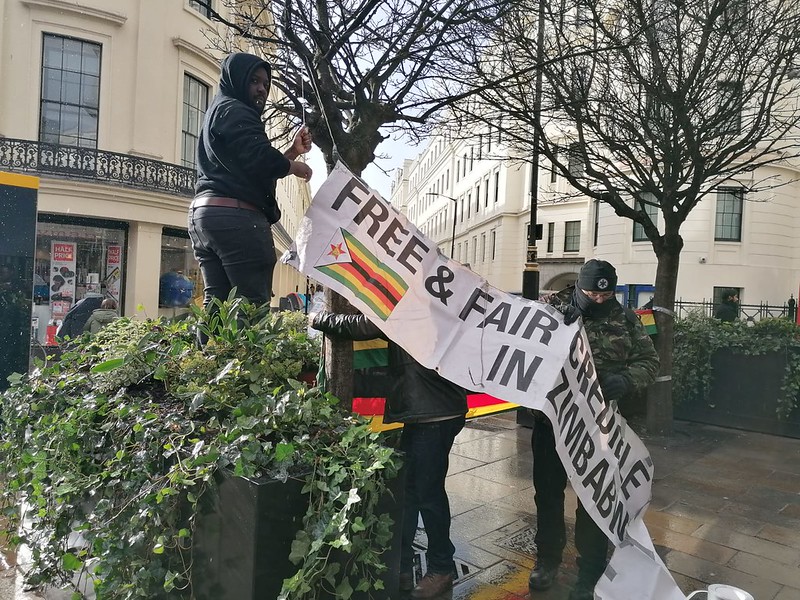 Secret money printing by the government, subsidised grocery shops set up in military barracks and a quarter of a million US dollars handed over in cash to Mnangagwa’s daughter – just some of the stories circulating in Zimbabwe.

Zimbabwe has long been a member of the club of failing states which, with Russia’s help, include such corrupt regimes as Iran, Syria and Venezuela. An article in the UK Times this week explained how these regimes prosper from catastrophe: how the unbelievable becomes the reality.

The writer, Roger Boyes, concludes that ‘enforced poverty depoliticises rather than radicalises the population’. He says: ‘Revolutions erupt because of rising but thwarted expectations. So the primary task of kleptocrats is to banish ambition. The ambitious, the able-bodied, the desperate flee the country in droves. And the leaders are OK with that, too. One day, they figure, the pressure of refugees mounting up in western countries will force the outside world to strike a deal with leaders who have demonstrated their survival skills. Allowing their states to fail gives them a perverse advantage: it makes them indispensable. As a result many people in these miserable states don’t even pretend to trust their leaders. Better muddle through with the ruler we know, is the short-term calculation, than topple him and risk the wholesale collapse of society.’ (See: http://www.zimvigil.co.uk/vigil-news/campaign-news/1063-why-do-some-failing-states-never-fail.)

A sobering assessment, which perhaps explains Russia’s renewed interest in Africa’s raw materials and profitable reasons for propping up the Zanu PF regime – with or without Mnangagwa, whose tenure in office may soon be terminated, according to the maverick former Zanu PF minister Jonathan Moyo, stirring up trouble from the safety of South Africa.

Moyo talks of an exit package being agreed with military chiefs under which Mnangagwa would get a settlement of US$10 million and continued benefits on leaving office, as well as ‘a modest motorcade’. In a separate tweet Moyo speaks of Mnangagwa’s daughter collecting an apparent down payment of a quarter of a million dollars from the Reserve Bank as part of a payment of $5 million (See: https://zwnews.com/mnangagwa-daughter-fraudulently-gets-us250k-from-rbz-no-receipts-for-transaction/.)

In Harare’s febrile culture these stories may prove to be off mark, but allegations of secret money printing by the Central Bank are anchored on a statement by the International Monetary Fund. IMF officials found that more of the dodgy Zimbabwe dollars were being printed to provide subsidies for gold producers (see: https://www.ft.com/content/4ae27da8-5967-11ea-abe5-8e03987b7b20).

As the cost of living soars the government have resorted to providing soldiers with subsidised basic commodities to stem unrest (see: https://www.theeastafrican.co.ke/news/africa/Zimbabwe-military-shops/4552902-5471140-tqj028z/index.html). The police will have to be next . . . and then teachers . . . until the only ones paying the cost will be – who else but the people.

A welcome revelation came in the state-owned Herald newspaper that the Zimbabwe Anti-Corruption Commission has identified over US$7 billion in cash and assets stashed abroad. ZACC Chairperson and former High Court judge, Loice Matanda-Moyo, said ‘Informally, we have now identified over US$7 billion worth of property and cash all over the world which were siphoned by our former leaders, current leaders, private sector and individuals. So this information we only got informally, so now we have to formalise the process so that we start the processes of repatriating the monies back home’. (See: https://www.iol.co.za/business-report/economy/zimbabwe-pursuing-billions-of-dollars-stashed-in-foreign-countries-43505463.)

Good luck to judge Matanda-Moyo but the Vigil bets the odds on jailing any ‘former or current leaders’ are approximately zero.

FOR THE RECORD: ­­­9 signed the register.