WASHINGTON, United States – The United States on Wednesday imposed sanctions on Sakunda Holdings and businessman Kudakwashe Regimond Tagwirei, blacklisting one of the most prominent businesspeople in Zimbabwe and an adviser to President Emmerson Mnangagwa. 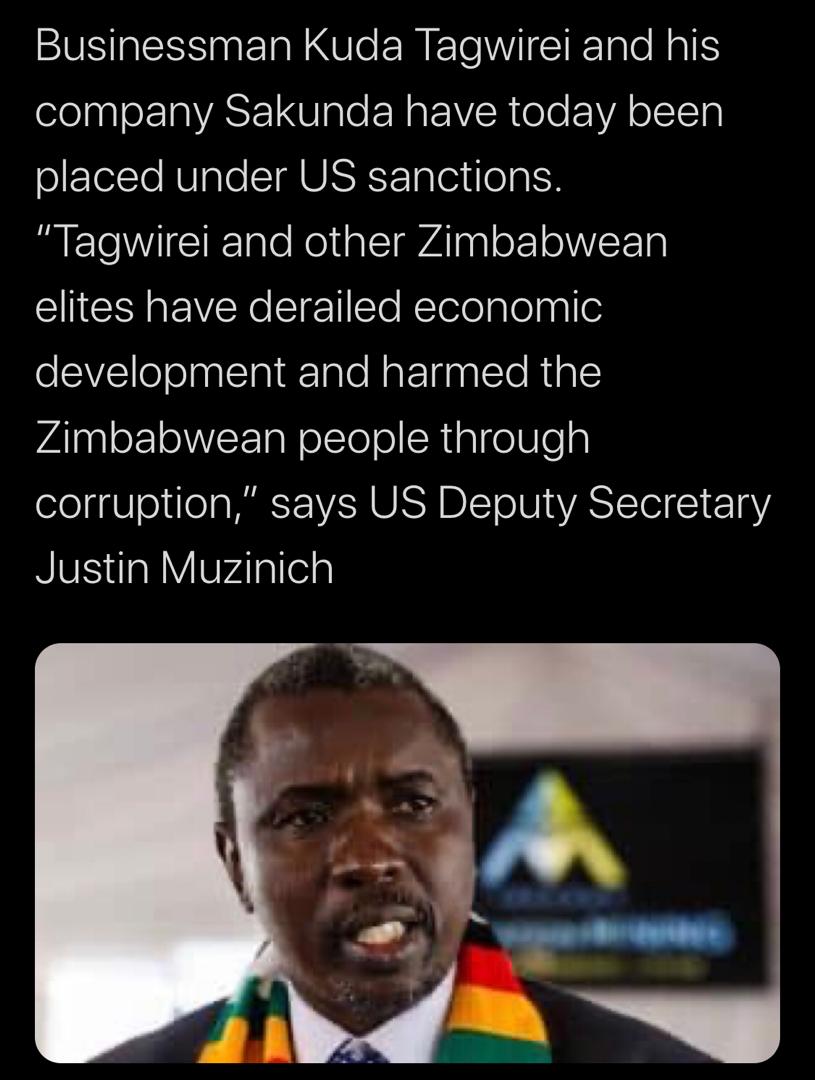 The United States Department of the Treasury’s Office of Foreign Assets Control (OFAC), in a statement, said the 51-year-old was designated for providing support to the leadership of the government of Zimbabwe, as well as Sakunda Holdings for being owned or controlled by Tagwirei.

“The United States supports the economic well-being of the Zimbabwean people and will target repressive and corrupt acts and graft by Zimbabwean politicians and their financiers.”

“In turn, Tagwirei has provided high priced items, such as expensive cars, to senior-level Zimbabwean government officials. Tagwirei has used a combination of opaque business dealings and his ongoing relationship with President Mnangagwa to grow his business empire dramatically and rake in millions of U.S. dollars,” OPAC said in a statement.

Government audit reports prompted a 2019 parliamentary inquiry into whether public funds were misappropriated, revealing the government had failed to account for about US$3 billion disbursed under the Command Agriculture programme, a state farm subsidy championed by President Mnangagwa and largely financed by Sakunda Holdings.

Tagwirei also recently took over five state-owned gold mines and is linked to a multi-million-dollar tender to supply public transport buses for the state owned bus company, ZUPCO, which he won without going to tender.

The U.S. government said Tagwirei was targeted for his financial links with Mnangagwa and his deputy Constantino Chiwenga, who were slapped with sanctions in March 2003 and November 2005 respectively, and remain on OFAC’s List of Specially Designated Nationals and Blocked Persons.

Tagwirei “materially assisted, sponsored, or provided financial, material, logistical, or technical support for, or goods or services in support of, the government of Zimbabwe, any senior official thereof, or any person whose property and interests in property are blocked” while Sakunda Holdings was designated “for being owned or controlled by, or for having acted or purported to act for or on behalf of, directly or indirectly, Tagwirei.”

U.S. Secretary of State Michael Pompeo said the action on Tagwirei was deliberately time to mark the second-year anniversary of an August 1 crackdown by security forces after Mnangagwa appeared set to claim a controversial election victory in 2018.

“Two years ago, Zimbabwean authorities launched a violent crackdown against citizens who were protesting flawed elections. That same government has yet to hold anyone accountable for the six protesters who were killed that day. To mark the anniversary of their deaths, the United States is taking action to fight corruption in Zimbabwe,” Pompeo said.

He said the United States supports a stable and democratic Zimbabwe, and the measures against Tagwirei “demonstrate to the government and people of Zimbabwe that the United States does not tolerate corruption and will promote accountability for perpetrators of public corruption.”

“Targeted sanctions only restrict trade and travel for those who practice corruption, violate human rights, and undermine democratic institutions,” the embassy said.

Mnangagwa blames the opposition, Western sanctions, droughts and the pandemic.