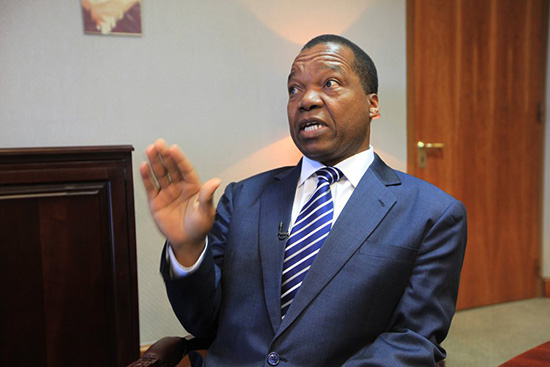 HARARE (Reuters) – Zimbabwe’s central bank left its benchmark interest rate at 35% on Monday, citing moderating inflation, as it looks to print more local currency and limit the use of foreign currencies.

Zimbabwe is struggling through its worst economic crisis in a decade, with prices of basic goods soaring and shortages of medicine, fuel and electricity worsening. Hopes of a quick recovery under President Emmerson Mnangagwa are fading.

The worsening poverty is upsetting the fragile calm that’s prevailed since the 2017 coup that toppled long-time ruler Robert Mugabe.

After suspending publication of annual inflation data, which economic analysts put at 525% in December, authorities will resume printing the figures next month.

Governor John Mangudya was bullish on inflation, projecting that annual price growth would dip below 50% by the end of the year. Monthly inflation fell in January to 2.23%

“Our task is we stabilize inflation and stabilize the exchange rate. We expect month-on-month inflation will continue to come down until the end of the year,” Mangudya said.

“Most of the inflation is caused by non-monetary factors. That is expectations – that ‘I lost money in 2008’,” Mangudya said. “This is a once-beaten, twice-shy scenario. These are things that shape inflation in Zimbabwe.”

Zimbabweans have little confidence in monetary policy after pensions and savings were wiped out at the height of hyperinflation, which reached 500 billion% in 2008 and forced the country to dump its local currency.

Last year in June, Zimbabwe ended a decade of dollarisation, which fuelled inflation. Mangudya said it would take up to five years to completely wean Zimbabwe from using the U.S. dollar in local transactions.

Seeking to reassure investors, the governor said foreign currency accounts held by companies, donors and individuals were safe, while businesses like mines would continue to receive a portion of their export earnings in dollars.

To ease shortages of cash, the bank will feed higher- denomination Zimbabwe dollar notes into the economy while increasing transparency on foreign currency trading to stabilise the exchange rate.