THE President, his deputies, top Government officials and parastatal bosses will be among senior public officials to face a 5 percent salary cut in January as Government implements austerity measures to contain costs as part of a cocktail of measures to turn around the economy. 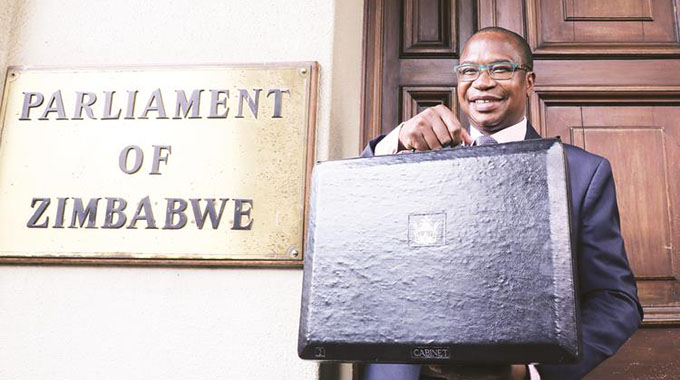 Hebert Zharare Editor, Business Weekly
THE President, his deputies, top Government officials and parastatal bosses will be among senior public officials to face a 5 percent salary cut in January as Government implements austerity measures to contain costs as part of a cocktail of measures to turn around the economy.

Also diverting from past practice, civil servants’ bonuses — most likely to be paid before year end — will be calculated on basic pay as is the case in the private sector.

Presenting an US$8.16 billion 2019 National Budget in Parliament yesterday, Finance and Economic Development Minister Professor Mthuli Ncube assured the nation of Government’s commitment to ensure bitter measures, including retiring all civil servants above 65 years of age and retrenching over 3 000 youth officers.

“Mr Speaker Sir, it is critical that we reduce public spending on employment costs. As a first step, Government has decided that effective 1 January 2019, a 5 percent cut on basic salary, be effected for all senior positions from principal directors, permanent secretaries and their equivalents up to Deputy Ministers, Ministers and the Presidium.

“This is also extended to basic salaries of those in designated posts in state-owned enterprises (CEOs, Executive Directors and equivalent grades), including Constitutional Commissions and grant-aided institutions. A standardisation/alignment exercise in remuneration including benefits for Constitutional Commissions, will also be undertaken to remove inequity and disparities,” said Minister Ncube.

He said Government was mindful of the hard work by its employees and would pay them bonuses this year.

“With regard to the 13th Cheque payment, Government recognises that this is an integral component of the Remuneration Framework. Government appreciates the hard work its employees render in their various portfolios and services. Accordingly, Government has taken the position that bonus be payable for 2018, with commitment that these payments be processed before year end.’’

Traditionally, payment of the 13th cheque is computed as the sum of basic salary, housing and transport allowances. Previously, the Budget incurred expenditure of around $174,6 million in bonus payment.

“In light of the resolve to ensure that expenditure commitments do not further worsen challenges associated with deficit financing that have placed us in the prevailing difficult situation that we find ourselves in, the 13th Cheque is, henceforth, computed based on basic salary only (excluding housing and transport allowances),” he said.

On diplomatic missions, Minister Ncube said Zimbabwe has diplomatic presence at 46 embassies and consulates, staffed by around 581 home based and locally recruited staff.

The Minister said the diplomatic presence was imposing annual budgetary support levels of around $65 million, which is above available 2018 Budget capacity of $50 million.

He said Government resolved to reduce the number of foreign missions, thereby optimising the utility value realised from the remaining missions as well as avoiding accumulation of arrears and embarrassing evictions of diplomats from properties in foreign land.

He said Treasury mobilised over $5,2 million in December 2017 towards three months’ Cash In-Lieu of Retirement Notices and in the second instance, $17,7 million in February 2018 towards the officers to be trenched s Pension benefits.

The 2019 National Budget also further operationalised the policy of retiring all Government officials above 65 years.

He said Government was implementing a biometric Register for Civil Servants in 2019 to flash out people drawing Government salaries without rendering any service.

“Mr Speaker, Sir, previous Civil Service Audits undertaken by Government in 2011 and 2015, respectively, point to possible existence of ghost workers in the service, who are contributing to the burgeoning public service wage bill which accounts for over 90 percent of total revenues.

“Clearly, this goes against the thrust of re-orienting Budget expenditures towards growth enhancing and poverty reducing developmental programmes and projects through rationalisation of the Public Service Wage Bill.

“To weed out these ghost workers, I propose to introduce a biometric registration of all civil servants, with effect from 1 January 2019. The registration process will be rigorous and will involve capturing data on Letter of Appointment, Academic and Professional Qualifications, National Identification Documents, Employment Code Numbers, and Biometric Data. Biometric data will involve capturing of one’s unique physical attributes such as fingerprints, DNA, iris and retina pattern, using ICT.

He said Government wanted to save money by improving the management system of the Government fleet parking all pool vehicles during weekends and after official duty at work stations or police stations.

“This framework will be cascaded to other categories of the Public Service such as Independent Commissions, Parliament, Judiciary and State entities,” said.