US roasts ED over police brutality 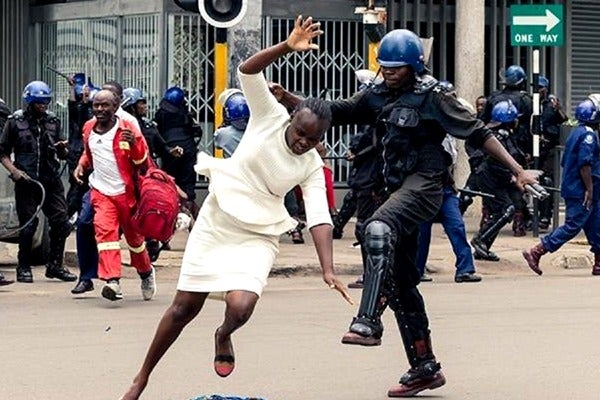 PRESIDENT Emmerson Mnangagwa is under immense pressure to act and stop the wanton attacks on unarmed civilians.

This came as the government and the European Union have started “high level” talks in the Mnangagwa’s re-engagement exercise.

There has been worldwide condemnation following the brutal assault by the police in Harare of scores of people ahead of the Hope of the Nation Address by opposition MDC leader Nelson Chamisa on Wednesday.

United States government, through its Assistant Secretary for the Department of State’s Bureau of African Affairs, Tibor Nagy, said there was growing concern over the Mnangagwa administration’s continued disregard of the people’s freedoms as enshrined in the Constitution.

“We are concerned by the police’s unprovoked use of force against peaceably assembled Zimbabweans and call on the Government of Zimbabwe to cease such violence against its own population,” he said.

“We note that the passage respect of freedom of assembly and other rights. We urge the Government of Zimbabwe to respect its 2013 Constitution of permitting non-violent public gatherings.”

Political analyst Alexander Rusero said Zimbabwe had reached boiling point and the situation in the country, particularly violence against civilians by the police, was creating a bad image for Mnangagwa. Rusero said urgent action was needed to stop the beatings.

“It is the final blow to ED’s efforts, if ever they were genuine, to posture as a reformist and someone who has significantly departed from the brutal (late former President Robert) Mugabe script,” he said.

“You can’t unleash a police contingent at that magnitude to harmless, unarmed civilians, worse off women and the elderly. Two years after Mugabe’s ouster was an opportune moment to have a sigh of relief as a country and beginning the process of healing and nation building. Unfortunately, ED has squandered that opportunity to be embraced as the compassionate, reformist and civil leader.

It has but confirmed South Africa’s sentiments that Zimbabwe is highly inflicted by toxic politics.”

The Crisis in Zimbabwe Coalition said it was engaging Sadc countries and the international community to urgently call for inclusive dialogue among the country’s political protagonists to end the crisis in the country.

Sadc executive secretary Stergomena Tax, speaking after meeting an MDC delegation on Wednesday, said: “I reiterated continued Sadc support to Zimbabwe and called upon all players (internal and external) to co-operate and put the interests of Zimbabweans first.”

Meanwhile, on government’s “high-level” talks with the European Union, Information permanent secretary Ndavaningi Mangwana confirmed that the talks had begun, saying a communiqué will be released after the engagements.

“The engagement started today (yesterday) and that is all I can say. It is just re-engagement at ministerial level,” he said.

Pressed on details on who they were meeting exactly from the EU, Mangwana said: “Like I said, a communiqué will be released.”

Relations between the EU and Zimbabwe have not been rosy and the latest developments may present an opportunity for the two parties to mend their differences.

The EU confirmed the talks on its official Twitter account, saying the talks, dubbed the second edition of the formal political dialogue, include issues on investment, human rights, rule of law and good governance.