Use of hazardous pesticides rises as armyworm spreads 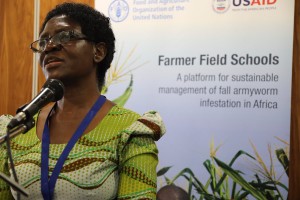 Source: Use of hazardous pesticides rises as armyworm spreads | The Financial Gazette March 8, 2018

INDISCRIMINATE use of hazardous pesticides by farmers has increased following the emergence of the fall armyworm, which is in its second season on the African continent, a Food and Agriculture Organisation (FAO) official has said.

The fall armyworm was first detected in Nigeria in January 2016 and quickly spread across virtually all of sub-Saharan Africa. It is a relatively new pest and there is no proven pesticide to contain it.
Joyce Mulila-Miti, FAO plant production and protection officer for southern Africa, told The Financial Gazette that farmers were trying all sorts of remedies.

“This is not only a problem in Zimbabwe. It’s prevalent throughout Africa. In all the countries where the pest has been identified, there has been an increased use of these pesticides,” Mulila-Miti said.
Unregulated use of pesticides is hazardous to both the environment and humans. Consumption of green mealies is of particular concern because at that stage of plant growth, the pesticides would not have degraded.

“Farmers should read labels as they clearly show the class in which a pesticide falls. Labels are meant to inform farmers on what can be used and what cannot be used,” Mulila-Miti said.

The Department of Research and Specialist Services has recommended 15 pesticides and three bio pesticides for registration and use against the fall armyworm.

“Bio pesticides are less dangerous than synthetics. So it is good news that we are at least getting materials which are low risk. We are hoping, because fall armyworm is a serious problem, the government will fast-track the registration,” Mulila-Miti said.

Fall armyworm infestations have been reported in all provinces and the pest is expected to be a threat to surviving crops for the remainder of the 2017/18 season.

Knowledge gaps exist about the estimated rates of infestation in areas affected by the fall armyworm. Government and partners are training agriculture extension staff and farmers on identifying and managing the pest and infestation is expected to be lower this season.