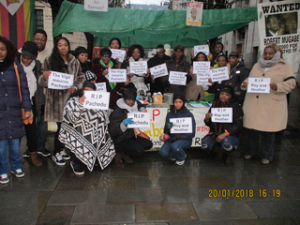 The Vigil was in mourning for Roy Bennett who encouraged us to mount our public protest outside the Zimbabwe Embassy in London in 2002 and who remained a constant support in the many years since then.

Roy and his brave wife Heather, who died in a helicopter crash in the United States on Wednesday, were true heroes in the struggle for democracy in Zimbabwe. A farmer elected to parliament for the new MDC in 2000, he was an eloquent opponent of the Mugabe regime, partly because he was a fluent Shona speaker with devoted local support for a democratic, non-racial future.

Today we particularly remembered the time that he and Heather put on our tshirts and joined in the singing and dancing at the Vigil. In those darkest of times he said the Vigil was ‘a fire in Mugabe’s bum’. He was speaking shortly after his release from an horrendous spell in prison. But whatever happened to him he retained a deep love of Zimbabwe and faith in the future of Zimbabweans.

In recent years he had been farming in Zambia but, with the overthrow of Mugabe, we had hopes he would return to Zimbabwe and help turn around farming in the country, given President Mnangagwa’s promise of a new beginning and free, fair and credible elections.

We will all miss his advice in this time of change. Mnangagwa has rejected Mugabe’s counter-productive populist policies such as indigenization, and says he will allow Western observers for the elections. But the Vigil is not persuaded by his appeal to ‘let bygones be bygones’. If the nation is to be healed there must be a full truth and reconciliation process, however painful this may be.

Roy expressed his joy at the ousting of Mugabe in an interview with CNN (See: http://edition.cnn.com/videos/world/2017/11/21/intv-amanpour-roy-bennett-zimbabwe.cnn ). He said never before had he been so proud to be a Zimbabwean. He added that Mnangagwa and Chiwenga were Mugabe’s accomplices and were hated by the people. They must apologise and introduce reforms. The genii had been let out of the bottle and never again would there be a dictatorship in Zimbabwe.

But there were few signs of repentance in a lengthy interview Mnangagwa gave this week to the London Financial Times (see: http://www.thezimbabwemail.com/opinion/transcript-financial-times-interview-mnangagwa/).

Newer Post
PICTURE CLUES: More Details On How Bennett, Wife And Others Were Killed In The Helicopter Crash
Older Post
Vendors Vow They’re Ready To Square Off With Soldiers