In this picture collage, President Mnangagwa, Vice Presidents Constantino Chiwenga (on the President’s right) and Kembo Mohadi (to his left) and some Cabinet ministers follow proceedings on the screen at the inaugural Cabinet virtual meeting from the State House tent, New Munhumutapa boardroom (above left) and Cabinet Room in Harare yesterday. — Pictures: Tawanda Mudimu and Innocent Makawa

Government yesterday held its inaugural Cabinet meeting on a highly secure virtual platform as part of national efforts to curb the spread of Covid-19 by keeping groups of ministers in separate locations when they need to meet.

To ensure maximum security of information, the Government developed an in-house virtual conferencing software application and virtual private networks for use in conducting Cabinet committee meetings. Cabinet meetings are regarded as top secret in all countries and the system developed within Government circles had to be secure. 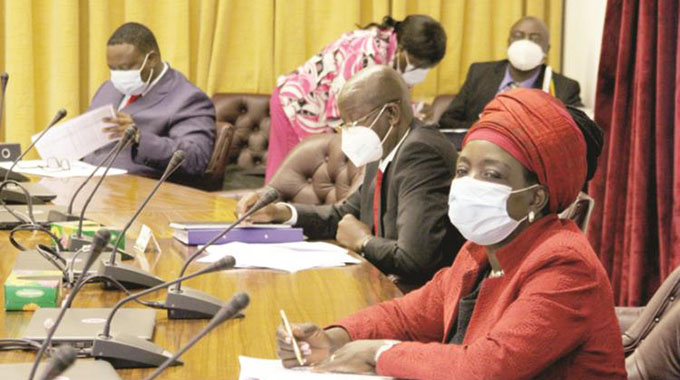 Other ministers were in the Munhumutapa new boardroom.

The launch follows the decision by Cabinet to adopt a virtual system for its meetings as part of measures to curb the spread of Covid-19 and in line with World Health Organisation guidelines.

The system, which is user friendly while it ensures top notch security, was developed using local software. 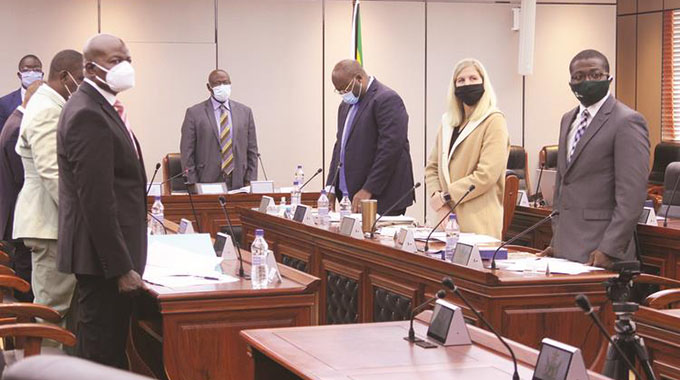 The technical team that developed the technology included the Ministry of Information Communication Technology, Postal and Courier Services, Cabinet Secretariat Department, President’s Department, Government Internet services provider and the e-Government technology unit in the Office of the President and Cabinet.

President Mnangagwa said the outbreak of the global pandemic had necessitated expeditious implementing of the process.

“Owing to the increasing number of cases attributed to local transmission we agreed as Cabinet to adopt virtual meetings as part of measures to comply with the WHO guidelines.

“The decision also took into account the progress our systems have achieved in migrating to virtual platforms with the e-Government technology unit assuming a leading role in that regard.

“Our virtual meetings will be held on secure home-grown platforms which are being perfected as we move on,” he said.

The President said all Government business will be conducted on the virtual platform, rather than foreign and commercial software platforms such as Zoom, when dealing with classified Government information except when being hosted by other partners outside Government.

“As per practice, the agenda will constitute the invitation to all meetings. Members will be advised of the meeting venues in accordance with the matters under discussion on the day according to the agenda.

He said given the logistical requirements associated with the distribution and circulation of Cabinet documents and the need to maintain safety in the Covid-19 era, business will be strictly as on the agenda.

“As the executive we have to lead by example. Our focus on the attainment of Vision 2030 remains on course,” he said.

The President urged Cabinet members to embrace the new mode of doing business.

Chief Secretary in the Office of the President Dr Misheck Sibanda said to ensure maximum security of information, the technical team developed an in-house virtual conferencing software application and virtual private networks for use in conducting Cabinet committee meetings

“We have distributed guidelines on virtual conferencing for Cabinet with a handbook,” he said.

Head of the e-Government technical team, Brigadier Gen Charles Hwekwete, said the system comprised hardware which was bought while the software was developed in-house within Government and using Government-owned ICT companies.

“It is equivalent to Zoom but developed in way that information will stay within our network to ensure security,” he said.