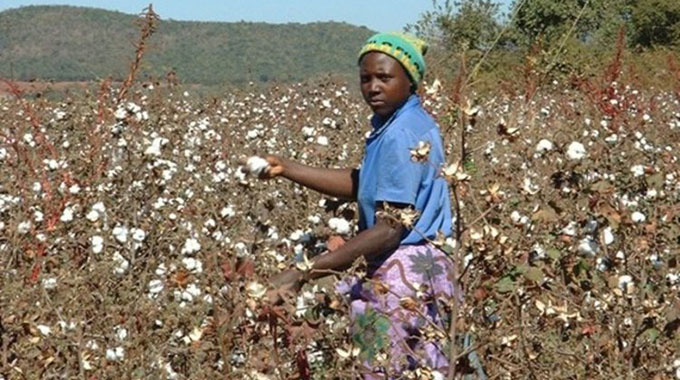 Martin Kadzere Senior Business Reporter
SIDE-marketing manoeuvres by some private cotton firms have come under spotlight as it emerged that names of dead people and children under 10 are appearing in the Agriculture and Marketing Authority (AMA’s) data base listed as beneficiaries of contract schemes.

Investigations by The Herald Business have revealed that private cotton companies, particularly Southern Cotton of Zimbabwe and Alliance Ginners have registered several ghost farmers to justify the hectarage they claim to have sponsored or financed.

The Government, through the Cotton Company of Zimbabwe (Cottco) contracted nearly 400 000 farmers after investing $62 million into cotton production. A yield of about 100 000 tonnes is expected this year, up from the 74 000 tonnes produced last year.

The investigation covered several areas in Gokwe and Sanyati, where about 60 percent of cotton growers were financed under the Presidential Cotton Input Scheme, which is administered by Cottco.

It has emerged that private cotton companies only distributed cotton seeds, targeting the high volume areas sponsored by Cottco, to justify their presence in such places during the marketing season.

In some instances, the companies provided cotton seeds to spouses or children of farmers already contracted by Cottco, whom they intend to use to side market the state sponsored crop.

“This makes it easier to escape the jaws of the regulator as their (farmers’) commodity will be considered a free crop,” said Josiah Mubonderi, a village head in the Goredema area of Gokwe.

“A proper field validation by AMA would have helped to establish the level of support to farmers and the quotas entitled to contractors to avoid side marketing.”

To lure state sponsored growers, private cotton merchants are offering prices slightly above the interim government producer price of 47c, the minimum for 2017, to entice farmers into side marketing.

AMA has already allocated the buying quotas, giving a 75 percent share to Cottco, but explanation on how they came up with the quotas could not be established by the time of going to print.

“A lot of procedures are disregarded during distribution of inputs,” said an official with Agritex.

“Inputs are supposed to be distributed at common points but the private companies do it their own way. They just bring cotton seed, give it to a few people and provide a long list of farmers to AMA claiming to have supported them. Unfortunately, AMA do not verify and ends up having ghost farmers in its data.

“AMA then calculate the quotas based on the number of farmers in their data base; using their assumptions of expected minimum yields per hectare.

“How do you expect a farmer provided with only cotton seeds to manage the same yield as those who were provided with fertilisers and chemicals,” asked Masirus Mharadzi, a councillor in Gokwe North.

In terms of AMA regulations, contractors should provide farmers with inputs including cotton seeds, fertilisers and chemicals as well as extension services. But farmers contracted by private companies confirmed that they only received seed.”

“The seed came end of December and we were not able to plant because it coincided with a dry spell,” said Andrew Marezva, a farmer contracted by Southern Cotton. What happens now is that since my name is registered, I can only help Cottco farmers to side-market their crop because private companies normally offer higher prices.”

The Government is set to come up with this year’s cotton producer price, but last year’s lowest grade price was 47c per kg.

Cottco business manager for Sanyati Mr  Munyaradzi Chikasha said the company conducted its own validation, and discovered that some of the farmers had their relatives registered as contracted by other companies.

“We wanted to jointly conduct it with AMA but they were not forthcoming,” said Mr Chikasha.

Several villagers told this newspaper that the private companies were offering “better” prices and cash to entice farmers. As a result they were being tempted to side market their crop.

“We got everything from the government but Cottco should match the prices of the competitors if they are to improve their recovery,” said Gift Mwale, a farmer in Sanyati.

However, private contractors can pay higher prices since they would have invested little.

Efforts to get a comment from Southern Cotton and Alliance proved fruitless.