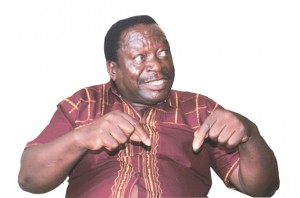 Addressing war veterans at Entumbane in Bulawayo on Sunday, Matemadanda said most banks in the country were reluctant to lend them money, claiming they had no capacity to pay back.

Even banks think that giving the comrades money is risky, but give the tsotsis (fraudsters) who have stolen millions,” he said.

“We are going to approach banks that want to work with us with the conditions the comrades have, so that those banks will be remembered for empowering comrades.

I know there are some banks which were opened by our monies and some of them have closed.”

Banks require collateral in form of movable or immovable assets as a prerequisite to lending.

It can be in the form of property, machinery or livestock.

Matemadanda said the issue of educational assistance for the war veterans’ children will also be looked into.

Last week, war veterans in Bulawayo called on government to honour its tuition fees obligations as their children were being sent home over fees arrears.

“The issue of education assistance is going to be centralised and we have discussed that the forms must be changed because we don’t want forms that are a headache to the people.

I was talking to the director and a new form that is user-friendly is ready,” he said.

Speaking on the land issue, he said on Friday they were in Matabeleland South where they briefed the Provincial Affairs minister Abednico Ncube over housing stands.

“We want to give stands to comrades who brought liberation to this country.

So we said they should talk to their district administrators and have a way forward or an affirmative action for comrades in the growth points and in towns where they live so that they get stands,” Matemadanda said.

“So we will come and talk to the Provincial Affairs minister [Judith Ncube] here in Bulawayo.”

Matemadanda said only those who do not have properties are eligible.

The former freedom fighters received Z$50 000 gratuity from government in 1997 under the War Veterans Act, as compensation for their contribution to the liberation struggle.

In 2014, they submitted a position paper to the Parliamentary Portfolio Committee on Defence and Security, demanding that government pays them $18 000 each in addition to the gratuity.