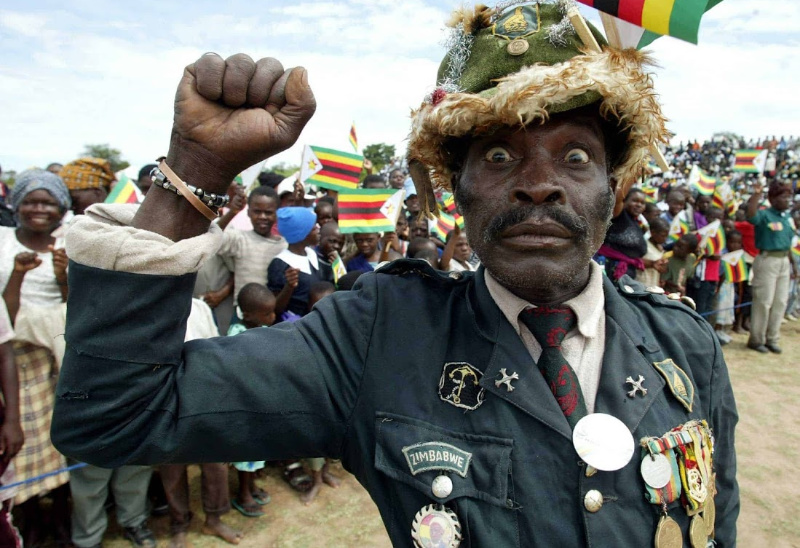 …say ED has lied to them

WAR veterans have accused President Emmerson Mnangagwa’s government of insincerity, lying and abusing former freedom fighters by falsely promising them money if they campaign for Zanu PF ahead of the 2023 general elections.

The war veterans told The NewsHawks this week that the announcement by Defence minister Oppah Muchinguri this week that the government was looking into the plight of the ex-combatants and war collaborators was a well-calculated lie to lure them into campaigning for Zanu PF.

Muchinguri this week said pensions for war veterans are being reviewed upwards to match those of the uniformed forces and the rest of the civil service.

“Government is working tirelessly to improve the welfare of the veterans of the liberation struggle. The pensions are being reviewed and benchmarked with uniformed forces and the rest of the civil service,” Muchinguri said this week.

But the war veterans, who have traditionally campaigned for Zanu PF in previous elections and have been accused of using violence in the process, particularly in rural areas, insist they will not be used and lied to this time.

“They have always been lying to us saying they gave us shares in mining and companies. They say all sorts of lies to us,” war veterans’ welfare pressure group chairperson Amos Sigauke told The NewsHawks this week.

“We have our case before the courts now where they are refusing to give us money. They have even hired expensive lawyers to defend their case and we wonder why we are not getting our money.”

The state insists they have a case to answer.

“Why would she (Muchinguri) lie to us like that? They are shameless and we have had enough of their lies,” Sigauke fumed.

Sigauke said the regime has resorted to arresting the ex-freedom fighters for demanding their dues. The timing of the new offer was suspicious and meant to position youths linked to the ruling elite at the feeding trough.

On suspicion that war veterans were being lured to garner support for Zanu PF ahead of the elections, Sigauke said this time they will not be used.

“We can’t have a handful benefitting from the country’s independence while the rest suffer. We can’t continue having such a situation. In saying they are pushing for some mujibhas to benefit, they want to push their own youths to get in and benefit and get onto the feeding trough ahead of 2023, but war veterans are wiser than that. We cannot have that.”

“They have failed to deliver for the last 41 years. We are not asking for the impossible, all we are asking for are our dues. We are asking for our money which is legally binding but was stolen by some of them. Imagine as we speak 39 of our comrades are before the courts for demanding what is theirs.”

The 39 are on bail with stringent conditions that include reporting every Friday to their nearest police stations.

“Imagine reporting every Friday at our age with the different (health) conditions we have. I personally go for dialysis and if I do not go to report I am arrested. We don’t take that nonsense,” Sigauke said.

“Now they are negotiating with white farmers to compensate them their US$3.5 billion and they did that because they fear them. They are subservient to the whites and where were these people during the war? Most of them ran away from the bush and were in hotels and universities while sacrificing others and they still want to sacrifice war veterans now but we are not going to do that, never again.”

He said Mnangagwa had promised to meet war veterans every April since 2018, but has not done so.

“They lied and in 2018 he said he will meet us every April. How many Aprils have passed since then? We can’t be lied to when he meets whites almost all the time and having dinners and all. Why do they launch their things in hotels and not Zimbabwe Grounds? We can’t be fooled like that. We are wiser than that.”

“We are all war veterans and bigger in our own right and they must not scare us to say shefu says this or that. We are all equal and of the same age, we fought the same war and no one should threaten anyone.”

“Tell me, who is in government now who was not there in 1980? What new things do they want to deliver now that they failed to deliver then? Everyone is crying and it is another way of hoodwinking the people by registering their own youths to benefit from the funds and campaign for them in 2023.”

“They should be sincere and they hired private lawyers to defend against giving us money.”

Muchinguri this week urged war veterans to use the “correct” channels to air their grievances and not resort to confrontation.

War veterans are unhappy with how the Zanu PF government is treating them. Sources say there was a heated meeting two weeks ago in Manicaland province where the party secretary for war veterans was quizzed by the ex-freedom fighters over the authorities’ insincerity in addressing their grievances.

“During the Manicaland meeting chaired by Cde Mahiya, war veterans were given the platform to share their views. Some of the issues raised include demands for a congress to elect new leadership,” sources who attended the meeting told The NewsHawks.

“They accused (Christopher) Mutsvangwa and (Douglas) Mahiya of holding them to ransom and using them for their personal gain. They openly demanded unity, the return of exiled G40s and declared that they are prepared to support any movement that has people at heart.”

The war veterans, sources said, raised the issue of welfare, accusing the government of giving them a paltry US$30 a month, no medical aid support and the sudden cutting of fees payment to both schools and institutions of higher learning.

“They accused the ED administration of failing to run the country and vowed not to campaign for ED until their demands are fulfilled.”