Harare – Zimbabweans have been expressing bemusement, and praise, over their new president’s sharp-eyed response to a spelling mistake on a plaque he had just unveiled.The plaque was uncovered on Wednesday at a ceremony to rename an army barracks in central Harare after Josiah Magama Tongogara, a hero of Zimbabwe’s independence war.
Watch the video below and the reaction from various social media users 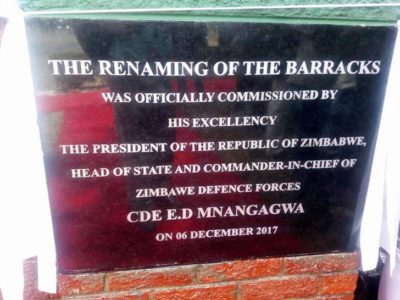 In a video of the incident shared widely on social media, President Emmerson Mnangagwa draws aside the curtains to reveal the new plaque, as Tongogara’s widow, Angeline, stands beside him. He reads through the brief information until he gets to the spelling mistake – Zimbabwe misspelt as “Zimbawe”. Immediately, Mnangagwa turns around and summons the army chief of staff, Douglas Nyikayaramba by his first name.The major general rushes forward, salutes, looks a bit sheepish and promises to correct the mistake.

Mnangagwa then laughs and shakes hands in turn with the officer, Angeline Tongogara and the defence minister and moves off.

Zimbabweans have been impressed by their new president’s handling of the mistake, which could have been missed by a cursory reading of the plaque. Some on social media are hoping he’ll run his government the same way – quickly calling attention to mistakes.

The barracks had kept its name, KGVI, since before independence, in commemoration of the former British monarch, George VI. Three other army barracks around the country are due to be renamed.