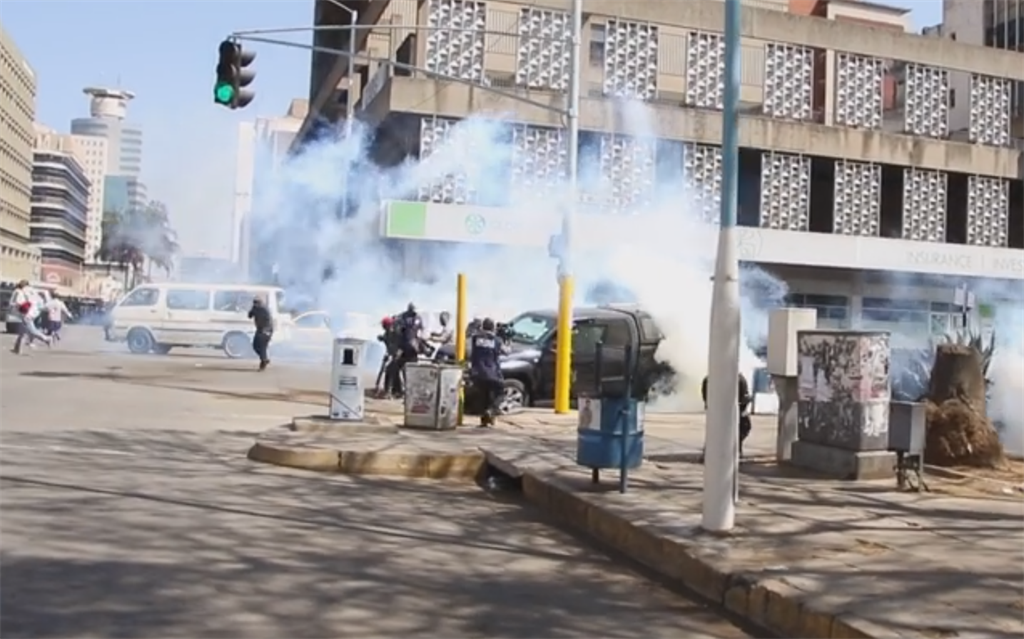 Riot police in Zimbabwe fired teargas and beat demonstrators on Friday during a crackdown on opposition supporters who have taken to Harare’s streets despite a protest ban.

Scores of people gathered in the capital’s Africa Unity Square to demonstrate against the country’s worsening economy in defiance of the ban, which was upheld by a court on Friday.

Police also cornered a group of protesters and beat them with batons, with one women carried into a Red Cross ambulance.

“This is worse than during colonial times,” said a man who declined to be identified.

“We aren’t armed but the police just beat us while we were sitting on the street,” he told AFP.

Dozens of police and three water cannons were involved in running street battles with protesters in the square, which overlooks the country’s parliament and is where thousands gathered in November 2017 calling for Robert Mugabe to step down during a military-led coup.

Friday’s protests went ahead after opposition plans for large-scale marches were banned by police late on Thursday.

An MDC attempt to challenge the ban in court was then rejected.

“The court has said the demonstration should be off,” MDC spokesman Nkululeko Sibanda told AFP.

The party’s vice president Tendai Biti told reporters outside the high court that “we differ respectfully with the ruling”.

“The fascist regime has denied the right for Zimbabweans to demonstrate,” said Biti.

“There is no difference between Mnangagwa and Mugabe. We jumped from the frying pan into the fire after the November coup,” Biti told reporters outside the court.

Emmerson Mnangagwa took over as president from long-time autocrat Mugabe and went on to win the disputed July 2018 elections, vowing to revive Zimbabwe’s economy.

But Zimbabweans say things have gone from bad to worse, with people facing shortages of basic goods and skyrocketing prices.

Around five million people – almost a third of the country’s 16 million population – are in need of aid and at least half of them are on the cusp of “starvation”, the World Food Programme (WFP) said this month.

Armed police had put up barricades across around the city early on Friday in a bid to deter protesters, turning back cars on streets leading to the MDC’s party headquarters.

At least six opposition and rights activists were abducted and tortured by unidentified assailants in the days leading up to the protest, according to the Zimbabwe Human Rights NGO Forum, a coalition of 21 human rights groups.

Friday’s protests are the first since rallies in January against Mnangagwa’s decision to hike fuel prices that ended in deadly clashes with troops.

At least 17 people were killed and scores wounded after the army used force, including live ammunition, to end the demonstrations.