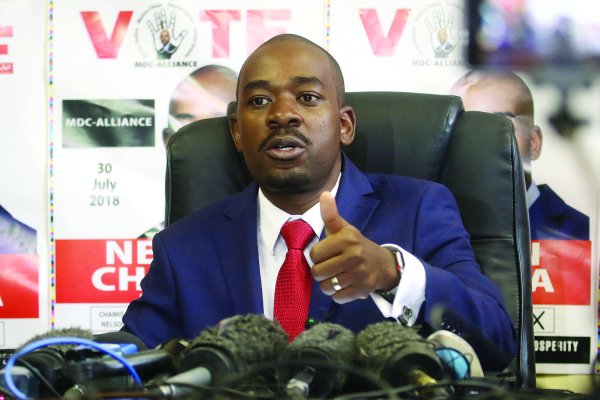 Chamisa, who takes his party to a crunch congress set for May 24 to 26, said the MDC would come out with a slew of strategies to face Zanu PF and ensure that the economics, politics and reform agenda are set right ahead of fresh general elections.

“Why wait for five years. We must begin the journey with the July 2018 disputed elections so that issues of legitimacy are dealt with, issues of parliamentary reforms are dealt with, (and that there is) political dialogue. If there is no political dialogue, we say this and we will say it again, we are going to resort to constitutional avenues and platforms around our rights to express ourselves until what we believe to be the legitimate request is acceded,” he said.

The MDC said it was prepared to meet Zanu PF and its government head-on to ensure that the country’s problems are resolved.

Zanu PF and Mnangagwa have continued to ignore the opposition leader and, instead, are pressing ahead with his government’s economic blueprint, the Transitional Stabilisation Programme.

Mnangagwa initiated his own political dialogue with 17 fringe political parties, some of them with no following, and the dialogue will be officially launched on May 17 without Chamisa.

This has not scared the MDC, which says Zanu PF is not Zimbabwe and cannot be allowed to dictate the destiny of the country with their alleged stubbornness.

Chamisa said after congress, the fight against Zanu PF would be broadened and street protests might become the centre stage to resolve the enduring national crisis.

Today, Chamisa is expected in Mutasa, Manicaland province, to address a campaign rally for the Mutasa Rural District Council ward 10 by-election set for this weekend.

His visit comes after a high-powered Zanu PF delegation visited Mutasa last weekend to campaign for their candidate, Magret Tindika.

Meanwhile, MDC members fighting to lead the youth assembly have promised to bring radicalism and vibrancy into the wing in the fight against Mnangagwa, with one of them pushing for an early harmonised election, claiming that the current administration has failed to arrest the worsening situation.

Zimbabwe is currently battling an economic turbulence that has seen prices of basic commodities shooting beyond the reach of many. The country is due for the next general elections in 2023.