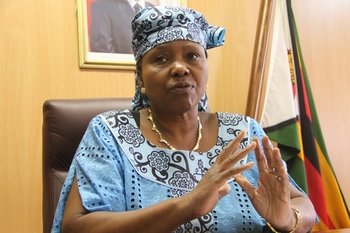 ZANU PF took the first major undertaking in its new life without former president Robert Mugabe, who was toppled in a coup last year, with the party holding chaotic primary elections early this month.

President Emmerson Mnangagwa’s special advisor Christopher Mutsvangwa, who had been pummelled in Norton by a newcomer, went as far as warning that the Zanu PF leader risked losing the elections expected between mid-July and August.

Zanu PF supporters have also been taking turns to hold demonstrations at the party’s headquarters in Harare after their preferred candidates were allegedly cheated in the primaries.

The ruling party is rolling out a big and well-resourced campaign that has seen the acquisition of top-of-the-range vehicles and erection of huge campaign billboards across the country.

Our reporter Obey Martin Manayiti (OMM) spoke to Znau PF’s chairperson Oppah Muchinguri (OM) to understand the dynamics in the ruling party in the aftermath of the coup and on the eve of watershed elections.

Muchinguri, among other things, said Zanu PF did not expect Mugabe to campaign for Mnangagwa because he was now too old.

OMM: There is confusion over the outcome of the recent Zanu PF primary elections with reports that you were one of the bigwigs that fell by the wayside in Manicaland. What is the true position?

OM: There is no confusion at all, given that 90% went through, and complaints came from only 10% of the areas where elections were held, a sign that we prevailed and are now ready for elections.

Zanu PF is a democratic party with clear policies and rules and regulations for the conduct of primary elections and as we went for the elections, we were guided by these.

As you might now be aware, in all the areas where rerun elections were held, the results remained unchanged.

As a party, we are now working towards uniting all candidates and moving forward with the best interests of the party in mind.

Responding to the second part of your question, indeed I lost, but only in one constituency, while I won resoundingly in the other constituencies, thereby emerging the winner.
It is unfortunate that some unruly elements went on a rampage mudslinging me on social media. If I had lost, I would have conceded defeat as a seasoned politician. I have lost before, that is in 2008, but I never forced my way into the system.

OMM: Some losing candidates, including Mnangagwa’s special advisor, Chris Mutsvangwa, allege there was massive rigging in the polls. What is your comment on that?

OM: Unfortunately, I cannot answer on behalf of Cde Mutsvangwa or any other losing candidates.

What I know is as a system, everything was above board, except for a few logistical challenges, harassment of voters in some areas and names not appearing on ballot papers.

It is, however, important to note that this electoral process was very democratic, where any member was allowed to contest and cell registers were used.
This might not have gone down well with some party members who would have been comfortable with not being contested, hence all this confusion.

OMM: Where is Zanu PF getting the money it is spending on giant election campaign billboards and campaign regalia when it is known that the party is in the red?

OM: The party is well-resourced; remember it is a private entity with a lot of investments.

The party also has a huge membership and we get subscriptions from our members.

We also have local partners who donate to the party. I am surprised where you are getting this assertion that Zanu PF is in the red because as far as I am concerned, no audit has been conducted to prove this.

OMM: Are there any foreign governments funding Zanu PF?

OM: Not to my knowledge.

OMM: How about reports that some businesspeople known to be involved in shady deals are bankrolling Zanu PF to get protection?

OM: Zanu PF under the new dispensation does not tolerate corruption and our theme for this year’s elections states that: “Fight Corruption”, hence there is no way we would want to be seen associating with thieves.

If you have knowledge of these, we would want them brought to our attention so they are brought before the law

OMM: As Zanu PF chairperson, what are you doing to instil discipline in light of the havoc caused by the primary elections?

OM: As you might be aware, I am also the chairperson of the party’s national disciplinary committee.

As such, we have been dealing with all the appeals brought to our attention individually and appropriate action will be taken.

Investigations will be carried out to confirm or refute allegations surrounding the conduct of the primary elections.

We will also ensure that appellants get redress while perpetrators are brought to book.

All this will be done in the best interests of the party, with a bid to ensure that the party remains a united front.

OMM: There are reports of the emergence of factions in Zanu PF aligned to the military and civilians. What is your comment on that?

OM: As a party, we have not witnessed this as yet. It is common knowledge that wherever there are two or more people, conflict is likely to arise
However, as a party we have our means to resolve conflict. As you are aware, factions in the party were caused by (Mugabe’s) succession issue but since we chose a leader supported by everyone, we have not heard of factions.

These might just be individual perceptions of people bent on seeing Zanu PF divided.

I, however, want to assure you that Zanu PF has never been this united and we do not foresee any factions emerging in the near future.

OMM: Do you see Mugabe campaigning for Zanu PF ahead of elections?

OM: He is retired and we respect him as our leader who led us for 37 years but we appreciate he needs to rest.
It is unfair for us to expect a 94-year-old to campaign for us. We are content with the contributions he has already made.

OMM: Are you worried that Mugabe is rallying the opposition to challenge Mnangagwa?

OM: All this is circulating on social media and we cannot depend on hearsay.