‘We feared Mugabe would be dragged through streets like Gaddafi’: ex-spokesperson 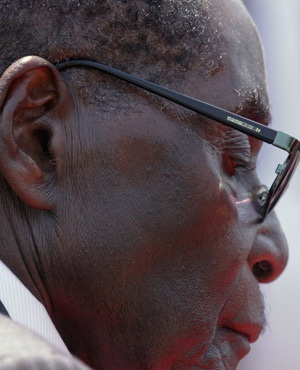 Source: ‘We feared Mugabe would be dragged through streets like Gaddafi’: ex-spokesperson | News24

Harare – Robert Mugabe‘s ex-spokesperson has revealed how the former president was told in November that he could face the same fate as the late Libyan dictator, Muammar Gaddafi if he refused to step down.

George Charamba said he had to warn Mugabe of this possibility during tense negotiations that he helped broker between the former president and the army.

“The commanders sent us with a very chilling message, they said ‘please go and get the president to appreciate the gravity of the situation out there’,” Charamba told the Daily News on Sunday.

“There was the possibility of a Libyan scenario where the president would have been dragged out of the Blue Roof (Mugabe’s Harare home) and lynched. It was going to be possible because the soldiers said ‘we cannot turn our guns on civilians who are marching against the president and spill blood’,” Charamba added.

Gaddafi, a former friend and ally of Mugabe, was killed by opposition fighters in Libya in 2011.

Charamba said Mugabe had been insistent he wouldn’t step down in the wake of the November army action, even under threat of impeachment by MPs from the ruling Zanu-PF and the opposition MDC. He said the president was adamant he hadn’t committed any crimes.

But Charamba said he had to remind the 93-year-old that there were “other dimensions” threatening his hold on power, including the peaceful protests that saw tens of thousands of Zimbabweans pour out onto the streets of Harare in support of the army.

‘Harm to your well-being’

“I said shefu (leader), you are concentrating on one dimension; there are others which are there which indicated harm to your well-being,” Charamba quotes himself as telling Mugabe.

Eventually Mugabe handed in his resignation on November 21. This put a stop to the impeachment process, and triggered street celebrations that went on through the night.

Mugabe has since been assured of his safety by the new government of Emmerson Mnangagwa and awarded a generous retirement package.