We must emulate China’s  anti-corruption strategies 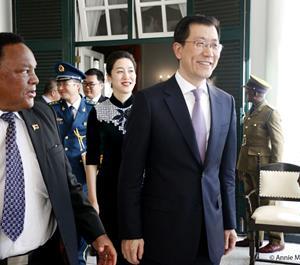 In fact, corruption is so deeply embedded in all facets of our life be it
political, religious, business, social etc. Corruption is like a malignant
cancer rapturing and tearing apart the very fabric of our existence as a
nation.

Corruption is the abuse of entrusted power for private gain. It can be
classified as grand, petty and political, depending on the amounts of
money lost and the sector where it occurs.
From your small-time illegal foreign currency dealer on the street corner,
to your vacuous and vapid but extremely powerful and well-connected
politician in the ruling party or even within opposition political
parties, corruption is widely being practised in Zimbabwe.

It has now become a national curse, a sordid and deprecating badge of
shame and dishonour.
Corruption is stinking to high heavens. Unless and until we adopt and
implement effective measures and strategies to identify, clamp down and
eventually reduce or even eliminate corruption, Zimbabwe’s national
economy will continue to tank and in the process, causing massive public
disaffection, disharmony and discontent.

Put simply, corruption in Zimbabwe has now effectively degenerated into
becoming a very serious and alarming national security threat.
Business cartels and monopolistic and greedy but insipidly corrupt
informal networks have since sprouted within the private sector to such an
extent that the prevailing unrealistic and random increase in the prices
of basic goods and services can easily be linked to the emergence of these
corrupt but extremely powerful business cartels. Something surely has got
to give.

We cannot continue on this ruinous and self-destruct route that is causing
untold misery and suffering to the majority of Zimbabweans.

In one of my recent opinion pieces, I boldly stated that I always speak
truth to power and as such, I am not going to spare the blame that also
involves very senior government officials and top-notch business
executives in the private sector.

We have got absolutely no other viable option but to be ruthless and
uncompromising when it comes to dealing with and thwarting corruption or
else the much publicised government’s anti-corruption onslaught will be
nothing but an embarrassing and humiliating flop.
Thus, we shouldn’t only denounce corruption in word; we should also be
seen to be effectively uprooting the cancer of corruption within our midst
and in the process, firing corrupt public officials and also ensuring that
the full wrath of the law descends upon all corrupt officials in both the
public and private sectors.
Let us learn from and indeed, emulate other countries that are apparently
succeeding in fighting graft.

A far-reaching campaign against corruption began in China following the
conclusion of the 18th National Congress of the Communist Party of China
in 2012.
The anti-corruption campaign under Chinese President Xi Jinping has since
gone a gear up and a significant number of senior public officials have
been caught and dealt with in the anti-corruption dragnet.

This anti-corruption onslaught was arguably the largest anti-graft effort
in the history of Communist rule in China.
President Xi Jinping, upon taking office, vowed to crack down on “tigers
and flies”, that is, high-level officials and local civil servants alike.

As of 2016, the campaign has “netted” over 120 high-ranking officials,
including about a dozen high-ranking military officers, several senior
executives of State-owned companies, and five national leaders.
More than 100 000 people have been indicted for corruption.

The campaign is part of a much wider drive to clean up malfeasance within
the Chinese Communist Party and shore up party unity.
It has become the emblematic feature of President Xi Jinping’s political
brand.

Nearer home on the African continent, Rwanda and Cape Verde are the
leading African countries in the war against corruption.
They tied at position 48 out of 180 nations with 55 points, in the
Transparency International’s report of 2017 rankings. Zimbabwe is located
way down the perking order. We have got to pull up our socks and deal the
cancer of corruption a ruthless sucker punch.
Rwanda is often touted as an example of what African countries could
achieve if only they were better governed.
Out of the ashes of a horrific genocide that killed about 800 000 Tutsis
and moderate Hutus in a short 100 days in 1994, President Paul Kagame has
resuscitated the economy, curtailed corruption and maintained political
stability.
Of course, some critics have argued that Kagame has sacrificed basic human
rights such as freedom of expression and freedom of association to sustain
the ruling party’s political hegemony.
But there is absolutely no denying that Rwanda is one of Africa’s
economic success stories.
Going forward, we expect heads to roll as the anti-corruption onslaught
gathers momentum in Zimbabwe. Failure is not an option and defeat is not
on the agenda.

Gutu is a Zimbabwean lawyer. He is also the MDC-T Vice president and the
founder and Executive Director of the Negona Legal Consultancy & Public
Governance Institute LLC.