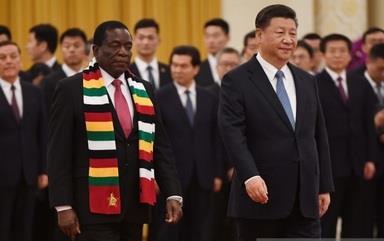 HARARE – President Emmerson Mnangagwa’s recent trip to China did not yield
major deals as what some people and the media want us to believe.

The president met his Chinese counterpart Xi Jinping at the 2018 Beijing
Summit of the Forum on China-Africa Cooperation (Focac) where the two
leaders are said to have signed three deals.

While the deals were indeed signed these will not have an immediate impact
on our ailing economy that is yawning for a major injection of funds.

Interestingly, according to Foreign Affairs and International Trade
minister Sibusiso Moyo the first deal was of “immigration and that
agreement was meant to have the possibility and provide a framework of
exchanging prisoners who would have committed offences on either side.”

Yes, these are the three deals that Mnangagwa and his high-powered
delegation managed to sign when in China!

While I am not against signing such deals, I also believe these are just
small deals that we should not celebrate about especially given the state
of our economy; the poverty and joblessness that our youths are
encountering every day.

These deals are not anywhere near the $2 billion that Zimbabwe is looking
for that can bail us out and kick-start our economic growth.

I am happy though that as these big industrialised countries keep shutting
their doors, Mnangagwa has also looked elsewhere, hence his engagement
with Britain and other international financial institutions.

The president has also to look at the local businesses and engage them for
solutions, it works at times and we are the best drivers for this economy.

We are happy that he has chosen his new Cabinet which fits with his agenda
and direction because he has the compass.

What we can only do is help those he has appointed to these posts so that
the next five years can be as fruitful as possible.

We hope the new Cabinet will work on the required reforms that can soften
the stance of countries like China, US and the UK.

Our lives are in our own hands because we know what these countries
require of us so that they can release the much-needed finances.

Sadly, like in the past Mnangagwa has failed to listen to most of us who
had called for an inclusive government because what he has just done is
recycle Zanu PF guys; some of whom we had already forgotten!

It is good we have a Cabinet and these guys have to roll their shirt
sleeves and start the work at hand – there is no time to relax because the
house is burning.

We also hope that the president will keep his word when it comes to
devolution because we are eagerly waiting to see how he will manage this.

And thanks to him for having a small Cabinet; yes, 20 ministers are
manageable and we hope they will push together.

Like I always say and I am proud to say it; Zimbabwe is for us all, we
need to enjoy it together!