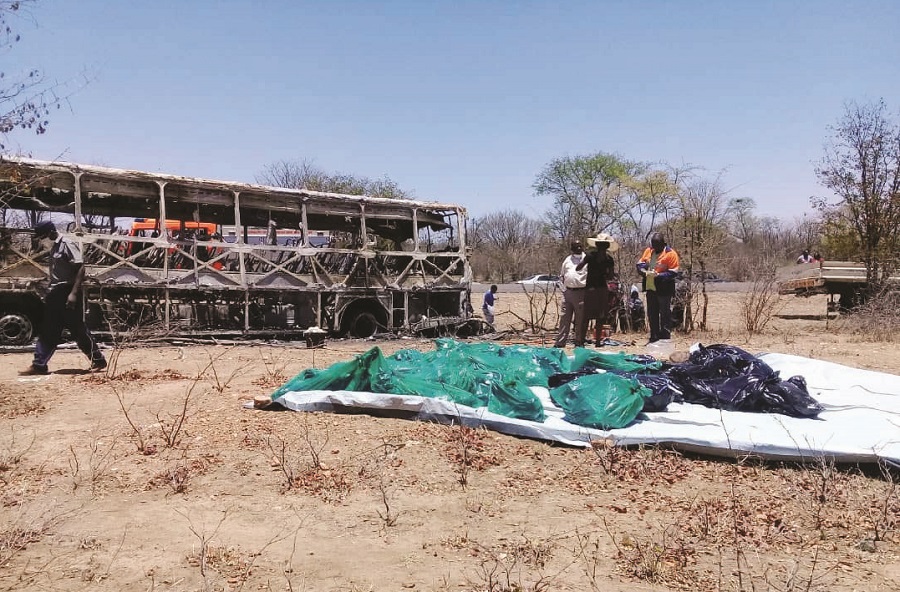 A SOMBRE atmosphere fills the air as relatives and passers-by watch in disbelief at the charred remains of a bus which has somewhat been turned into a mass grave.

The remains of people that have been reduced to ashes lie scattered all over in an incident that would haunt many for a long time. A journey that had become a routine for many cross-border traders turned out to be the last when they were caught up in the inferno that engulfed the bus.

Police officers, Red Cross workers and Fire Brigade crew work with so much precision as they sift through the debris in a bid to make out and recover what is left of the victims who perished in this horrific incident. After several hours of working the officers manage to gather the remains and pack each body in a plastic bag.

On Thursday around 11pm a Musina bound Brooklyn Express Bus caught fire at the 182km peg along the Bulawayo- Beitbridge Road near West Nicholson area in Gwanda following a suspected gas cylinder explosion. A total of 33 people were burnt to death while 27 sustained injuries. The bus was mainly carrying cross-border traders from Zvishavane, Insiza and Gwanda districts.

As news of this unfortunate disaster spreads across the country and beyond anxious relatives now trickle to Gwanda Provincial Hospital health information centre to check on the status of their relatives. Mrs Pauline Ncube of Freda Mine in Gwanda rushes to the information desk with hope that her 23-year-old niece could be among the injured. She is assisted by officers from the Zimbabwe Republic Police who search for her niece’s name on the list of 27 patients that were handled by the hospital. To her despair Mrs Ncube does not find the name on the list.

“My niece boarded the bus in Gwanda, she was going to buy some groceries for her family since prices for most basic commodities have gone up here. She was like my own daughter because her mother passed away sometime back and I looked after her until the time she got married. After we heard about the fire incident her husband went to the scene but failed to locate her among the injured. When I came here I had hope that there could be a chance that she was still alive but now it seems I was wrong. They have referred me to Bulawayo for a DNA test. The thought of my sister’s child wailing in agony as flames consumed her breaks my heart- she died a painful death,” said Mrs Ncube as tears filled up her eyes.

A woman who survived the horrific incident, Mrs Ntombizodwa Ndlovu (38) from Harare said there was a lot of jostling and shoving as passengers tried to escape through windows and the door. She said there was little time for one to escape the fiery flame that was spreading fast. Sitting on a hospital bed Mrs Ndlovu recalled how the fire started.

“I was sitting towards the back of the bus and I could smell a gas like chemical. At that time I wasn’t alarmed and assumed that it was a minor problem which crew members would check on and rectify, little did I know that the worst was about to happen.

“I heard a loud explosion and saw a huge flame which originated from the front of the bus heading towards the back. I panicked and at the same time I was afraid and confused. It quickly dawned on me that I had to escape through the window. I tried to open a window next to where I was seated but it failed to open. I managed to escape through the next window,” she said.

Mrs Ndlovu said in her bid to escape she landed on the ground on her back and sustained some injuries. She said a good Samaritan pulled her to her feet and dragged her to safety. Mrs Ndlovu said when she looked back she realised that her peers she was travelling with were still trapped in the bus. She said there was nothing anyone could do as the bus was engulfed in flames.

“The flame was too huge and we had to maintain distance. I was terrified and at the same time I had pain in my heart as I had to stand and watch numbers of people burn to ashes before my eyes. We could literally see some of the people trying to make it to the windows but they couldn’t beat the flames. This is a traumatic incident as I have never witnessed such a horrific incident before. I’m grateful that I escaped but saddened by the lives that were lost,” she said.

Mrs Ndlovu said she was on her way from Zvishavane to buy some wares in Musina, South Africa. She said she lives in Harare but passed through Zvishavane to visit her sister before boarding the Brooklyn Express Bus. Ms Simangaliso Ndlovu (39) of Mberengwa District said she boarded the bus in Zvishavane and was also on her way to buy wares from Musina. She said cross-border trading was her source of income. Simangaliso said she also had to escape through the bus window. She sustained minor burns while attempting to flee.

The driver of the bus, Mr Ndabezinhle Sikhosana who escaped with minor burns said he did not know what could have caused the fire but there was a smell of gas which was followed by an explosion which originated from behind his seat then a flame filled the whole bus. It is suspected that a gas cylinder caused the fire.

Matabeleland South Civil Protection Unit Committee chairperson who is also the Provincial Administrator Ms Sthandiwe Ncube said the Government has availed $16 000 for funeral expenses. Ms Ncube said families would be given the money after undergoing a DNA test.

“Government has so far availed $16 000 to assist bereaved families. Each deceased person will be allocated $500 which will only be released after a DNA test to confirm that the person is their relative. As the CPU we have set up a health information centre at the Gwanda Provincial Hospital which comprises various stakeholders such as ZRP, Social Welfare, Local Government, Ministry of Women Affairs, Registry, Ministry of Health and counsellors to help survivors and those who would like to make enquiries,” she said.

This incident comes a week after 47 people died in a horrorific accident involving two buses which occurred at the 166km peg along the Harare-Mutare Highway. In June 2017, 43 people died along the Harare-Chirundu Road after a speeding bus driver failed to negotiate a curve. In August 2018, 13 people died when a commuter omnibus going towards Kadoma made a sudden about-turn in front of an oncoming bus.

According to the Traffic Safety Council of Zimbabwe, 1 838 deaths were recorded in 2017 due to road accidents; and as of March 2018, the number of people killed had risen by 31 percent compared to the same period last year.

The TSCZ also indicated that road crashes increased by 24 percent from 33 136 recorded between the January to August period last year to 41 155 this year. Fatalities in the same period rose to 1 483 from 1173 in the same period a year ago. This comes at a heavy economic cost. Losses from road traffic accidents are estimated at $400 million annually.