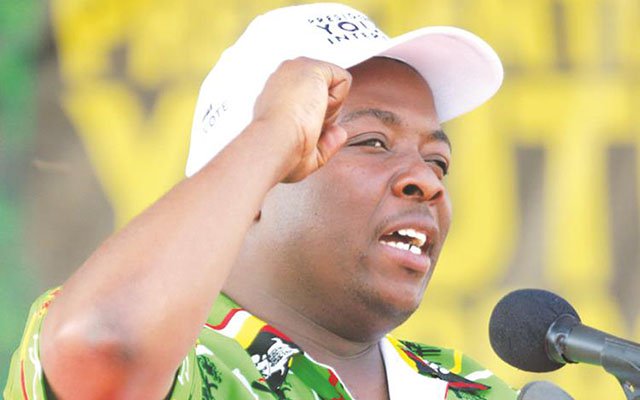 Herald Reporter—
The Zanu-PF Youth League says it will stand by President Mugabe in the face of any threat to his position as the constitutionally elected leader of Zimbabwe. Secretary for Youth League Affairs Cde Kudzanai Chipanga told journalists at a press conference in Harare yesterday that young people would not allow anyone to interfere with President Mugabe’s leadership.“As the youth, we are in our millions and at present, the majority in the country,” he said.

“It is our country and future at stake and we will not let any individual military man interfere with the leader of the party and legitimately voted President of this country, Cde Robert Gabriel Mugabe. All those in security sector fatigues who wish to engage in politics are free to throw their hats in the ring and not hide behind the barrel of a gun. We the youths of Zimbabwe constitute the majority of the population in our millions and it is our future which is at stake. Freedom is a non-negotiable birthright bestowed upon us by the revolution.
WATCH VIDEO

“It is a tree that was watered by the blood of thousands of liberation war heroes and common people most of whom lie in mass graves. This liberation and fundamental rights which came at such steep price cannot be the personal property of one rogue element in the security sector with power to give it and take it at will. No single person has the power to impose his minions to leadership positions. This is an assault on our freedom as we now have a new Constitution which places solders in barracks and civilian authority in power. We, therefore, call upon all the youth of Zimbabwe regardless of their political affiliation, race, gender or creed to stand up and be counted when the time comes.”

Cde Chipanga said the youths were prepared to die defending President Mugabe. Said Cde Chipanga: “We are, therefore, taking a stand against those who are bent on sowing division among our people and also those taking advantage of the privilege of their appointment by our President to extort guarantees and immunity for fugitives, boarder (sic) jumpers from the same appointing authority.

“These people should be warned that we the youth are watching in our millions and those who wish to ride on the back of the tiger will end up inside. As a revolutionary party, Zanu-PF is evolving and placing itself at the forefront of the constitutional dispensation we fought the oppressor for and obtained.”