We’re all in this together as a nation 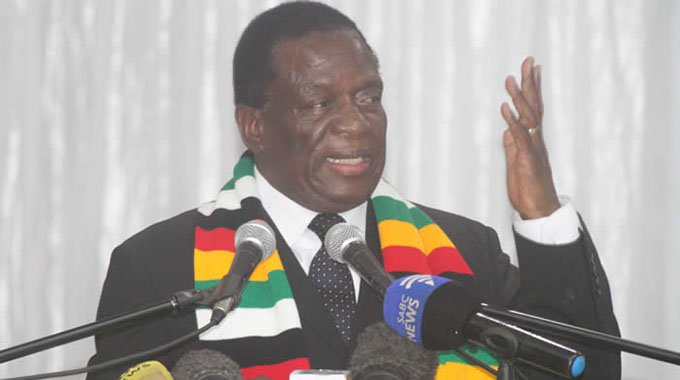 This should be the slogan as Zimbabwe finds her feet, and her people find each other. Yes, President Mnangagwa should lead, but we all have a part to play. One man can only do so much. And for a man who has only been at the helm of Government for just over 100 days, he has covered a lot of ground.

Predictably, President ED’s short reign has not been without unjustified criticism. However, those who throw dirt lose ground, as the old saying goes.

The President knows better: he will continue to stand his ground and not waste “dirt”.

True to his word, President Mnangagwa on Monday named and shamed corporates and individuals that failed to return nearly $1 billion they externalised in the past years, despite Government giving them a three-month amnesty.

The list has 1 844 externalisers and most of the looters are in mining, agriculture, manufacturing and cross border freight.

But the haters are far from amused. They wanted certain names to be on the list. If these names are not on the list, it is invalid. To such sceptics, the only truth is in seeing the full complement of Zanu-PF Politburo members on the externalisation list.

Never mind the fact that if indeed some of President Mnangagwa’s ministers were foul of the country’s foreign currency laws, they could have complied within the moratorium period, which expired on Friday.

Otherwise where did the $591,1 million, which was recovered under the amnesty all come from? Clearly, some individuals and corporates complied, regardless of whether they belonged to Zanu-PF or were ministers or not.

In any case, to dwell on who is missing, instead of who is present on the list of looters is to miss the whole point of such a noble exercise.

Give a man praise when he deserves it; ED delivered. It’s now up to the rest of us to move forward together in ensuring that no foreign currency is looted through non-repatriation of export proceeds, payment of imports not received in Zimbabwe and funds banked in foreign banks in cash or under spurious circumstances.

Also on Monday, the President pledged legislative support for a conducive investment environment. He was speaking at the commissioning of a filling line on the Cremora plant at Nestle Zimbabwe’s Southerton factory in Harare.

The investment in the plant came after President Mnangagwa secured commitment from Nestle’s executives during his trip to Davos, Switzerland, for the World Economic Forum in January.

In other words, the President brought tangible investment into the country following the historic Davos trip. Where are all the cynics? Is it unnecessary travel when a single trip results in a whole production line that will create/secure jobs and generate income for the foreseeable future while giving us a local product?

The Head of State has led by example, but he alone cannot bring in all the investment Zimbabwe needs. Instead of throwing dirt, we can all play our part.

As the president attended a business forum preceding the African Union Extraordinary Summit sessions in Kigali, Rwanda yesterday, the dirt throwers were at it again.

This time they claimed that President Mnangagwa had been barred from attending the AU Summit sessions. And such shameless propaganda against the backdrop of the success of the World Economic Forum. Instead of loitering around, the President is seeking more “tangible” investment opportunities.

Zimbabwe is not an island, worse, it cannot separate itself from what happens in Africa just to please misguided eurosceptics. The President will continue to shame his detractors, who are more concerned about grandeur than opportunity — to them sitting at the high table during pre-summit sessions is more important than meeting investors.