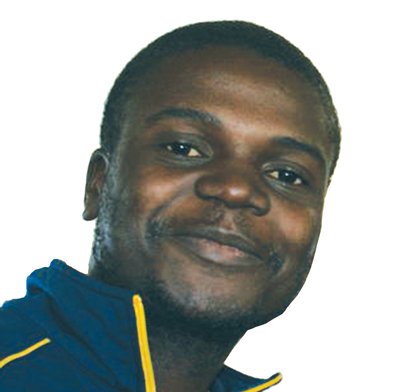 FRANKIE Fredericks is what Kalusha Bwalya is to Zambia, his country’s greatest ever sportsman.

The four-time Olympic silver medallist from Namibia took his place in history over two decades ago — at the peak of his sprinting powers — and it is hard to believe how a modest African country of just 2,5 million was able to carry the hopes of an entire continent for so long, in a sport of such rich heritage. And the name Frankie Fredericks will echo down generations in a discipline whose global appeal has been boosted by the virtuoso exploits of the irreplaceable Usain Bolt.

A blight on Fredericks’ career, of course, was the inability to shed the bridesmaid tag — four silver medals and never once an Olympic champion.

Prior to South African Wayde van Niekerk emerging onto the scene like a bullet train out of a tunnel, Fredericks had simply been Africa’s best on the track.

While many have tipped van Niekerk to even take over from the now-retired Usain Bolt as the poster boy of international sprinting, that it took this long for Africa to produce another real force in sprint speaks volumes of Fredericks’ class in his heyday.

Additionally, while van Niekerk turned himself into an Olympic champion in Brazil two years ago — shattering along the way a world record once held by the maestro Michael Johnson — much older folk will however fondly remember how Fredericks was actually able at some point to take on Johnson in his pomp, twice defeating the great American in crucial races. And also how, to this day, 20 years later, the Namibian still holds the 200 metres world indoor record.

That definitely is no mean feat for an African athlete, or any other for that matter, a beautiful story that must end well. Quite unfortunate, it has not ended well for Fredericks, who last year was provisionally suspended by both the International Association of Athletics Federations (Iaaf) and the International Olympic Committee (IOC) pending investigation into alleged corruption. Charges are that Fredericks received some US$230 000 from the son of disgraced ex-Iaaf president Lamine Diack, believed to be part of an instalments of bribes paid to different leading athletics personalities to influence the vote for the 2016 Summer Olympics host.

Fredericks had initially resigned from his position as the head of the 2024 Olympic bidding process and as a council member of the Iaaf, when the allegations first broke out.

Now 15 months after Fredericks faced the music, charged with money laundering and corruption, another prominent African sporting personality, again from our southern parts of the continent, has been slapped with a sanction likely to undermine the integrity on which a career and personality were built for many years.

And just like Fredericks, Bwalya had become an influential global figure in his chosen sport — an executive committee member of the Confederation of African Football (Caf), and a rising star in the governance of football on the planet.

The former African Footballer of the Year and ex-Zambian football federation boss was banned by Fifa last week for two years for his role in the Qatar 2022 bribe scandal where he pocketed US$80 000.

Of course, being banned from a game that has given him global fame, pretty much everything he has — even if it is just for two years — is a cause of huge embarrassment for Bwalya, his family and friends. And do not forget the fans, too, and there are many of them including here just across the border in Zimbabwe. The most loyal of the fans will be more than embarrassed, actually, by the dramatic turn of events. They will be disappointed and hurt.

Society, more and more these days, considers sports stars as heroes and role models. It is greatly disturbing when things turn out this way—when the darker side of famous people we thought we knew well, people we adore, spills into the public arena. It is certainly troubling to see a desperate e-mail from the great King Kalu, one of our region’s first modern superstar footballers — in an hour of great need, perhaps an hour of great greed — being reduced to literally begging for US$50 000 from the super-wealthy and very controversial Mohamed Bin Hammam, quite well aware of the Qatari tycoon’s compromising interest in the Fifa presidency and World Cup bids that were to follow.

Once again, this further brings to light the plight of famed ex-sports stars from this continent who excelled in the pre-big money era. Given the chance, if one thinks he will not be caught, an average financially unstable yesteryear hero with some sort of influence is prone to exploitation and underhand payments. The worst tragedy is that when such breaches of professional ethics are committed, the decisions that are made are predetermined: not always in the best interest of sport and spirit of fairness.

Corruption in sport is a scourge that will not go away overnight. A very great number of people worldwide are ensnared by it, others as means of survival, others out of pure greed.

In one sense, the aftermath of such a devastating development — that period of great personal anguish like has befell Bwalya — ultimately tends to influence the course that life takes thereafter.

With others the end result is total oblivion, and in the case of others — if you believe in fate and destiny — it can be worse.

Remember Hansie Cronje, the shamed former South African cricket captain and pin-up boy. Two years after he was banned from the game for life after a match-fixing scandal, Cronje was killed in an aeroplane crash in 2002 at the age of 32 — bringing an abrupt and violent end to the life of a one-time true sporting hero of an extremely proud sporting nation.

Just a year ago in our own country, former national football team player Edzai Kasinauyo died rather suddenly, months after courts had however found him and others not guilty of match-fixing after the Zimbabwe Football Association (Zifa) levelled allegations of a scandalous plot to manipulate crucial national team matches.

For those who believe that fate is pre-determined — those amongst us who prefer to give a deeper spiritual meaning to life — there is a case to be made here of what may have happened to Kasinauyo in the wake of those extremely damaging allegations and in his last moments of life.

Here was a former international footballer, successfully transformed into an administrator and a player agent of repute — priding himself in his extensive international networks and professional integrity — and now having a name dragged through the mud by the worst possible allegations a sports business executive can ever face.

Of course, such repercussions can never be wished on anyone. To err is human.

Everyone, after all, deserves a second chance. Even for those that may begin to realise the error of their ways only in retrospect now — when they might have genuinely thought they were not doing anything terribly wrong — like Fredericks and Bwalya, there surely should be a chance for some form of redemption.

In both cases, for the two men, the good overrides the bad. What they achieved in their respective sporting disciplines can never be wished away. Athletics and football will always reserve a special place for these two icons of African sport.

But, more importantly, let this be a lesson to all those that care so much about reputation. Once lost, it may never be reclaimed.

Newer Post
Selfies with soldiers; no one shot at us then
Older Post
Zim ConCourt sets date for MDC’s election results case